In many ways the fledgeling 2015-16 season is evoking the memories and spirit of Roberto Martinez's first season in charge, one in which some feared David Moyes's successor would struggle but instead he steered Everton to a Premier League record points haul, a fifth-place finish in the Premier League and qualification for a Europa League adventure that ended up being the highlight of an otherwise forgettable year last term.

The fearlessness and the never-say-die attitude that oozed out of recent performances like those against Southampton, Chelsea and West Bromwich Albion harked back to 2013-14 and with the return of Gerard Deulofeu, there is a familiarity about the personnel from that campaign too. With one notable exception: Kevin Mirallas.

Between August 2013 and the end of February 2014, the Belgian played a part in every Premier League fixture under Martinez, essentially until the Catalan began rotating his forwards in an effort to keep the side fresh for a run-in that still held the promise of Champions League qualification. He would finish the campaign as Everton's second-highest goalscorer in the League behind compatriot Romelu Lukaku (a feat he repeated last season) and, as a component in a counter-attacking unit that would tear the likes of Arsenal and Manchester United apart in scintillating home wins that April, he was rightly regarded as vital to the way the Toffees now played.

How things change. He has had his share of medium-term injury lay-offs over the past three-plus seasons, periods where Everton have been robbed of his mercurial talents for long stretches by soft-tissue injuries, but it's possible that, even though he is currently fully fit, Mirallas is at the lowest ebb of his time with the Toffees so far.

He has made just one League start so far this season, been sent off less than two minutes after making a late substitute appearance at Swansea – picking up a three-match suspension as a result – and been dropped entirely from Belgium's squad for the most recent Euro2016 qualifiers. He returns to eligibility for Everton's home clash with Manchester United this weekend but the odds of him starting ahead of Aaron Lennon or Gerard Deulofeu would surely be long... this for a player who, on his day and alongside his compatriot Romelu Lukaku, is arguably the club's most effective and dangerous player.

Mirallas is a fan favourite, too. Though his inconsistencies and suspect temperament are acknowledged, social media and fan pages are filled with supporters pining for the 28-year-old to be a consistent part of Roberto Martinez's first-team line-up. They rightly question why a player with his ability can sit unused on the bench, sometimes for the entire 90 minutes, when there is a match just begging to be won.

Evertonians appreciate a match-winner, a player who can get them off their seats in anticipation and turn a game single-handedly. It's why we took to Gerard Deulofeu so readily despite his own inexperience and mixed performances and it's why Mirallas's new contract was so widely welcomed over the summer. His decision to tie himself to the club for another three years seemed to put an end to any notion that he wanted away and signalled that any difficulties he may have had with the manager this year had been put to bed.

They may well have been, but his lack of playing time over the first seven games of the season for which he has been available suggests, perhaps, that either everything is not completely rosy in his relationship with Martinez or the Catalan's faith in him as a reliable, committed member of the team has diminished. Perception is becoming reality on that score, even if the new campaign is still yet young and there is ample time for the forward to fight his way back into regular contention.

His declining number of minutes played continues a trend established at the beginning of April and following his return from injury where the combination of Aaron Lennon's arrival on loan from Tottenham and Martinez's shift away from playing two wide players restricted his opportunities. 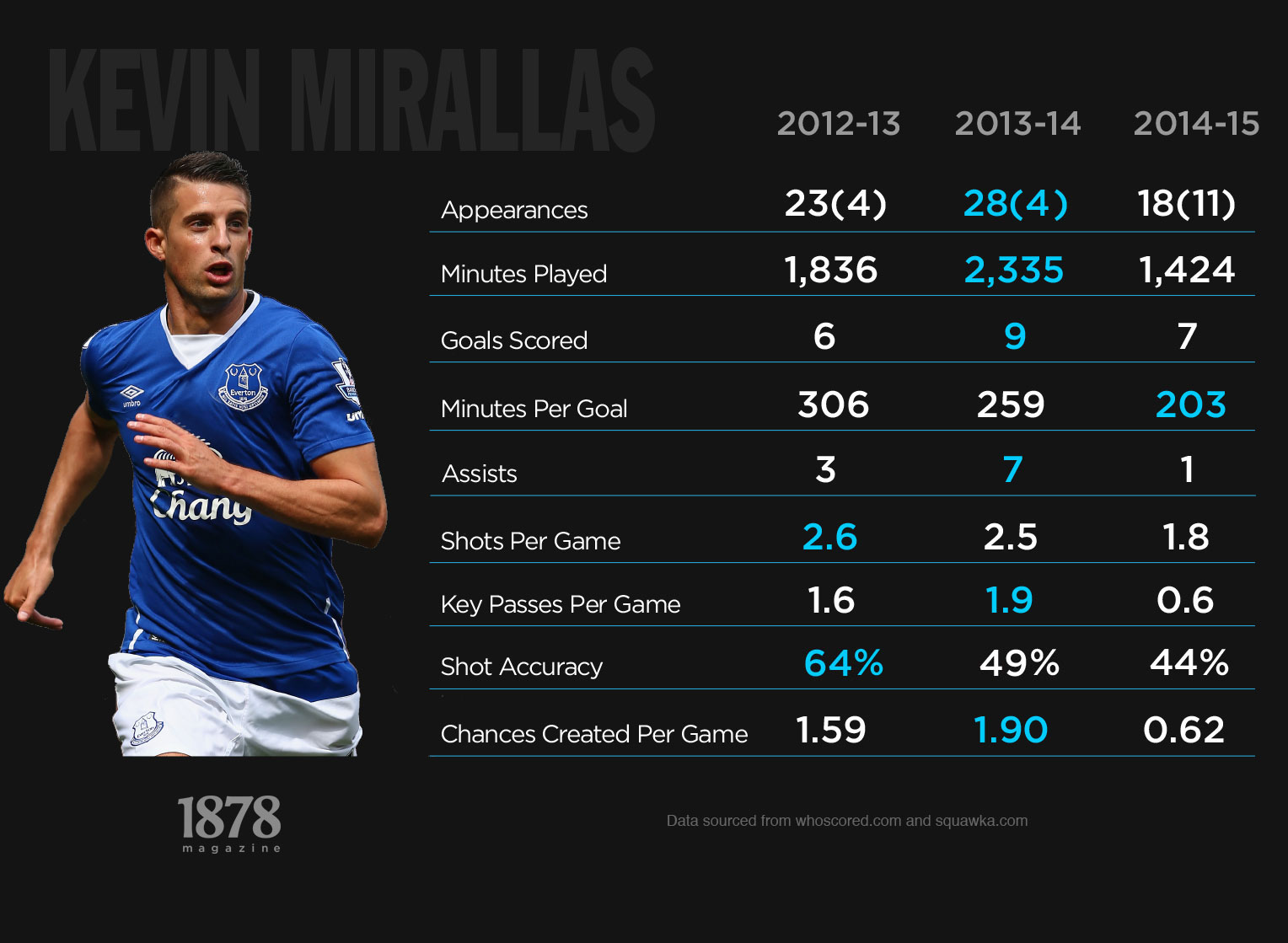 Bubbling in the way in the background were suspicions, denied by Martinez, of fractures in Mirallas's relationship with his manager following his decision to break established penalty-taking protocol and assume responsibility for a spot-kick against West Brom that he subsequently missed and, given the Blues' inability to score from open play for the other 89 minutes, effectively cost them three points at a time when they were badly needed.

It didn't help that the former Olympiakos player then publicly declared his desire to play Champions League football in 2015-16 at a time when, the Europa League aside, Everton's chances of achieving that particular Holy Grail had been obliterated by an awful season that had them looking down the Premier League table by that stage of affairs instead of up. Again, Martinez rejected suggestions that he had any problems with Mirallas, claiming his comments were taken out of context or mixed up in translation. The fact that the player would make just three starts in the final eight games of the season, however, and then play just 123 minutes so far this season has been taken by some as an indication that all was not right between the two behind the scenes.

In between, of course, Mirallas has signed a new deal that extends his stay at Goodison for two years longer than the additional season Everton invoked from his first contract when he joined the club from Greece in 2012. The more cynical remarked that the lack of any real suitor able to offer him Champions League football had forced his hand but there is something to be said for stability, familiarity and the burgeoning feeling voiced by Lukaku and Deulofeu that Martinez is still building something exciting at Everton. Mirallas indicated as much in his comments after the new contract was announced, saying that, "This is a club that wants to win trophies and compete in European competition," and in many respects it was probably an easy decision to stay.

Few on the outside of Finch Farm will know for sure just where Mirallas's head is at the moment, whether he feels that he is at the nadir of his time at Everton and whether, as a report in his native Belgium hinted last month, he is regretting inking that new deal because Martinez has reneged on promises to give him a more prominent role in the side. Certainly the arrival of the more consistent – if less dynamic – Lennon and the up-and-coming Deulofeu on permanent transfers this summer have not helped his cause in terms of getting regular playing time. Did any building frustration manifest itself in that clumsy tackle on Modou Barrow at the Liberty Stadium?

It's possible, because Mirallas appears to have been imbued with some of that stereotypical Latin temperament in his part-Spanish blood. It is, no doubt, what makes him such a wonderfully gifted player when he's at his best but could also make him prone to self-doubt and feeling hard done-by. He revealed in February last year how some harsh words from his father Jose had helped him shift his mentality and become a more consistent player for Everton. There was plenty of evidence of it that 2013-14 season, too – arguably his best in a Blue jersey apart from the Europa League campaign last term in which he came into his own as a creative and goalscoring threat – but that consistency seems now to be in short supply. Though he hasn't had much time to demonstrate it so far this season in the League – he was excellent in pre-season and had a great game at Barnsley in the Capital One Cup – his effectiveness and ability to change matches has waned.

If there are psychological impediments at work here for Mirallas, perhaps his enforced three-game layoff with the ban he was handed for that red card against Swansea has afforded him an opportunity for introspection. Before this year, his spells on the sidelines were always injury-related; his energies necessarily focused on getting back to full fitness and then back on the pitch to work his magic once more. Previously a free-scoring attacker in the Greek league and then one the more admired attacking midfielders in England, the Liege-born player is having to face up to a reality where his place in the side is by no means guaranteed.

The good thing for him is that how he responds now that his suspension is lifted is in his own hands. Many Evertonians feel that as a regular source of goals and a creative outlet, his omission from the side has left the team short of potency but chances will come his way in the coming weeks – hopefully in some form against United or Arsenal but more likely against Norwich in the next round of the League Cup – to re-establish his status as a player on whom Martinez can call when the chips are down.

At the age of 28, Mirallas should be at the peak of his powers and his career and with the European Championships on the horizon next summer, this is a crucial period for him to re-find his form, his consistency and his place in both the Everton and Belgium teams. His task at international level is inherently more difficult – opportunities will be limited between now and the Finals in France – but he must grasp those that will come his way on the domestic front and make himself impossible to ignore. He undoubtedly has the talent.


Either no responses have been submitted so far to this article or previous submissions are being assessed for inclusion.

In order to post a response, you need to be logged in as a registered user of the site.