The Bird Is Blue

I wasn't feeling very happy as I edged my car towards the exit of the Stanley Park car park after the Sunderland home game.

Then I spotted something which cheered me up. On the back of the car in front was a Liver Bird, in Royal Blue. Below it was the legend "The Bird is Blue."

I'm guessing this has been discussed on TW in the past, but isn't it time we reclaimed our share of the Liver Bird? The symbol of our city has been hijacked by the Dark Side. Many people, even some Scousers, will think that the bird is the symbol of the RS.

I've got a Liverpool Echo T-shirt commemorating our wonderful 1985 season. There's a blue Liver Bird (in this case used as a symbol of the newspaper) on the front of it and I've never given it a second thought – it looks great.

It's time to end this red monopoly of the city of Liverpool's symbol. Let's start using the image on Everton merchandise. The RS will hate it!

I personally like the idea of reclaiming it, not least because of our historical claim to it as the first club in the city and the fact that our first championship medals had the liver bird on them. 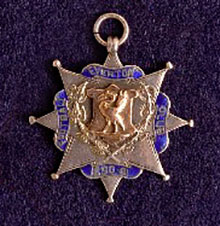 ItÂ’s amazing how many of them really donÂ’t know their history... it is like football for them began in the Shankly years. Even if, as we know, from a league perspective the dawn of Sky seemed to be the end of their era.

Best quip I ever heard at a derby: "Fuck off, we were winning championships at Anfield before you lot even existed". And it shut the mouthy RS up.

Eugene Ruane
6 Posted 19/05/2015 at 05:56:11
I remember many years ago in the pub (The Bank House, corner of Windsor St) my mateÂ’s (very blue) uncle, responding to some crowing red. "The famous Kop!?" he said, bemused. "Before Shankly, you had to walk 50 yards across the kop to get a fucking light!" He also insisted "They used to build bonfires on it to keep themselves warm!"
Patrick Murphy
7 Posted 19/05/2015 at 08:30:08
We represent the City of Liverpool as much as the other lot and for longer and therefore anything that highlights that fact is ok by me, we should be entitled to use the Liverbird in its true blue colours and shouldn’t be ashamed of doing so.

Steve Cotton
8 Posted 19/05/2015 at 08:32:42
I believe that the RS have a copyright on the logo preventing anyone else using it. Not sure if that would stand up in court but knowing them, Yes it probably would.
Peter McHugh
9 Posted 19/05/2015 at 08:40:03
It would be petty, small minded and frankly immature to reclaim the liver birds just to piss off the Redshite. IÂ’m all for it.
David S Shaw
10 Posted 19/05/2015 at 09:03:35
We should also reclaim Fields of Athenry. Everton had a version of that knocking round many years before Liverpool done theirs.
Nick Entwistle
11 Posted 19/05/2015 at 12:16:56
This is the wonderful state of modern football when the best a club such as Everton can do is try to claw back some lost symbolism. If we were picking up even an occasional trophy this would never arise.

Unless things were to change as in my Cojones Grandes piece, then this unfortunately will have to do.

First club with a triple-decker stand donÂ’t you know...

I am told that, some years ago, it seems they tried to take the first steps towards having an orange liver bird [which they have on their red kits] registered as a trade mark. Apparently, for a trade mark, you have to show Â’firstÂ’ use, and Â’exclusiveÂ’ use.

I am told, they received a very stiff letter from solicitors acting for Liverpool CRICKET Club, [established 1807] who also use the orange liver bird on their red & white kit; pointing out that LCC had been using the orange bird for about 50 years longer than LFC! The same argument would presumably, Â’stumpÂ’ EFC. The cricketers are not interested in seeking a trade mark, themselves; but it seems they would be able to stop anyone else doing so.

There has been a deafening silence from Anfield ever since!

I donÂ’t think itÂ’s small minded Nick, I get extremely pissed off where that club has tried (quite successfully) to portray themselves as the "City of Liverpool" Club.

Only one part of this clubÂ’s history but an important one. I wish the club would produce this "Bird" Â– they might at last get a profitable piece of merchandise. Failing that, I hope someone clever, can produce a shirt with "The Bird" on it.

No Terry, there are kno speling misstakes on the Wiki payg

Patrick Murphy
26 Posted 20/05/2015 at 23:15:53
That does look to be the case James and IÂ’ve just read on Seven Streets site that in theory LFC could ask the Echo to remove the bird from their masthead as it breaches the copyright law - perhaps thatÂ’s why they are so enamoured with our neighbours.

I wonder if we could ask Liverpool City Council to create a more Everton friendly emblem which both the city and Everton could use in the future and leave the scavenging bird to where it legally belongs?

I remember now that the gobshites did indeed get copyright on the Liver Bird and one Evertonian lad challenged it but was unsuccessful. I think it was more to do with the emblem being bunged on shirts and being sold that copied the clubÂ’s official partners design.

ItÂ’d be interesting to read the judgement, as that feckin concocted construction of theirs looks nothing like the proper Liver Bird.

IÂ’m still after a silver one anyway and if I can get a blue one... even better. It doesnÂ’t seem to stop the tourist shop bunging the Liver bird on some of their saleable gear

David 10, it was the fields of Goodson, with Kendall, Harvey and Ball, and Dixie Dean, the greatest of them all!

Told me he had been singing it for years and those horrible red cunts heard him singing it in Ned Kelly and thatÂ’s how it ended up on the kop.

Those phoney bastards have no shame after all. What did the banner say when we last played them at Wembley. LIVERPOOL FC OUTRAGED AT EVERYTHING, BUT ASHAMED OF NOTHING!!

I did hear ours personally late 80sish but I didn't learn it, it had two verses, I'm fairly certain it started 'By a lonely Bridewell Wall, I heard a young blue calling, Father they are taking you away.....', I don't know any of the rest of that verse or the second. The chorus is a bit more well known '....Where once we won nine Championships, We played it on the Wing we had the likes of Andy King....', so I'm guessing and hoping that's the version you heard and so your bit fits into one of those verses?

It's worth mentioning that that wasn't the first Everton version of it, there was another one that predates it and is based on the Rangers Athenry, so it crossed my if the bit you knew was from that version instead.

Incidentally the RS have just changed their badge What happened to the Shankly gates? These wonderful gates named after a man that was effectively banned from Anfield for the last few years of his life who was to be found at Goodison Park every Matchday.