Mina charged by FA for appearing in betting advert 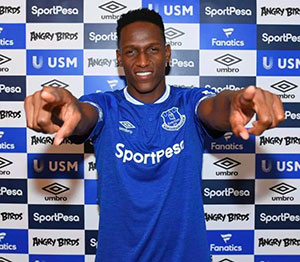 Yerry Mina has been charged with misconduct by the Football Association for an alleged breach of betting regulations, the Everton defender having appeared in an advert for a gambling company.

It is understood the charge relates to an advert in which Mina appeared in for Betjuego in his home country of Colombia earlier this year. Stringent rules are in place with regard to sports betting in order to prevent, among other things, match-fixing and spot-betting.

The relevant section from the 2018-19 FA Handbook states: "An individual participant, when acting in a personal capacity, shall not be permitted to advertise or promote any betting activity that the participant is prohibited from engaging in by Rule E8(1) or E8(2)."

Mina's case will be heard by an independent regulatory commission, that is expected to be a three-person body. The potential sanction faced by the 24-year-old is down to the commission's discretion, with one factor being how Mina decides to plead. The Columbia centre-back has 48 hours to answer the charge, the deadline being 6pm on Friday.

“Yerry Mina has been charged with misconduct in relation to The FA's betting rules. It is alleged the defender breached FA Rule E8 (3) by participating in an advertisement for betting activity which he is prohibited from engaging in,” read an FA statement.

The charge comes a week after Daniel Sturridge was fined £75,000 and given a six-week suspension, of which four are suspended, after being found guilty of breaching betting regulations. The FA is appealing the independent regulatory commission ruling on the basis that, in their opinion, the ban should be at least six months.

Everton signed Mina from Barcelona last August for £28m after he had scored three goals at the World Cup, one of which came in Colombia's last-16 match with England. He endured an injury-hit debut season at Goodison Park and will be hoping for more game time, especially if, as expected, Everton are unable to turn Kurt Zouma's loan move from Chelsea into a permanent deal.

Can it get any worse right now?

He's been charged with appearing in what you lot call an "advert" for a betting company.

Chris Gould
3 Posted 24/07/2019 at 17:20:28
Yes, Mike, and the rule is ridiculous. How can half the Premier League teams be allowed to play in front of millions of tv viewers advertising betting companies on their shirts. Yet a player can't appear in a TV advert for a betting company? They are all walking advertisements for betting companies everytime they wear the shirt.

It makes no sense.

Mike Gaynes
4 Posted 24/07/2019 at 17:30:44
Ah, yes, Chris, but the betting companies on team shirts have paid millions for the privilege. Therefore they are clean, moral and highly respectable.

It's all about the pesos.

And I thought they were money grabbers with no morals. ðŸ˜œ

Alan J Thompson
6 Posted 29/07/2019 at 07:07:39
Is it known what submission Mina (and, I presume, Everton) made in what seems to be mitigation only. I suppose any contract with a football club includes obeying FA Rules regardless of image rights and the country in which the advert was used.

Does anyone know the details of Sturridge's breach of regulations and how his and Mina's vary from Spurs allegedly using Kane's image on a poster in Africa promoting a Bookmaker and if it all depends on the use of the words individual and personal in the rule? That is, if Everton or his Agent's company say it was done on their behalf, that there is no charge to answer.