Everton were stunned in the 21st minute when a simple cross allowed Aritz Aduriz to get forward and his feeble attempt bobbled past Howard into the Everton net.  A free kick on the Everton right led to a great ball in that Aduriz almost connected with as Everton looked to apply some pressure of their own.

On the half-hour a great break was initiated by a Cahill challenge and the Aussie loped a nice ball forward to Johnson who dodged inside the defender and floated a beautiful shot in that was denied only by the crossbar.  Great effort!

A fantastic free-kick centrally from ______ was curled around the wall and force Howard to save brilliantly to his right.

Cahill cased a kafuffle with a typically stupid arms-up challenge in the Everton area that had everyone up in arms.  Totally unnecessary... fortunately Mike Riley viewed it as unintentional.  Arteta had a chance at the other end from a free kick, but it was weak and came off the wall.

Johnson got on to a Bettie flick from a lofted Neville hoof and got a brief sight of goal but A got a hand to it.  Then, off a Yobo flick, Johnson's shot beat the goalie but was cleared off the line.

Beattie earned himself a silly yellow card for an awful late challenge after he was dispossessed and well beaten by Ustaritz who appeared to perhaps handle the ball in the area.  Good work from Beattie just before the break led to a great cross by Arteta that was headed over by Osman but he got a corner.

After the break, a few changes to both sides, and no real pattern to the Everton play.

The final pre-season friendly of 2006 is a testimonial for Goodison legend, Howard Kendall, against Athletic Bilbao, the team for which he left Everton in 1987 after winning the Division One title for the second time in three seasons.

Kendall left the Blues in search of a European challenge in the wake of the ban on English clubs following the Heysel disaster. In the words of HK himself, that ban "set Everton back 20 years" and on the eve of the 2006/07 season, current manager David Moyes is bidding to steer the club back to Europe following a disappointing 11th-place finish in May. 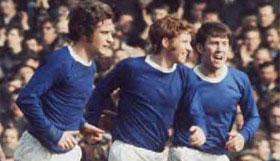 Moyes is quoted as saying that the line-up he fields against Bilbao will have no bearing on his starting XI versus Watford next weekend but that is presumably to dampen the anticipation surrounding Victor Anichebe.

Those quotes run contrary to the message from Assistant Manager, Alan Irvine, on evertonTV in Texas when he said that by the time the Bilbao friendly rolled around, the team fielded would be very close to that which would begin the season in earnest on 19th August.

The truth probably lies somewhere in between. Moyes will no doubt favour the core players likely to start against Watford. That means a likely starting striking duo of Beattie and Johnson, midfield berths for Arteta and Cahill, and perhaps Yobo and Lescott in defence.

While a big attendance is the goal, testimonial matches are notoriously under-attended, even for legends like Kendall. And live streaming on evertonTV could further affect numbers showing up on the day.