Buouyed by a successful if less thrilling trip to Anfield last weekend, Everton return to Goodison for their first home fixture in almost a month. The visitors are Blackburn Rovers who unceremoniously dumped the Blues out of the FA Cup, scoring four goals in the process.

The chief architect of that 4-1 demolition was two-goal hero, Morten Gamst Pedersen, so it's no surprise that one of the biggest stories ahead of this weekend's rematch is the fact that the Norwegian is ruled out with a hamstring strain picked up on international duty this week. 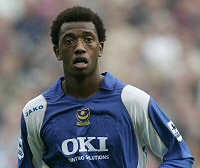 Manuel Fernandes: In line for his debut after sitting out the derby

That will no doubt make Manuel Fernandes' debut for Everton a little easier. The Portuguese midfielder, who scored for Portgual's U-21s in midweek, is in line for his first appearance since signing on loan from Benfica before the transfer deadline.

Noted as more of a defensive midfielder, though, it's not clear where he'll play. Lee Carsley has made the role in front of the back four his own this season and Phil Neville played in central midfield against Liverpool. With Leon Osman suspended, Fernandes may be asked to play a more advanced role that might allow Tim Cahill to support Andy Johnson in attack.

Certainly, it wouldn't be surprising if David Moyes persisted with the 4-5-1 formation despite its overtly defensive emphasis, and AJ is expected to be fit to play up front after pulling out of the England squad for Wednesday's defeat to Spain.

No word yet on the availability of Nuno Valente who was injured for the derby; if he isn't fit for this weekend's game, Joleon Lescott will continue to deputise at left back and Alan Stubbs will partner Joseph Yobo again. In that case, Osman for Fernandes would be the only change from the XI that started at Anfield.

Rovers are a place and two points behind the Blues in the table but Everton have a game in hand, an advantage that will be even more important if they can earn three points this weekend. That's because they have also played a game fewer than Portsmouth, Reading and Bolton; the latter are currently eight points better off.