After a very Good Friday, Everton fans are enjoying a very unfamiliar prospect this season, that of a David Moyes team picking up momentum going into the final month of the campaign rather than stumbling their way over the finish line.

Despite losing Tim Cahill for the remainder of the season at the beginning of March and being without Manuel Fernandes for the last two outings, the Blues remain on course for Uefa Cup quailfication... even with games against the top two looming in the final six fixtures.

With Portsmouth, Tottenham still pushing hard from below and Bolton three points above, this Monday's trip to The Reebok has taken on massive importance. Win, and David Moyes's men will really be in with a big chance of finishing a fantastic fifth (there's a Season Review DVD title waiting to be written!), but a point would be enough to keep the Trotters in reach and Spurs needing to win when they play their catch-up game just to draw level.

Fernandes was given an outside chance of playing against Fulham on Friday and didn't make it but the extra two days could make the difference for the Portuguese midfielder as he recovers from a thigh strain.

If not, Phil Neville and Lee Carsley will resume their partnership in central midfield, with Leon Osman and Mikel Arteta on the flanks. 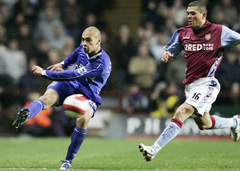 James Vaughan: on a roll

Goal hero, James Vaughan, will almost certainly make a fourth-successive start, especially after Victor Anichebe hobbled off at the end of Friday's game, and there is no incentive to mess with the back four as Stubbs's experience and physical prowess will be needed.

If there are to be any changes it will be on the bench where the manager could add Andy van der Meyde after the Dutchman apologised for critical comments published in a national daily recently.

After faltering briefly with three consecutive defeats — two of them by 4-1 margins — Bolton seem to be back in their stride having won their last two, albeit against Sheffield United and Wigan, two clubs struggling at the wrong end of the table.

And Sam Allardyce's team are never easy to play against, especially now that they have added the pace and finishing of Nicolas Anelka to their pre-existing size and brawn. Indeed, it took a moment of pure magic from Mikel Arteta to decide the contest between these two sides at Goodison Park back in November.