Following his night to forget against Tottenham 10 days ago, David Moyes suggested that his team might benefit from two successive games away from Goodison Park. The emphatic result at Watford last weekend would seem have vindicated that belief and the trip to Sheffield United offers the opportunity to make it two League wins on the bounce, something Everton haven't managed since the third and fourth fixtures of the campaign.

A win for Moyes's boys would also represent their second-successive "double" for 2006/07 — the first, of course, was completed against Watford.

Barring any training-ground midhaps, the manager could well be able to field an unchanged line-up at Bramall Lane if he so chooses.

That would give the mis-firing James Beattie yet another chance to get off the mark from open play this season and start showing signs that a partnership with Andy Johnson could work. 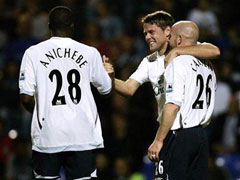 James Beattie: likely to get another chance alongside AJ this weekend

Nuno Valente, Andy van der Meyde, James McFadden and Alan Stubbs are all still out injured and won't be in contention if Moyes does decide to mix it up. And Victor Anichebe reached five bookings for the season in the defeat by Spurs but didn't appear to have served a ban last weekend. Presumably, he is suspended this weekend.

Sheffield United face Everton hoping to make amends for a thrashing at the hands of Liverpool at Anfield last week.

The Blues, however, will have their eyes on sixth spot as Reading must visit The Emirates Stadium looking to atone for a 4-0 reverse of their own to Arsenal at the Madejski earlier this season.

Despite all the criticism of Moyes's tactics and general modus operandi, sitting 6th with 10 games left would leave the Blues well place heading down the home straight.

The last match between the sides saw the Sheffield United manager Neil Warnock moaning about the manner in which Andy Johnson won his penalty, as well as seeing Everton walk away from Goodison Park with all 3 points following a 2:0 win courtesy of goals from Mikel Arteta and James Beattie.  In fact Beattie’s goal was the last time he scored for Everton – can he score again?

The last match between the sides at Bramall Lane was in December 1993, when the sides drew 0:0 during the second Jimmy Gabriel caretaker period, following Howard Kendall’s resignation the previous week.

Despite leading the overall series, Everton’s record at Bramall Lane is not exactly awe-inspiring:

Everton’s record for 3 March sees them as potential underdogs for the day, although it is pleasing to note that the team have yet to be beaten on this day in the Premier League:

The last match on this day was a 0:0 draw at home to Leeds United in 2002.  However, one statistic that does stand out is that of the 8 matches played away from home on this day, Everton have drawn 1 and lost 7 of them, scoring 5 goals and conceding 17 in the process!