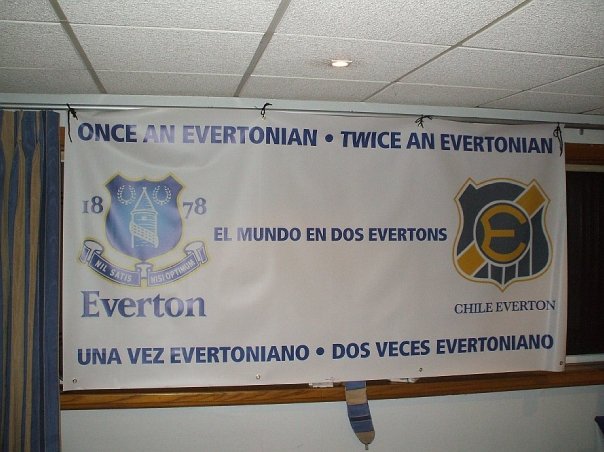 THE future success of the two Evertons was toasted when the Shareholders Association held their annual dinner at Goodison Park recently.

The theme of this year's dinner was the centenary of the Everton in Chile, which was formed in 1909 a few weeks after Everton had sailed from Britain to South America with Tottenham Hotspur to play a series of exhibition games.

Guest of honour was Ray Wilson, the only Everton player to have played at both Everton grounds. Ray was not only England's left-back in the 1966 World Cup finals, but also in the 1962 tournament which was held in Chile.

The 1962 quarter-final played at Everton was between England and Brazil who had the player of the tournament in Garrincha. Ray Wilson signed a framed photograph of himself tackling the legendary Brazilian and this was one of a number of items auctioned during the evening.

Around £2,000 was raised which will be shared between the Everton Former Players Foundation and a special needs school in Viña del Mar.

Also in attendance was club chairman Bill Kenwright, who wished our Chilean cousins every success as they represent their country in the Copa Libertadores, the cup competition for the top clubs of South America. Other guests included Dave Hickson, Honorary President of the Ruleteros Society which was set up in 2002 to help forge links between supporters of the two Evertons. He was joined by Derek Mountfield, Gordon West, the Lord Mayor of Liverpool ? Councillor Steve Rotheram, and City Council leader Warren Bradley.

The Shareholders Association were delighted to welcome more than 20 guests from the Liverpool office of the Chilean shipping line CSAV.

The meal had a distinct Chilean flavour, having been prepared with the assistance of Julio Arellano, proprietor of the Valparaiso Restaurant in Liverpool city centre and Chilean vice-consul to the city. Dave Hickson presented him with a gift to pass on to the Chilean Everton.

After the dinner, there were two videotaped messages screened from Antonio Bloise, president of the Chilean Everton, and Juan Foxley, nephew of one of the founders in 1909, which were warmly received:

Tony Heslop, vice-chairman of the Everton Shareholders Association and president of the Ruleteros Society, said: "It was a great, heart-warming evening which helped to further cement the unique friendship between the two Evertons and their supporters."

Great stuff. Many thanks, Mike Owen and Tony Heslop for that update.

While on YouTube, I spotted this Centenary feature from Sky Sports (broadcast last July) that I was not aware of, featuring John Shearon and providing an excellent synopsis of the historical connection:

Great post Mike. I never realised until now that the the Chilean Everton should have hosted the Chile - Brazil semi-final in '62 and were shafted the same way we were in '66. I bought a ticket for what should have been the England semi and it still pisses me off to this day the way they changed the venue after the quarters. Maybe I should get over it.
Gerry Quinn
3   Posted 28/03/2009 at 17:51:15

This link with another Everton is something so extraordinary, I can?t wait to see if they do play each other ? what a fantastic advertisement for both clubs ? and I am sure it will become worldwide news because of it?s novelty.... let?s hope our club make the most of the potential publicity.

Won?t see the blues in the US this year, so will be monitoring the summer "friendly" situation closely and will make every effort to arrange a "holiday" to Chile should it come about... fingers crossed.

Bob, sympathise with you regarding "that" semi-final, it still gets my goat as I watched the 3 Goodison and 3 OT matches in that group, along with the North Korea match ? Portugal were by far the best international side I have ever seen. If they hadn?t of switched that match, I have no doubt in my mind that Portugal would have gone on to win the World Cup.
David Moorcroft
4   Posted 28/03/2009 at 21:43:20

In the 1962 finals, Chile were apparently surprise semi-finalists. And Everton?s Sausalito only had a capacity of something like 17,000 as did two of the three other stadiums being used, while the national stadium in Santiago had 66,000, so PERHAPS some argument there for shifting the game.

But I remember as a 9-year-old being deeply affronted that 65,000 Goodison was being jettisoned so England could play at Wembley. Interesting how it was thought a Wembley crowd would be more supportive, or was it that the suits of the day couldn?t be arsed getting the British Rail Pullman north?

Interesting suggestion that Portugal would have beaten England if the semi had not been at Wembley. Good quiz question these days, I think: Who were the losing semi-finalists at Goodison in the 1966 World Cup? Supposedly a boring game, according to what I have read.

Hope you like the bi-lingual banner, which may be on show at Wembley.

With the language, geography and history issues, I reckon the two Evertons should be part of the National Curriculum.
Derek Thomas
7   Posted 30/03/2009 at 06:49:03

Ans. Russia. I was there and it was a typical dour we don’t want to lose semi-final, as these often are to a neutral.

I think the score was 2-1 or 2-0 and the ground seemed half empty. Though for some reason there were a lot of squadies from BAOR, like me and many others who bought tickets on the strength of the posted draw...nothing changes.

The only Russian I knew was the legendary Lev Yashin who made a couple of good saves.

The England game not withstanding, the ticket prices for the Gwladys St was still good value, ( 7 shillings and 6 pence per game Vs 3 shillings for a league game) given the quality of the prelims and quarters. Even if Bulgaria did come to kick lumps off the Brazilians.

Mike,
I understood that the police, etc., wanted it switched for "security" reasons - yeah, right!

I was at the do after the Stoke game and it really was a great night. Derek Mountfield did a good job on the night as compere even though with the dodgy mike he sounded more like Norman Collier, the food was great so a visit to the Valparaiso is on the cards soon.

One of our friends is or should I say WAS a red but the history and company she was in I think has changed her (she was even draped around Dixie on the way home). Gordon West is off his rocker and Ray Wilson and Dave Hickson were gents. So come on Everton ? get something sorted out with our cousins from across the water for their centenary. COYB

Mike, Tony,
Realistically, what’s your honest "gut-feeling" concerning the chances of Everton visiting Chile for this centenary match? I know it would be a helluva long travel for the squad - especially with the shortish pre-season. Do I presume it won’t be this year?
And thanks for the updates on the Everton Dos - fascinating and exciting.
John Shearon
11   Posted 31/03/2009 at 10:03:22

Gerry, There will be no game in Chile this year (at least not the first team) although this is something that the Club have said is a possibility in the future. What is possible is a game at Goodison in August. The Chilean directors met with Robert Elstone at Goodison recently and, pending David Moyes approval and availble date, a game between the two clubs was agreed. Unfortunately, our success has put this game in doubt - Community Shield and Europa Cup commitments could take away the availble match slots. Hopefully, the Chileans will be flexible enough to fit in with our calendar.
Gerry Quinn
12   Posted 31/03/2009 at 11:51:29

Never knew of the history between the 2 clubs. Very interesting to hear of it.

Would love to see both teams play, see if any young chileans we could tempt over haha.

Yet another fantastic example of what makes Everton more than just a football team. An institution with a history and a spirit rarely found elsewhere.

What a superb story ? a Club started by 15 year old kids, two of whom still gave their lives for Britain in the Great War, and maintained a corner of Merseyside on the far side of the world. It knocks today?s Sky et al circus into a cocked hat!