Everton kick off both 2010 and their FA Cup campaign with a home tie against League One side Carlisle United in the Third Round, but David Moyes begins the new year with something of a headache when it comes to strikers.

Yakubu left for the Africa Cup of Nations this week, Louis Saha is again ruled out with a hamstring strain, Victor Anichebe is still recovering from a long-term knee ligament injury, and the Club have now suspended Jô indefinitely after he took a trip back to Brazil for Christmas without permission.

That leaves the manager with just James Vaughan, who has barely played a quarter of an hour since returning from his own long lay-off, as the only fit recognised striker, although Tim Cahill is expected to be fit despite limping out of Monday's win over Burnley.

The Australian could be deployed as a striker if Vaughan is not ready to start and Moyes would probably be comfortable with that against lower-league opposition, and Landon Donovan arrives at the club this weekend with his first involvement likely to be in next weekend's match at Arsenal.

Joseph Yobo has also joined up with Nigeria for their pre-AfCoN preparations despite a hamstring injury but Sylvain Distin is still out with the same problem, meaning another outing for the John Heitinga-Lucas Neill partnership in central defence.

As far as other changes go, Moyes doesn't have an awful lot of options, though he may choose to give more playing time to one of his up-and-coming players like Seamus Coleman or Jose Baxter. 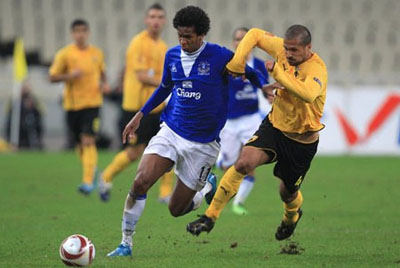 Jo: suspended indefinitely by the club

Moyes will know from prior humiliation in the Cup that nothing can be taken for granted in this competition but this should be a routine game against a team 48 rungs below the Blues on the English league ladder.