Young Blues can have their say 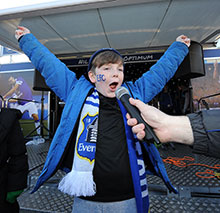 Young Evertonians can apply to join the Junior Fans' Forum from today.

The Forum was launched last season to give junior Blues the chance to share their views and get involved in key decisions that are likely to affect them.

The enthusiastic group made a real impact during their 12-month tenure with one of their biggest successes arriving in January 2013 when they helped the Club to bring Junior Fans Day to life at the home fixture against Norwich - a matchday dedicated to the youngest generation of Blues.

It was the inspiration of the Junior Fans' Forum to bring a mini-matchday team to Goodison Park to give them a unique behind-the-scenes insight and the inventive youngsters also designed the special-edition junior programme which was given out free of charge on the day.

The young fans also gave their input into the crest consultation, interviewed the Club's deputy Chief Executive Officer Denise Barrett-Baxendale, and put forward their ideas for the brand new evertonfc.com which will be live in August.

They also helped to arrange the Junior Blues Sports Day at Finch Farm, took up a mystery shopping experience at the Club stores and got the chance to put their questions to manager Roberto Martinez.

In addition to giving young fans the opportunity to get involved, the Junior Fans' Forum provides a valuable opportunity for the Club to gain feedback from an ever-increasing section of the fanbase.

In the last three years there has been a massive 71 per cent increase in the number of junior Season Ticket holders at Goodison Park.

As part of its continued commitment to fan engagement, the Club is in constant dialogue with supporters and the junior initiative is an extension of the adult Fans' Forum, who meet monthly with Club officials.

The group of youngsters, who must be between the ages of 11 and 17, will get together during the school holidays to discuss a range of topics from making matchdays at Goodison more memorable to coming up with exciting event ideas and much, much more.

If you want to have your say, simply complete the application form on evertonfc.com, telling the Club in no more than 100 words why you would make a suitable candidate for the Junior Forum.

Forms must be submitted by 5pm on Monday 4 August. New members will be notified by the end of August.


Derek Knox
1 Posted 15/07/2014 at 18:49:26
Think it's a good idea to get the next generation of fans involved, like with the playing side of things, can only be beneficial, to both the youngsters, and the site to get them involved!

I do hope though, that there will not be any Anglo Saxon expletives, or indeed any other ' new-swear ' that us older members could be shocked by !

Ah ! My tongue has cramped in my cheek !

Rob Halligan
2 Posted 15/07/2014 at 19:04:29
Have to be between the ages 11-17 Derek. No chance anybody on here being able to apply. To be fair though to keep the younger generation of fans we need to keep our younger players, the Barkleys, Stone's etc who younger fans will look up to.