McCarthy may have hamstring injury 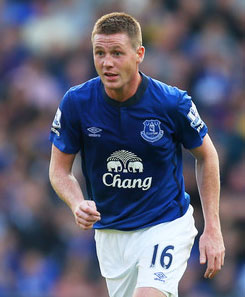 The Republic of Ireland's medical staff will assess the condition of James McCarthy's hamstring before deciding whether or not to include him in the upcoming internationals against Scotland and the USA.

McCarthy pulled up late in Everton's 1-1 draw at Sunderland yesterday clutching his upper leg and finished the match with strapping on the area as Roberto Martinez had used all three of his available substitutes.

The 23 year-old, who missed both of his country's Euro2106 qualifiers last month with a similar injury, will undergo an assessment when he joins up with the rest of Martin O'Neill's squad in Dublin this evening.

Ireland, currently joint top of their group with Poland, face Scotland in Euo2016 qualifying on Friday and then have an international friendly with the United States scheduled for the following week.

McCarthy's Everton teammates, Seamus Coleman, Darron Gibson and Aiden McGeady have all been named in the squad. Should Coleman play, it will be his first involvement for his country since the summer due to a succession of injuries that have dogged him so far this season.

Everton should insist that he stays at Finch Farm seeing as he's already missed games this season with a similar / the same injury.

I have a feeling Naismith will put one over us, from what I have seen of the Scots, they look a better side than the Republic.

Tony Abrahams
17 Posted 11/11/2014 at 07:27:17
Robert he's a Glasgow kid who elected to play for the Republic and the game is getting played at Celtic Park. If McCarthy misses this match, the kid would be absolutely devastated and maybe the great form he has been in recently is partly due to his excitement in looking forward to playing in this game?

Big fixture this one and although the match is being played in Scotland, I'm intrigued to see which country will have the most support inside the stadium, given Celtic's massive links to the Republic.

Imagine how desperate any 23-year-old kid would be to play in this game.

James McCarthy goes away with Ireland, which he has, despite carrying a obvious muscle problem, he then plays during a grueling match against Scotland and aggravates the injury so that he misses at least a month of football at Everton?.
A month of vital football at the place of his employers?

It is absolute madness that he has been allowed to go away this time, even more so with Gareth Barry likely to miss a sizeable chunk of action.

What are we playing at?

Why didn't we simply say that he's not fit for action next week, we already have a slight concern over Seamus Coleman too, another who will probably play Scotland despite not being 100 percent right.

I will enjoy the International matches don't get me wrong, watching the Ireland v Scotland game and the Scotland v England one but I damn wish they didn't have to keep stopping and starting the club football to fit them in.

Managers moan constantly about winter breaks and too much football at Christmas time and December yet these International matches are arranged at the beginning of the so-called busiest period of the calendar.

Expect him back on Merseyside before the weekend. Although EFC should have informed the ROI medical team the lad was injured.

Did someone at Goodison go around breaking a load of mirrors? I can't remember a season where nearly all the players have at some time been out for several weeks/months. I've already written this season off but hope we win a cup

The season has been totally destroyed by long term injuries to key players, Barkley, Mirallas, Coleman still doesn't look fully himself, Stones gone until January at least now Barry and McCarthy get them just to add to it.

I know people will point out that Gibson is a decent stop gap but let's ask ourselves how long will it be before he's back down and out with another knee/hamstring/thigh problem?

We are not going to challenge the top 4 even though the league is wide open, that's not necessarily because there's that many great sides it's because we just aren't that good this year couple with the horrible injury record its not going to happen.

Prior to the season there were high hopes, we had a young hungry Ross Barkley, we were made up we had just signed Lukaku, even at 28 million there was still a bit of excited anticipation there.

Too much has gone wrong since those hit summer days though.

Barkley crocked on the eve of the opening day, then one of our most potent attackers Kevin Mirallas, John Stones our young composed central defender with a injury that left me totally downbeat.?

Couple these factors with Romelu Lukaku's total inability to look like he's even got out of pre-season mode, his form is nothing like I expected when we signed him, he's been a disappointment thus far.

Then we all thought the likes of Arouna Kone would be back by now adding some more depth and a different option.

The signing of Atsu another let down and hasn't even had the impact that the Deulofeu cameo's had this time last year.

Intact I'm really struggling to find that many real bright sparks yet as we approach winter, perhaps the ever consistent James McCarthy and the form of Steven Naismith.

Above that there really hasn't been anything to crow about.

We have in Lukaku a young player who will score a lot of goals for our club.

We have a very good defence with Jags and Disitin that others do not have.

I like your thinking but I'm still having nightmares about the Jags/Distin partnership from early season, I know they've done ok the last two but they are set to face more potent attacks than Lille and Sunderland.

I will be honest I was quite pleased when I knew he was signing permanently but I do also know when to admit when I'm wrong.

Robert Duncombe
26 Posted 11/11/2014 at 20:39:31
Thanks for the info, Tony. My comment was a nod in the direction to those who cannot be named across the Park. Saying that, I want him to be fit for us. I can however from your comments see how he will be torn.
Tony Abrahams
27 Posted 11/11/2014 at 22:25:29
Sorry I missed your subtle dig, Robert, but I was just thinking about how badly McCarthy must want to play in this fixture.

CanÂ’t play if your injured though and at least he wonÂ’t be suffering from Sterling Syndrome when he returns!

Max Wilson
28 Posted 12/11/2014 at 16:47:25
You know,all this rumour and supposition about McCarthy, without a doubt our best player this season, is doing my head in. Surely as soon as he came off the pitch on Sunday complaining of a problem, the physio would have pounced and if there appeared to be a problem immediately arranged for the guy to see the club medic, who should have been along in case of emergencies?

So why, if he passed through these checks okay, are folk now going on about him being injured? What is going on really? If he has had a bad knock he should be resting up and/or being assessed. Let's have a definitive answer.

Rob Halligan
31 Posted 13/11/2014 at 18:45:56
Good news, if we can call it that, is that McCarthy will not be risked in either of ROI's two games this week, so hopefully will return to Finch Farm for intensive treatment and get him ready for the next few important games for us.