Naismith an early doubt for Sunday 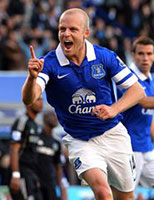 Roberto Martinez says that Steven Naismith has a 50-50 chance of being fit for Sunday's trip to Tottenham after being left out of the squad for Wolfsburg because of a hamstring injury.

The Scot is the latest Everton player to be sidelined by a soft-tissue complaint after over-stretching his hamstring in the closing stages of the 2-1 win over West Ham last weekend.

Naismith remained on Merseyside along with Steven Pienaar, Gareth Barry and Leighton Baines while the rest of the squad flew out to Germany today but his manager told the media today that all four players "have a chance" of being fit to face Spurs.

There was better news for Arouna Kone, however, who was named in the squad for tomorrow's Europa League clash with Wolfsburg after coming through the first half of last evening's U21s draw with Celtic.

The Ivorian has been making slow progress on his return from a year out with a knee injury but Martinez is pleased with the way his fitness has progressed in recent weeks. Kone was due to play a part in the League Cup tie at Swansea in September but felt pain in his knee during the warm-up and was withdrawn from consideration for that match.

We need him if he is not being sold or replaced in January that is.


Everton need a big defensive performance as it appears Romelu may be given the lone raider role up front and another excellent showing from Osman could be significant.


Good to see Kone fit again and he may get 10 minutes at the end if needed but otherwise wonÂ’t be thrown in yet.


Whatever happens tomorrow Everton should progress after playing Krasnodar in the final game.

I have never known a season quite like this for injuries, it's just one after another Â– you're half expecting another tomorrow night. Every game your keeping your fingers crossed, it's becoming a joke.