Kone set to start against Krasnodar 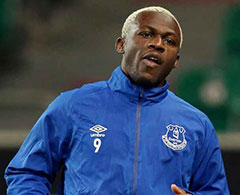 The 31 year-old had to undergo surgery to repair the meniscus in his knee in November last year and has been out of the first-team picture ever since during what has been an unexpectedly long recovery.

Following months of patient work in the gym at Finch Farm and a facility in Belgium, he was due to play a part in the League Cup tie at Swansea in September but that comeback was aborted when he felt pain in the knee.

Now, having come through his latest test in the U21s' 3-2 win over Sunderland last Monday, he will make his first appearance for the senior team in the Group H dead rubber against the Russian side according to manager Roberto Martinez.

With the Blues and Wolfsburg having already sealed qualification to the knockout phase, Thursday's match is meaningless and, in addition to the Ivorian, Martinez is expected to take the opportunity to field some of his lesser-used players.

Bryan Oviedo is another candidate to feature after playing and scoring alongside Kone for the U21s, while the likes of Joel Robles, Luke Garbutt and Tyias Browning will also be hoping for game time.


Gavin Johnson
1 Posted 05/12/2014 at 23:07:47
I hope Kone takes his chance and will be on the subs bench in the league this side of Xmas. Cos it's looking like we need all the help we can get, going on the last couple of performances.
Trevor Lynes
2 Posted 06/12/2014 at 12:14:52
I would like to see both Oviedo and Kone on the bench for this evening's game. Surely if Alcaraz is a consideration for this match then those two should each be considered. They have had run outs for the Under-21s and both came through well whereas Alcaraz has not played since his injury.
Sam Hoare
4 Posted 07/12/2014 at 15:07:51
What does everyone think of this team for Krasnodar (assuming they are all fit):

Perhaps Kenny may not be the best right-back; I think Gethin Jones has been playing there for U21s.

An interesting team I think. With some pace and power spread around.

I would also like McAleny to be given a run-about at some point. At the same time, Martinez will be conscious of giving the competition and the opposition some respect, so I doubt that we will see Kenny and Ledson as starters.

At the moment, I think Browning looks more like a right-back than a centre-back; he looked very shaky recently against Sunderland's U21s Â– not anywhere near the same player we saw playing against the Redshite. I think he might mature into a centre-back eventually... but doesn't look ready, currently.

I would like to see Galloway start alongside Alcaraz; it will be good fitness rehabilitation for Alcaraz and he can use his experience to guide Galloway through the game, like he did with Stones last season.

This would also be the perfect opportunity for McAleny to get some game time; I would play him alongside Kone:

I would like to see Robles, Hibbert, Garbutt, Alcaraz and Jagielka as the back four; Besic and Oviedo forming the defensive midfield; McGeady, Barkley, Kone, and Atsu up front; with Howard, Coleman, Galloway, Osman, Pienaar, Lukaku and McAleny on the bench.

Dominic Tonge
10 Posted 08/12/2014 at 00:20:30
He might well be 'like a new signing'; but what we need to bear in mind is that, if Roberto were to announce that we had an actual new signing Â– BUT our new signing had not featured for a year because of an exploded knee and was over 29 Â– then really we would not be overly happy.
Michael Penley
11 Posted 08/12/2014 at 00:40:00
Robles must play Â– time to put him to the test. If he makes no mistakes then I'd start him in the Premier League over Howard, at least until he messes up again. We've got to have competition for every position.
Paul Ferry
12 Posted 08/12/2014 at 01:19:05
Agree 101 per cent with Mike (#12) about Robles/Howard. I would love to see someone knock Howard off his perch. It would be very good for this club. The issue is that Martinez has inexplicably failed to address the keeper question and it is costing us dearly.

The red/blue-birds fella would be a lovely New Year gift.

Bobby seemingly does not do flexibility and I have a hunch that we might see more Â’seniorÂ’ players than we might think. He has shown a somewhat surprising cautious streak this season that I for one did not expect.

Mark Frere picks Barry! I wouldnÂ’t be sad if he never played for us again. Luckily he is banned for the QPR game but if Bobby had true balls he would drop Barry and Baines for the RÂ’s game and, if Robies does well v the Ruskkis, he should start against HarryÂ’s boys.

None of these three things will happen, I suspect!

Ciaran Duff
13 Posted 08/12/2014 at 03:40:15
Correct me if I'm wrong here, Lyndon, but I don't think that Wolfsburg have already sealed qualification. I believe that if Lille beat them then they will be level on points and go through on head to head?

Anyway, I think that we should be giving our fringe players a go without upsetting team structure too much. If we throw in too many new players (aka the "Moyes League Cup selection option") then the team is disjointed and it is not a fair reflection on the new players.
So, my preference would be:-
Robles
Browning Hibbert Alcaraz Garbutt
Besic Oviedo
Astu Barkley McGeady
Kone
Subs: Howard, Osman, Pienaar, Jagielka, McAleny, Ledson, Eto'o.

Tim Greeley
16 Posted 09/12/2014 at 12:04:03
Whoever has Barry in on Thursday actually makes sense for just the reason that he is banned vs QPR. At the moment, we are tight in central midfield so he should play and hopefully regain some form. IÂ’d venture his poor form cost us 2-4 points the past week... contributed to it certainly.

If we donÂ’t see Robles on Thursday, then weÂ’d better loan him out in January and begin the process of scouting our new Â’keeper in earnest. John Ruddy? Michel Vorm? Both were hot shit for awhile.

And PLEASE let Kone get through unscathed.