Following 'Mirallas-gate' on Monday, www.oulala.com have taken a closer look to who the five best ever Premier League penalty takers are.

It's no surprise that Kevin Mirallas failed to make the cut... however his team-mate did sneak in!

Ex-Southampton star Matt Le Tissier leads the way in terms of conversion-rate based on a minimum 10 spot-kicks taken.

Nicknamed 'Le God' by his adoring Saints fans, Le Tissier found the back of the net with an incredible 25 of the 26 penalties he took during 10 seasons in the Premier League with the Saints. An outstanding 96.2% success-rate from the spot. Considered as one of the greatest ever from 12 yards his overall record is 47 goals from 48 penalties.

Danny Murphy enjoyed Premier League spells at Liverpool, Charlton, Tottenham and Fulham during his professional career converting 18 of his 19 EPL penalties at a more than modest rate of 94.7%, just enough to take second spot.

In third comes ex-Toffee James Beattie. The striker spent much of his career in the Premier League which included time at four other clubs, Blackburn, Southampton, Stoke City and Blackpool. With success from 16 of the 17 Premier League penalties he took gave him a conversion-rate of 94.1%.

Defender Julian Dicks spent the majority of his career at West Ham United, with a short stint at Liverpool, comes in fourth alongside the only current Premier League player in the top 5, our very own left-back Leighton Baines, both sharing the same record. The pair have converted 15 of the 16 penalties they have taken, a rate of 93.8%.

Of the chasing pack two current players have 100% records from the spot, however have taken less than 10 penalties. Chelsea's Eden Hazard has converted all 8 of the penalties that he has stepped up to in the Premier League while Manchester City midfielder Yaya Toure has converted all 7 of his spot-kicks. 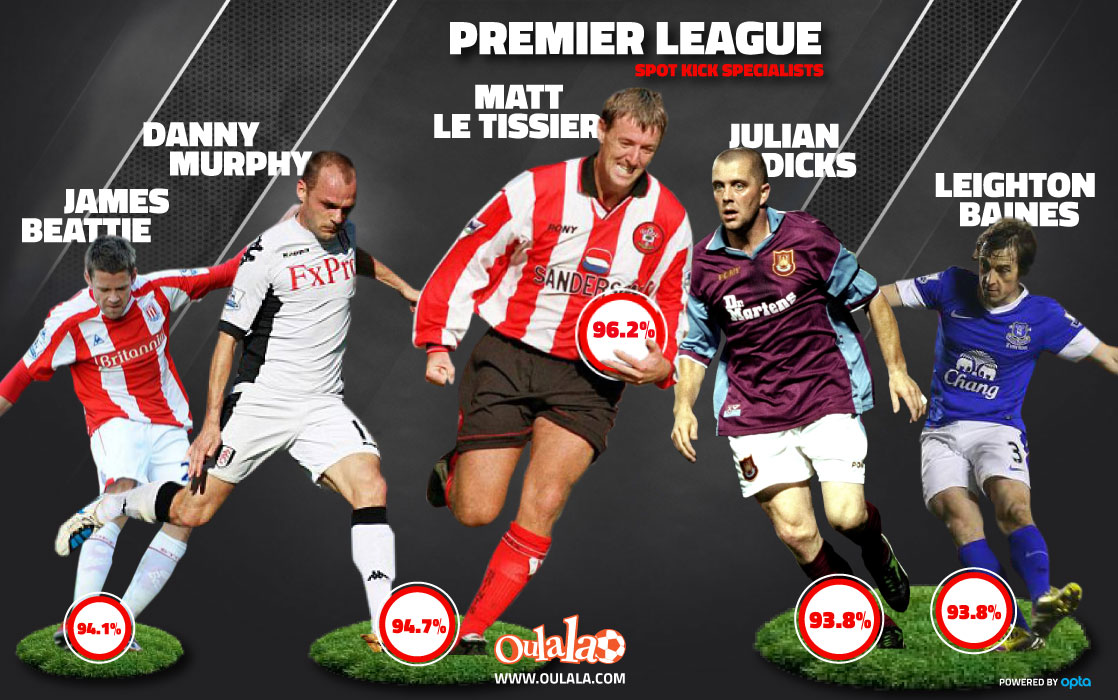 
David Ellis
2 Posted 22/01/2015 at 11:05:22
David Unsworth did not miss many either.
Peter Murray
3 Posted 23/01/2015 at 20:51:41
Roy Vernon was no slouch either. I remember one filthy night midweek at Leeds in the early sixties. A League Cup game? There were 3 of us together (Scouse Blues at Leeds University) amongst the travelling Evertonians behind the goal. We were awarded a penalty in front of that goal. Roy Vernon picked the ball up, sauntered towards the Evertonians and indicated where we thought he might put it. We all indicated to our right. He slotted it in to our right.

Each time, obviously, the goalie knew where that penalty was going. It was too well placed for him to get to.

Nobody, Real Madrid et al, would be able to afford them. What a deadly combination. Neither was fast or athletic. But both had great vision and were just so comfortable on the ball, Vernon with his hardly any back lift shooting ability, and the Vision who danced and shimmied and made tall, hard centre-halves like Maurice Norman look like beginners.

Loved the Holy Trinity and the Kendall teams but when Royston and the Golden Ghost, "the greatest with the most," turned it on, that team produced, in my opinion, some of the finest football ever played by any Everton team.

Peter (#3), I saw Puskas at 5 Stone (min ) overweight, spray passes left right and centre AND score a pen, rolled into the corner at South Liverppool.... Class eh, can't beat it.