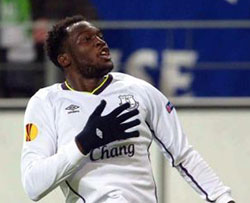 Romelu Lukaku's third-minute goal proved enough to secure three vital points
Everton won for the first time since mid-December, rallying behind Romelu Lukaku's early goal and earning a rare clean sheet in what was an unattractive but vital victory.

The Belgian scored the only goal in the second minute, sliding in to arrive at the right time to convert Steven Naismith's low cross after it had been pushed into his path by Julian Speroni.

The Blues were then forced to withstand periods of pressure from a Crystal Palace side that came into the game on a four-match winning streak but, despite some early jitters, Roberto Martinez's back line stood firm to deny Alan Pardew another come-from-behind win.

Just two minutes after the goal, Phil Jagielka had to hook the ball off his own goal line as Joel Robles hesitated against Dwight Gayle and John Stones blocked Yaya Sonogo's goalbound shot as the home side threw the ball into the box.

Stones was again on hand with a blocking tackle that sent Marouane Chamakh's shot over the bar to safety but Everton settled as the match progressed and might have doubled their lead late in the first half but Lukaku's touch let him down after Naismith had put him through.

Lacking composure on the ball at times, Martinez's men struggled to dictate the game in the second half but they successfully frustrated Palace with determined pressure and dogged defending.

As the contest opened up in the last quarter of an hour, Lukaku just failed to reach Aiden McGeady's low centre, Muhamed Besic saw a shot blocked by Scott Dann's hand, Lukaku fired into the side-netting and Speroni pushed a curling effort by McGeady away at full stretch.

Palace, meanwhile, were largely restricted to trying to crack the Blues' defence from set-pieces which were consistently repelled and McGeady wasted a great chance in stoppage time to kill the game but ballooned his shot from the angle.

Three hugely important points will lift some of the pressure on Roberto Martinez and his side after a poor run of recent form and provide them with a platform of confidence going into next weekend's Merseyside derby.