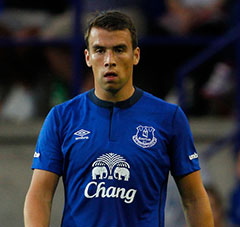 Seamus Coleman went close with Everton's only shot on target
The 224th Merseyside derby ended all square with precious little to excite a packed Goodison Park in what was a largely drab encounter.

Roberto Martinez welcomed James McCarthy back to the starting line-up, the Irish international going straight back into the side after five weeks out with hamstring problems, and deployed him in a middle three rounded out by Muhamed Besic and Gareth Barry.

New signing Aaron Lennon joined Ross Barkley on the substitutes' bench while Bryan Oviedo deputised for the injured Leighton Baines at left back.

The tone for one of the most pedestrian derbies in memory was set early on, with Liverpool initially controlling the game before Everton gained a foothold later in the first half but with neither side really able to create clear opportunities.

The reds were the more dangerous in the final third, though, as Raheem Sterling shot into the side netting, Joel Robles tipped Steven Gerrard's free kick over and Jordan Ibe smacked a long-range effort off the post.

The first time the Blues threatened Simon Mignolet's goal was three minutes into the second half when Kevin Mirallas's dipping free-kick dropped just wide of the post but Liverpool went close again at the other end when Steven Gerrard's acrobatic volley deflected off Steven Naismith and over the bar.

Lennon was introduced with half-an-hour to go and offered glimpses of his attacking talents but Everton were largely poor in the final third until Barkley threaded Seamus Coleman in with three minutes to go but Simon Mignolet denied the fullback by diving to push his shot behind.

Naismith, Besic and Liverpool's Jordan Henderson were booked for a late flare-up but there was little of the usual blood and thunder for which this fixture is renowned and it was not surprising that the game petered out to a goalless conclusion.