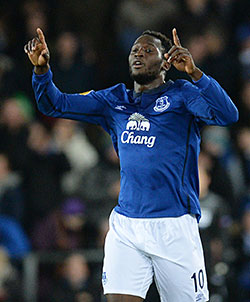 Everton haven't ruled out the possibility that Romelu Lukaku will be fit to face Southampton when their Premier League campaign resumes on 4th April.

The 21 year-old striker limped out of the 2-1 win at Queens Rangers last Sunday with a hamstring injury and was forced to withdraw from the Belgium squad for their upcoming Euro 2016 qualifier against Cyprus.

His club boss is hopeful that he will recover in time to face the Saints at Goodison Park next weekend based on his previous recovery times for similar fatigue-related injury.

"Romelu had his scan with the Belgian set-up and he's going to be receiving treatment for the next few days, and we'll see how that evolves," Martinez said.

"It's a bit of a hamstring strain due to the amount of games that we've played and the amount of fatigue we've accumulated in those games.

"We're quite positive because of the way Rom usually reacts to these types of treatments and how fit he is as an individual."

Darron Gibson and Arouna Kone are in similar situations as the Blues prepare for the Southampton match. Both picked up injuries at Loftus Road but while Gibson is ruled out of Ireland's qualifier against Poland, he has a chance of being passed fit and Kone's knee scan came back all clear.

Kevin Mirallas is also in a race to be fit after missing the last three games with a bruised thigh.


Will Jones
1 Posted 27/03/2015 at 19:03:06
I saw Lukaku over in Kyiv, I saw his head drop a few times. Also he shrugged his shoulders in frustration. He will be leaving sooner rather than later, I think. Shame really, although far from perfect, he is a striker who gets goals and that is good for any team in my book.
Colin Glassar
2 Posted 27/03/2015 at 19:13:28
Will, I think all of their heads dropped in Kiev. As for the shrugging of shoulders, they were all doing it. They looked like jelly at times.
Rom put in a shift over in Kiev and then in London. I wouldn’t read too much into it. I just hope he’s fit for the Southampton game.
Will Jones
3 Posted 27/03/2015 at 19:20:32
Thanks for being positive, Colin, fair point. I guess they couldn't handle 67,000 locals cheering the opposition! I also heard the president of Ukraine was there, no doubt giving a bonus to the Kyiv team if they put a good shift in.
James Marshall
4 Posted 29/03/2015 at 13:43:27
He always shrugs his shoulders because about 80% of the runs he makes are ignored by his half-arsed team mates. I'd be off as well.