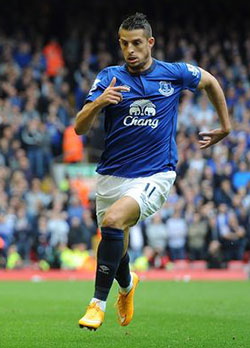 Everton extended their unbeaten run to five matches and closed the gap between themselves and the top half of the table with a slender 1-0 victory over 10-man Burnley.

Everton started with Kevin Mirallas in place of Leon Osman on the left side of midfield while Arouna Kone continued up front with Romelu Lukaku on the bench and they made a strong start to the game that suggested the Clarets would struggle to register their first away win since November.

Aaron Lennon's speed and directness typified the Blues' approach in the early going and when he was chopped down by David Jones right on the edge of the area, referee Mike Jones pointed to the spot with nine minutes gone. It was Ross Barkley and not Leighton Baines who took responsibility for the penalty but Tom Heaton guessed right and saved his kick.

Roberto Martinez's side maintained their forward momentum, however, and Leighton Baines forced a save from the goalkeeper with a powerful shot from the angle before Lennon fired narrowly wide from a central position.

Everton made what would prove to be the decisive breakthrough just before the half-hour mark. Lennon was again involved as he cut in from the right flank and fed the ball to Kone who laid it off in turn to James McCarthy on the overlap. Mirallas initially mis-kicked the Irishman's centre but rifled the ball home at the second half to register his 10th goal of the season.

Burnley came within a whisker of equalising just a minute later when Danny Ings's clever ball put David Jones in but he smashed his shot inches over Tim Howard's crossbar. Gareth Barry then snuffed out a chance for Barnes with a last-ditch challenge and the referee waved away claims from the visitors for a penalty for handball by John Stones before Kone wasted a great chance on the counter-attack by planting the ball straight into Heaton's arms.

Jones's chance aside, Howard's goal had been largely untroubled by Sean Dyche's side and their task grew exponentially more difficult when Ashley Barnes was shown the second of two soft yellow cards in first-half injury time.

It allowed for a comfortable second half for the Blues, albeit one that was short on real entertainment from the home fans' perspective. Kone forced a good save from Heaton when he prodded a Baines cross goalwards shortly after the restart and McCarthy sidefooted a gilt-edged edged chance the wrong side of the post from Lennon's square pass.

Heaton then foiled Baines again with a parried save to push the left back's stinging drive away from his goal and the Burnley 'keeper had to be in the right place again to stop Lennon's deflected effort as Everton continued to threaten without ever looking likely to bury their depleted opponents with further goals.

Lukaku came on for Mirallas with an hour gone and the latter Belgian skating on thin ice following a booking of his own for a high challenge on George Boyd but he would get just one chance to add to his tally for the season. Unfortunately, he slipped slightly as he pulled down Phil Jagielka's ball forward and Heaton was able to smother at the second attempt.

Seamus Coleman, meanwhile, hammered just wide from distance and McCarthy fizzed a left-footer half a yard wide while Ings despatched Burnley's best chance of the second half high into the Park End from a free header with five minutes to go.

The result keeps alive Everton's hopes of finishing in the top half of the table, bringing them to within two points of West Ham who have a game in hand but it sends the Clarets to the bottom of the table following Leicester City's win over Swansea.