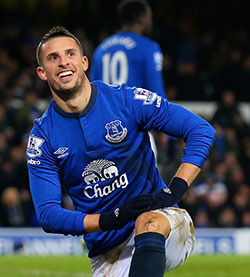 (Alex Livesey/Getty Images)
Kevin Mirallas has restated his desire to wait until the summer before deciding his future but he insists he is "confident" and happy playing for Everton.

The Belgian marked his return to the starting XI following injury with the only goal as the Blues beat Burnley to take their unbeaten run to five matches and he celebrated with a nod to the media chatter over his future.

Mirallas will have a year left on his current contract when the season ends, although Everton have the option to extend it by another year, but negotiations over a new deal have been shelved until the summer.

That delay, combined with the 27-year-old's admission that he wants Champions League football, has led to talk of him leaving Goodison Park when the transfer window opens but he rejects the notion that he is unhappy with Everton.

"A lot of people talk about my future, he said in a post-match interview with Sky Sports, "but I like to play for Everton and finish the season in the best form."

"After that I will talk with my partner (agent?), with my president and with my manager.

"But I am confident here. I'm very happy to play for Everton."

Mirallas has been linked with moves to West Ham and Tottenham in recent weeks, neither of which will be able to provide him with Champions League football, but privately he harbours dreams of playing in Spain.

I hope he stays and IĂ‚’ve no problem with any player with ambition.

Gavin Johnson
2 Posted 18/04/2015 at 20:08:54
He did today, what we all know he can do. I think heĂ‚’ll be silly if he moves. If he harbours Champions League dreams in the elite leagues, heĂ‚’ll be fortunate if he one of those clubs come in for him. If they do, I think heĂ‚’ll have problems cementing a first team place just based on his injury record.

If he gets injured at a club like Atletico Madrid, he isnĂ‚’t going to walk back into the team like he has done with us the last couple of seasons. That even goes for a club like Spurs who have more wingers than most at there disposal.

If he signs a contract extension, IĂ‚’ll be happy... If he doesnĂ‚’t, weĂ‚’ll get a decent wedge and buy someone else.

HeĂ‚’s a 27-year-old attacker whoĂ‚’ll have one year left on his contract. Spurs arenĂ‚’t going to offer him much more money than Everton can. He just wants his next contract settled.

Here, if you were him and saw all the money thrown at veterans on the downward slope, how would you feel? I still say heĂ‚’ll re-sign.

Now, heĂ‚’ll still own a Bentley thatĂ‚’s painted gold. That selfish, twatish, gold Bentley owning, um, something negative. Wait, I got it! That Belgian!!

I say he works out a contract and weĂ‚’ll see him next season in Royal Blue. And IĂ‚’ll be happy, despite the color of the car he drives.

A happy Belgian is a scoring Belgian.

HeĂ‚’s arrogant and I like that in a player Ă‚â€“ Ross Barkley would do well to take notice of the arrogance and self-confidence Mirallas displays.

Maybe someone should tell him about what happened with Pienaar a few years back?

Minik Hansen
18 Posted 19/04/2015 at 13:05:29
James Marshall, about arrogance Ă‚â€“ Kone lacks a bit of that. When there is a shooting opportunity, either he tries to dribble and then tries to shoot, or gives it to another player in a half-shooting position.
Steve Harris
19 Posted 19/04/2015 at 19:18:23
What Mirallas needs, and what we all need, is a decent manager who actually knows how to play a system that gets the best out of not only him, but everybody else as well, not some clueless fraud who shows every week just how out of his depth he is. Surely nobody has been fooled by a decent run of results but still dull, dreadful football... have they???
Harold Matthews
20 Posted 19/04/2015 at 20:48:05
Minik. I think you have to take the rough with the smooth when watching Kone. HeĂ‚’s not a natural goal-scorer like Mirallas, Naismith or Lukaku but he did play a vital part in last weekĂ‚’s Lennon goal and yesterdayĂ‚’s Mirallas goal.
Mark Andersson
21 Posted 20/04/2015 at 05:19:13
Lewis, according to some on here, none of our players can last 90 minutes.

Arrogance is something you're born with, Ross does not believe in himself enough to be the hyped player heĂ‚’s been portrayed as.

Richard Lyons
22 Posted 20/04/2015 at 15:34:38
Does anyone know the meaning of the "mouthy-mouthy" hand gesture he made when he scored?
Max Wilson
23 Posted 20/04/2015 at 16:20:08
L.Barclay above seems closest to reality and his warning of being careful what you wish for is true of the "big clubs". We deserve some loyalty from Kev because he has been praised and appreciated by us fans and while his frequent injuries have been inconvenient, the club has done everything possible to help him each time. Loyalty should cut both ways and we fans have been dissapointed when he has appeared not to appreciate this.
Nicholas Ryan
24 Posted 20/04/2015 at 23:01:10
Dear Kevin,

Real Madrid and Barcelona wonĂ‚’t buy you, because youĂ‚’re not good enough.

Which bit of that, donĂ‚’t you understand?

HeĂ‚’s a luxury and if heĂ‚’s not at it then heĂ‚’s not worth being on the pitch. IĂ‚’ve always hoped Kev would Ă‚’get itĂ‚’ as he aged but I donĂ‚’t see it happening yet. IĂ‚’m not sure what his wages are but I would like to think we could do better.

Trevor Lynes
26 Posted 21/04/2015 at 22:30:36
FFS, none of the attacking midfielders can last 90 minutes but, if he can score double figures despite missing a few games, he will do for me. Talk of getting a good wedge for him sounds like someone from our board of directors.

I am a fan who wants to see my team win every game and play well. I am not in the least interested in selling one of our prize assets then see the profit made vanish into the BK treasure chest. We never spend more than we take and the board do not invest themselves.

BK does not want to sell, he wants an outsider to invest money that he will not himself and that goĂ‚’s for the rest of this pathetic board. Managers at Goodison are just there to take the brickbats that the board should be fielding. Well-paid punch bags IMO.

We will not get an adequate replacement for Mirallas if he is sold. What we really need above all others is a top play maker who can provide goal scoring opportunities. The best we have had in recent years has been Baines of all people. Our midfielders are basically mediocre with no one coming through from the academy except defenders.

Graham Roberts
28 Posted 22/04/2015 at 19:28:06
To answer RichardĂ‚’s (#22) question, the hand gesture means Ă‚’shut the fuck upĂ‚’. At least it does in the northern French city of Lille (where I live and where Mirallas once played), so it must mean the same thing in Belgium. I thought it was a universal gesture, but IĂ‚’ve lived so long away from the UK that IĂ‚’m not sure any more.

Agree with Minik (#18) that Kone should be a bit more arrogant. Fingers crossed youĂ‚’re right (#9).

Also agree with Trevor (#26) that we (desperately) need players who can score 10+ goals a season. COYB

Tim Michael
29 Posted 24/04/2015 at 18:40:52
The game against Burnley just about summed up Kevin Mirallas. Scored a goal (after a hash of a first attempt), made a cowardly tackle that he should have been sent off for, stupid showboating flick when we were in a promising position then subbed bang on 60 mins (as I predicted at the start of the game). ThatĂ‚’s Kev all over. You get good and bad out of him.

To be honest, I think heĂ‚’s become lazy and that probably due to a degree of disenchantment with his role at EFC. During the Southampton game, Martinez withdrew Kone and put on Naisy with 20 mins to go. It was the ideal situation to bring on Mirallas. I think he would have revelled in the centre-forward role in that last quarter of the game especially when opponents were becoming tired.

It's now really down to Kev if he wants to stay. One thing I will say is that if he contributes 10-15 goals in a season, I will put up with our 60-minute man!!!