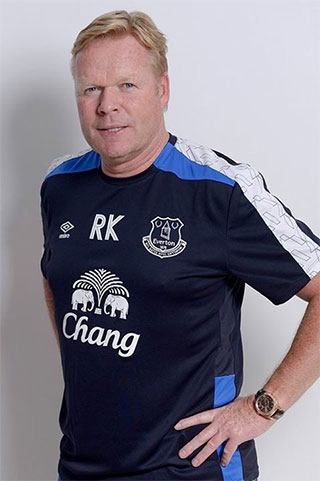 A return to Finch Farm for many of the Everton first team squad means pre-season training and an opportunity for Ronald Koeman and the new coaching staff to get to know their players.

Most of the players who have been competing at Euro2016 or Copa America will join up with the squad later this month, although Bryan Oviedo was among the players returning to Finch Farm following Costa Rica's early exit from the latter tournament.

Koeman and the backroom staff that he has padded out since agreeing to become the Toffee's new boss last month, will be putting their new charges through their paces at Halewood for the first time this week. They will then jet out to their training camp in Austria next week.

“I'm very much looking forward to getting down to work,” Koeman told evertonfc.com. “I'm extremely full of energy after a long summer and the players have had a lot of holidays as well.

“That's one of the reasons I decided to change the date for starting the pre-season because it was planned in for 7 July and we changed it to 4 July because I think the best pre-season is five or six weeks of planning.

“After a long holiday, the boys need to work and to get back fit to play football.”

“With a new technical staff, we need to show them how we will work together,” Koeman continued. “[We will be] organising in the training sessions, we will have some good friendly matches and it's all about preparing the team for the first Premier League game.


Kevin Rowlands
1 Posted 04/07/2016 at 15:22:31
Did anyone else notice in the clip of Koeman at Finch Farm this morning, Lukaku's shirt was hanging up right behind him in plain sight.

I think there's a subliminal message being sent, notice how the rhetoric has been completely toned down as well. Looks like the Lukaku camp have been well and truly told to shut the fuck up Everton are calling the shots, good!

If nothing else, I fully expect to see a fitter squad this season, containing hopefully Romelu Lukaku and John Stones!

My exact thoughts, mate. When Lukaku was away with Belgium, there was some "loose talk" that does seem to have ceased or completely altered content since RK held up the royal blue and white scarf.

I would love to be a fly on the wall at Finch Farm, some prize expressions on them faces. RK is a "Big Unit", but his career and reputation utterly dwarfs the sum total of everything that our entire squad, plus all our coaches have accumulated.

RK can look at any of them and say.... "Show me your medals, cupcake!"

The thing that appeals to me most is Farhad let him shoot his mouth of for so long before he made this move and another sign he's not a man to be messed with.

Interesting to see Jags referring back to the Moyes fitness regime when "they were told to run until they were physically sick".

Retro, I know, but got you bloody fit!

I noticed that too. I didn't see the clip, but I saw it in a photo on NewsNow. It was very strategically placed and it seemed to be making some kind of a statement to the effect that Lukaku's bought into the Koeman revolution. (It wont be long before this phrase finds its way into the dictionary...)

Paul Setter
18 Posted 04/07/2016 at 21:06:00
Glad to hear it, though I would have started on the 1st. I think he will be a very busy this summer – we have a lot of dross in this squad and, for us to move forward, good players can't paper over the cracks, so a good percentage of them need to be shown the door.

Oviedo, McGeady, Kone, and Niasse and the not good at anything at all. McCarthy would be a good start. Bring the decent signings in along with the rest of the squad and a few of our talented youngsters and things should be looking brighter.

The last manager forgot that footy is still a running game and most of that running is without the ball.

Lets hope that this pre season we get our new signings in early and get them bedded in properly.

Billy Bingham also had them running up the
sandhills. He lived near Southport.

Colin Metcalfe
32 Posted 05/07/2016 at 22:46:33
Good to see our Uruguayan striker in there with the rest of the lads , if Leandro Rodriguez can get fit and sort his hammys out he could be a great back up striker to Lukaku if he stays !
Amit Vithlani
33 Posted 06/07/2016 at 09:26:41
I noticed a few things which gives me hope of a new uptempo style. There was a drill showing one touch passing followed by a drill where the players had to control the ball and pass back in two touches.

It was also good to see Tom Davies and Pennington featuring prominently. I hope they get a few starts in the coming season