Everton players, staff and fans have completed the Goodison Sleepout to raise funds — and awareness — for Everton in the Community's homeless projects in Liverpool.

Blues' Under-23s boss David Unsworth, along with his playing squad and coaching staff, joined 50 fans and Everton Business Club members for the sponsored sleepover in the Park End stand.

The Everton in the Community fundraising event took place on the coldest night of the year so far - with temperatures dipping as low as -4 degrees Celsius inside Goodison Park.

Everton Director, Deputy CEO and EitC Executive Chair Denise Barrett-Baxendale was on hand during the evening to talk to the participants and addressed the group afterwards to thank them for their endeavour and to reveal that the fundraising coffers for the event had been further boosted by Chairman Bill Kenwright.

She told evertontv: “The Chairman called me in the early hours having watched the coverage of the fans and the Under-23s here tonight and confirmed he and the Club will kick-off with a £23,000 donation to really move the homeless project on. That donation couple with the sponsor money in excess of £7,000 already raised will pay for a project worker for a year, so those are vitally important funds.”

And there is still the opportunity for fans to further boost the fundraising total. To sponsor Unsworth and his young Blues visit justgiving.com/fundraising/EvertonU23s.

Unsworth was moved by the Chairman's donation, saying: “We can't thank the Chairman enough. His generosity is amazing and we love him dearly. We do this to make a difference - it is something the Club and Everton in the Community have been doing for years and that is why the charity is world renowned.” 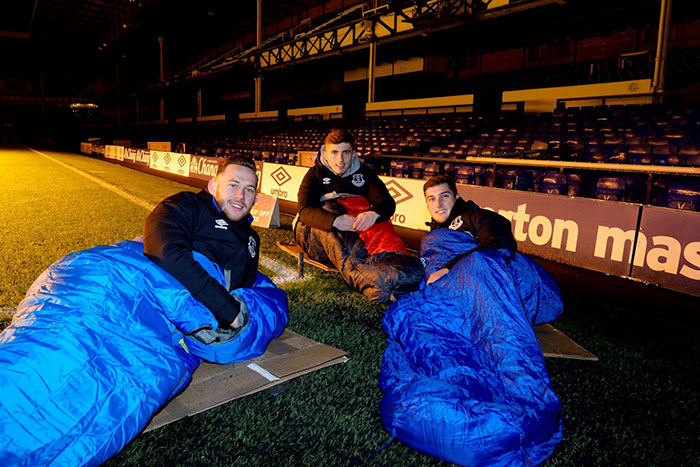 The Under-23s boss was also delighted with the way in which his players handled the experience.

He added: “It was a tough night, it was really cold. But we got through it. The lads really took to it well. It was great to share the night with the lads and the 50 supporters. We've had some good chats during the night and it was nice that we were all together doing it for a great cause.

“For one night, we can sit there and say we did it. But we were all wrapped up with layers of clothing on. There are people out there doing this for real and that is the scary thing. That is why we are doing this - because we want to stop this. We want to give all those people on the streets of Liverpool a helping hand and get them off the streets and somewhere safe where they can get back on their feet again.

“Everton is the biggest family in football - and the work Denise and her amazing staff do is brilliant. To have the opportunity to raise funds and raise awareness is great for us and we would do it all over again.

“This group of lads are a great bunch. Not only are they the best group of players I've ever worked with, they are also the best group off the pitch as well. They are so humble and so honest and that is why I think they have big futures ahead of them.”


Patrick Murphy
1 Posted 26/11/2016 at 17:34:38
It's all very laudible this EitC stuff and I'm sure it's fully appreciated by those who get the help they so desperately require, but I can't help but think that the charity would benefit even more if Everton FC were competing in the Champions League on a regular basis.

So I think a new organisation should be formed such as EitCL â€“ Everton in the Champions League â€“ with 10% of the profits going to EitC , if the newly formed EitCL was as dedicated and hard-working as the staff who run EitC we would all be the happier and feeling far more charitable.

Martin Luther
2 Posted 26/11/2016 at 19:15:09
Very impressive of the guys, not nice sleeping outdoors and at minus 4 it would be unthinkable. At least they had the warm clothing and bags!! Nice touch from the chairman and another impressive effort from EitC... well done Unsy!
Andy Meighan
3 Posted 27/11/2016 at 23:40:42
I love Unsy and I would've loved to have been there but unfortunately I had work the next day.

No sign of miserable Ronnie though. He probably doesn't even know who Unsy is...