Comments (22) :
Hey, just wanted to share with you guys about when Tim Cahill turned up at a fans' event here in Singapore last week.

It took two months to do this ? having to wait till the squad was announced for the Asian Cup, and the Football Federation of Australia were not that keen as understandably they are focusing on their build-up for the tournament that is next week. However, when Tim got to hear about it, he was insistent on appearing, and despite an unavoidable last minute change of date, everyone of the 80 people invited turned up.

Due to an appointment with a physio, we only had him for 30 minutes, but he would've stayed longer if he could have.

In this day and age of players not giving a shit about their team or the fans, and taking any opportunity to get a big money move it was refreshing to hear how:-

At the end when I took him out to the waiting car, he told me how much he'd enjoyed it.

We can all criticise players from time to time for on- and off-field performance, but should also give credit where it's due (which I know most of you do).

Now I'm just hoping he's playing in the first game in Bangkok against Oman, as I'm hoping he'll spot me in the front row and swap shirts at the end!

(Cheers to TW for your stats and info pages ? gave me a lot of good material to use in the interview!) 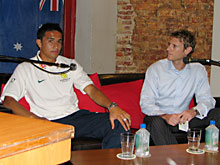 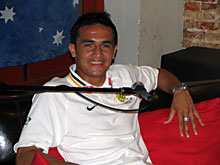 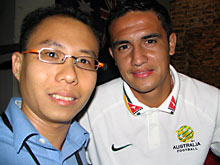 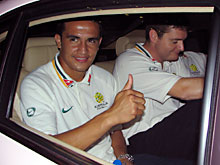 I can second what a top lad Tim Cahill is. Me and the Mrs had the pleasure of meeting Tim when he was suspended last season and he took the time to take a well earned rest. I was taken aback how down to earth he is and how much he loves his job and how the club has got to him in such a big way. I wish we had a lot more like him ? he told me that he intends to see out his career in the Royal Blue...
James Belfast
5   Posted 01/07/2007 at 18:45:18

Commend the lad, it's good to see people who earn mega-bucks, but still have their heads screwed on. Hopefully we will get to meet some of the players in the upcoming NI vs Everton game over here... as far as I know, the whole ESCNI got their tickets as soon as they were released, so onward and upward for the gents of the mighty Blues!
Neil Pearse
6   Posted 01/07/2007 at 22:33:34

Moyes should make Timmy captain. It would boost his game even further, and he?d provide a lot more presence and motivation than PN. Perhaps start this season by having him lead the boys out when Neville?s not playing.
Kieth Glazzard
7   Posted 02/07/2007 at 00:28:07

To save space, I won?t repeat all of the above, except I don?t think you should make your ? what is he? rogue, gunslinger, joker, bolloxoff worker ? team captain. That is someone else?s job, and Moyes has made a good choice, for me, already.

But the story really is in the headline ? loyalty. We could easily have lost Tim, and Mikel, this close season (when was that?) but we haven?t. Their deals have to be competetive, but they could, I?m sure, have pulled in more from the Newcastles of this world. I read in these pages that Mikel would be a redshite next year. I?m not sure if DM can speak Spanish, but I?m sure he tells agood story in which ever language he?s using ? sometimes I have to wonder which one it is myself.

Loyalty ? now when was the last time you heard that in football? If you?re looking at loyalty, look at Scott Parker. Moyes wanted him to drive his midfield forward. Ex shitehawk curlybonce offered him a mansion in Northumbria. He went and was made team capt. Now a West Ham player. I wish the lad, and his agent, no harm, but our little twins shine out like gold in comparison, don?t they?
j!nder
8   Posted 02/07/2007 at 02:23:56

Tim you are a true gentleman. I was there and it was a great pleasure meeting him for the 2nd time (1st being in Bangkok 2 years back). A great personality, a real good example to the youth where fame is all not important but family as well. He meant it when he said he was very happy at Everton where everyone helps everyone and it does not matter where on match day each is told to play in which position. Everyone works for eveyone. And the new 5 year contract confirms and reaffirms my point. I am sure a few more seasons of top performances and he will be an Everton legend if he isn?t already. And it was a great privelage to meet the legend....
Mikhail Ridhuan
9   Posted 02/07/2007 at 04:20:07

Really disappointed Tim couldn’t play for the warmup against Singapore at the National Stadium. Would’ve been awfully nice if I could see him in action. Instead, I have to cover my ears when the majority Reds cheer for Kewell when he came on.
Ed Lim
10   Posted 02/07/2007 at 10:04:21

My family and I were so looking forward to seeing Tim in action against Singapore last Saturday. When the teams were announced, we were very disappointed that Tim’s name was missing. Nevertheless, seeing how he has made time for overseas Blues fans despite his injury certainly showed that he is an Evertonian through and through. Well done, Tim!
RandR
11   Posted 02/07/2007 at 10:46:52

theres nothing like a good aussie upbringing to drill sense into a man ;)

My dream was fulfilled yesterday at Bishan Stadium when Australia took on Singapore Under 23. During half-time, I was invited to go to the VIP Lounge (I serve as a member of Football Association of Singapore’s Player Status Committee) for refreshments. There he was, Everton’s hero, Tim Cahill. I wasted no time in taking a photograph with him and also had a chat with him. To my horror, he denies that he has agreed to the new 5 yr deal that has been reported in Everton’s official website. When I was leaving the stadium, I told him, "I hope you will sign the contract with Everton." He said, "Sure mate!" Not sure how much weight I can put to that. So, Has BK been upfront with Evertonians?
Shawn Mahugh
15   Posted 02/07/2007 at 17:20:12

I had the pleasure of meeting Tim Cahill when he came back home to Aussieland...

Timmy called up his local school and ask if he himself could come and say hello to the kids, he didnt invite the media (although one very lucky and surpirised photographer was near by)and spent over 3hrs there.

In that same time, he wore part of his everton gear and when asked by the kids what the best team he thought was in england he said "that?s easy, Everton! it?s a great club, a massive sleeping giant and he wants to be part of making it wake up...

Apart from the always a blue possee such as Stubbsy, there is only one person who I wouldn’t cringe when they kissed their badge,and that’s Tim.

Always get worried about badge kissers, but when he gave the interview before last years thrashing of Liverpool, it seemed from that interview that he had "got it", and I knew we would win.

Rabid Abid has lost contact with you and wants to speak see you son as poss. Everyone is wondering where you are ??? I know its a long shot but I’m heding my bets there aren’t many Matt Traynor’s who live and breath Everton working in Singapore. So just in case.....