Qualification for the knockout stage 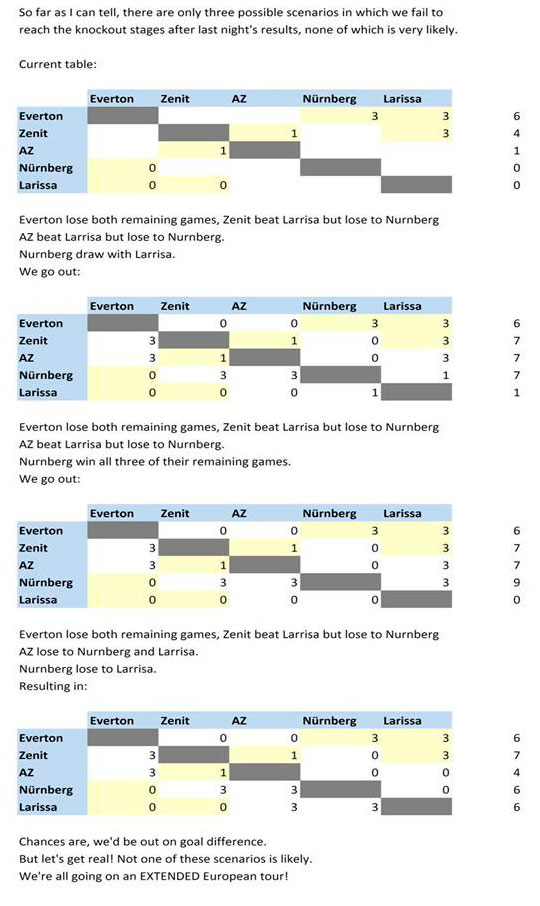 I think you have disproved your own point. As you have ably displayed, there are still several sets of combination results which would mean everton do not qualify. Clearly, the more there are, the less "unlikely" it is. The bottom line is that we need a further point to guarantee qualification.

A good piece of work Steve, certainly saved me from trying to work it out. As Jeremy points out, we need a point to make certain of qualification but i am hoping to win both our remaining games as not only will this mean we top the group, it will give us a higher ranking for future tournaments. I have also heard ( not confirmed ) that the group winners will play the 3rd team from another group, whilst the 2nd placed team plays one of the CL dropouts. For this reason we need to win the group like Boro did when they got to the final as its a much easier passage.
Harry Tarrent
3   Posted 10/11/2007 at 10:38:50

Now we’ve won the UEFA Cup and all set for three points at Chelsea,there doen’t seem much point to the season,does there?Obviously we shall get to see Wembley twice in those other competitions and Moyes will be made manager for life.
Talk about counting your chickens! This being Everton, the more likely scenario is that we shall finish ninth in the league and get knocked out of all the cups by bent referees.And moan about it for years!
Paul Johnson
4   Posted 10/11/2007 at 11:54:55

Harry, you are obviously one of the glass half empty variety. No doubt you sit moaning through matches, slag off certain players and moan even when we win. Me, I look for positives, support my team & manager and take pride in my club. We have had enough to moan about over the last 20 years, cheer up you miserable git and enjoy the moment.
tony ainscough
5   Posted 10/11/2007 at 22:11:04

I’ve now tried to calculate the probability for us going out. As the mathematician I am.. The number I came up with was 0.035. 3 and half percent. That may just be enough considering how unlucky we sometimes are. But my guess is that we’ll win this group by a good number of points!

If Zenith and AZ win tonight (which is the most likely results) then we will qualify. That is if on equal points two teams are separated by head to head and not goal difference. I’m not sure what the rules are on that one.
Tim Lowe
11   Posted 29/11/2007 at 10:15:34

Fair play to you for working all that out but you have way too much time on your hands mate.
We can qualify tonight and in my opinion will. Even if we dont, we should get at least a point next week
Greg Murphy
12   Posted 29/11/2007 at 10:28:20

Hakon - I’m fairly sure head-to-head is the first separating criterion (as per Champs League groups).

So whatever Larissa do from here on (maximum 6) we knock them out on head-to-head.

And if Nurnberg lose tonight (good probability) they’ll only be able to get a maximum of 6 and therefore we knock them out on the head-to-head, thus guaranteeing at least a 3rd place.

What is it with Evertonians now adays.
We need this team to do this, another team to cock this and the ref to knob that and we will be out.
Here?s a simple scenario for you.
We win the next UEFA cup game in a style and manner we are becoming accostomed to and we are through.
Do you guys sneak under your matresses with copies of the league table and work out the permutations for our fall down the table. Are you all mad.
We are playing well, our confidence is growing, we are going to win games, we are going to lose games.
We will win games we should have lost, we will lose games we should have won.
Has ever been so.

If Friedrich Von Paulus and his Sixth army had turned left instead of right at Stalingrad, Russia might have fallen.
If only Old One Ball hadn?t been a raving lunatic, or had met and married a good scouse girl when exhibiting his paintings at Liverpool art college he could have manager of the Shite. Come to think of it Rush has a likeness to the Fuhrer.
Please, please, please grow up.
It is all very well speculating, but look what happened when Germany allowed a nutter to run the asylum.
COYB
Hakon Raustol
14   Posted 29/11/2007 at 10:27:53

Me again..
I guess head to head would be unfair since the teams don’t meet home and away. So i guess goal differnce will decide

So we won’t be 100% sure tonight. But if Zenith win (no matter what happens between AZ and Larissa, my fault) then there is only on goal difference we could get knocked out. That is if we lose both games an either Larissa or Nurnberg win both there last to matces.

We allready have 4+ and N and L -2 and -3 so extremly unlikely that this would happen.

Hakon - you’re right, I’ve just checked on UEFA.com and it is goal difference that counts first. My mistaken assumption.

I know there are a various permutations and all that. . . but come on fellow Blues, who cares what they are? Lets get behind the team next week and hope that this team will stick several goals past the opposition.

Harry Dean:
In your recent post you said
’’Please, please, please grow up’’ to your fellow Evertonians - I’m thinking that its you who needs to grow up. Its all well and good telling us the finer points of the German/ Russian conflict, but could you try and use paragraphs in your posts rather than just sentences.
In a nutshell, don’t throw stones in glass houses.

This is the order for qualification if more than one team finishes on the same number of points.

3) higher number of goals scored away

5) higher number of away wins

6) higher number of coefficient points accumulated by the club in question, as well as its association, over the previous five seasons ( Team Ranking)
Micky Norman
20   Posted 29/11/2007 at 20:50:53

After a day’s graft I look forward to reading some of these threads whilst the missus watches telly. Thanks lads. This has been one of the funniest for ages.Please keep it running.