Kirkby — Confused? You Will Be

It’s never easy being an Evertonian, on the pitch, whilst not exactly snatching defeat from the jaws of victory against Villa on Sunday, it would have only been a draw at best, the mercurial team performances continue to frustrate the hard core of supporters currently attending Goodison Park. Off the pitch the situation is even more mystifying. The public face of Everton would appear to be pursuing a policy of relocating the club to a town nine miles from the city centre. This is despite knowing that at least 40% of their supporters are against the move, having no evidence that their supporters will attend Kirkby at the higher levels required to generate increased revenue, not having a penny of the £78M contribution required and now knowing that the vast majority of new stadia simply fail to deliver.

Why are members of KEIOC and others so vehemently opposed to Kirkby? Amongst other reasons it simply doesn’t have the all important wow factor; if Everton are going to move it should be to a stadium in a location that will readily attract additional Everton supporters and provide the maximum opportunity to generate much needed non-matchday revenue. We already know that 37,000 supporters will flock to Goodison, 40,000 if the conditions are right. Will moving to a run of the mill stadium on a retail park nine miles from the city centre, departing from which will be dictated by the infrastructure needs of a town of 42,000 inhabitants, be conducive to Everton’s immediate needs? Will all these factors conspire to ensure the guaranteed failure of “Destination Kirkby”? No site is perfect, Goodison is far from perfect yet 32,000 were there on Sunday; however would this figure increase by 70% if we were in Kirkby? The simple answer is I don’t know but more important is does Everton know?

When you understand the reality that Everton need to grow their current attendances by 70% in the face all these problems you begin to comprehend the enormity of the challenge they have undertaken.

But never underestimate the power of marketing and the so-called new stadium effect. However this doesn’t last forever, as can be seen above, these are all the new stadia built over the past twenty years compared with traditional or redeveloped EPL stadia capacities, taken from the 2008 Deloitte report, it demonstrates graphically that new stadia simply don’t live up to their expectations. The exceptions are Arsenal and Reading. Arsenal could demonstrate a significant demand prior to their move and Reading constructed a small stadium that clearly reflected their requirements. Deloitte warn of the need to get things right, a warning that should be well heeded. Everton are unable to demonstrate demand in either general or corporate capacity but can comfortably demonstrate significant opposition to a move to Kirkby.

The challenge to fill the stadium is a difficult one, a very difficult one. It’s a riddle wrapped in a mystery inside an enigma, get it right and Everton will develop the platform that should enable them to press on in arguably the most competitive league in the world, get it wrong and the stadium will become a millstone of perhaps epic proportions.

Is the location of the site a contributory factor to the overall success of any possible future relocation? I would say yes but others may disagree. As you can see above, according to the RAC, the average distance from a city or major centre is less than three miles, Everton propose taking the club nine miles from the city centre of Liverpool, will this work? Does it work for Bolton, they’re only 5.5 miles from Bolton.

Finding the perfect location is extremely difficult. Look at these plans for the Clarence Dock, when Everton originally looked at these they were advised, according to Paul Gregg, that they’d be unlikely to obtain planning consent and they moved on to consider the Kings Dock. The owners, Peel Holdings, were said to be unreceptive to the idea of having a football stadium on this particular tract of land, later favouring their Liverpool Waters concept. But circumstances change, whilst any significant retail, this close to the city centre, wouldn’t have a hope in hell of being granted planning permission with a will to meet this challenge such a stadium could be constructed and financed for the benefit of the landowners, the club and its supporters.

Even a stadium similar to that originally conceived for the Kings dock could fit on the Clarence dock site, supported by non-retail based enabling developments in the hotel, leisure, commercial and residential sectors, such a site would offer improved opportunities from stadium naming rights deals and better exploitation of the banqueting, conferencing and concert industry.

Even a shared stadium, with all its problems of acceptability to both sets of fans could fit on that site and provide footfalls of up to 200,000 per week during the season coupled with immense opportunities for non-match day revenue during and outside the season. Through the utilisation of innovative products such as Equity Seat Right, phenomenal stadium naming rights opportunities and the aforementioned commercial possibilities offered by a true destination, possibly the most unique football stadia in the world, the construction costs could be raised at no cost and importantly no debt to either club, meaning increased funds for on pitch activity. The disparity between differing requirements in the attendance capacity and apparent cultural difference could be accommodated through the utilization of novel architectural design, engineering and technology. 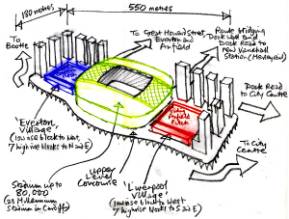 The above business model could also be applied to a single use stadium located close to the city centre, even a redeveloped Goodison could utilise some of the elements although the loss of the stadium naming rights funding and the potential loss of capacity during construction could be challenging but hardly insurmountable. A redeveloped Goodison would represent the preservation of a historic stadium and it should never be forgotten that once its gone it’s gone forever.

Of course a change in ownership would change everything. With sufficient available wealth the right owner could fund the clear shortfall in the capability of Everton’s plan to raise £78M for Kirkby, it was noted that Everton have already added equity funding to their funding option list since last year.

Amanda Staveley has stated that Arab businesses are being attracted to English football clubs because they represent 'the key provider of digital content on media platforms worldwide'. How many people around the world would pay $1 to watch a single match on the Internet or another media platform? Ten, twenty, thirty million? Miss Staveley represents powerful cash rich organisations such as DIC and QIA. DIC has expressed their interest in acquiring Liverpool, although this has waned at the moment, once the pressure of their financing methods has taken its inevitable toll on Messrs Hicks and Gillette they’ll be back in for the bargain basement sale. The Qatari Royal family are behind QIA, Sheikh Tamim Bin Hamad Al Thani, a sports mad Qatari Royal prince, heads this investment vehicle.

Will Peel Holdings change their mind over the Clarence Dock, will Tesco obtain planning permission for their massive retail park, will Everton’s current custodians sell their shareholding for the benefit of the future well-being of the club, will a new owner propel Everton into the stratosphere of the EPL, and more than anything are we going to beat City and Chelsea over the next couple of weeks? Who knows, maybe one day we’ll fulfil our destiny, we already play in ROYAL blue after all.