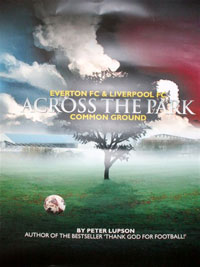 The venue was the City Exchange the home of the Echo in Old Hall Street, gathered there were 80 guests from the media and acquaintances of Peter.

The new book ‘Across the Park’ is a celebration of the passion, roots and rivalry that Everton and Liverpool share. It tells the story of the church minister responsible for setting the ball rolling towards the club's birth; the acrimonious spilt that led to the creation of LFC and the hugely significant gestures of reconciliation since. The story of two tribes so to speak.

The night started off early with an introduction by Everton fan Ken Rogers, executive editor of Sport Media. Ken spoke glowingly of Peter Lupson and his previous works including his nationally celebrated work on the book ‘Thank God for Football’ which led to five graves of founder members being found and restored with the respect the founder deserved. Peter even found that one or two clubs had got their forming dates wrong and are now rectified, such is his meticulous detective work. I have expected Peter to look like a mixture of Colombo and Sherlock Holmes.

Peter comes from Ely near Cambridge and nailed his true colours to the mast admitting he was a Norwich fan from their Third Division South days to the present hard times again. So I think Peter knows about football rivalry to a degree as the Ipswich/Norwich derbies are quite feisty. Along with his wife Evelyn, Peter lives on the Wirral teaching.

When Peter came to talk to the gathered audience, I thought to myself this guy could have been a minister himself and if he had taught me I would have listened more and learned more, such is his magnetism  that leads you towards his every word.

Peter told us that, coming from his backwater small town to the Metropolis that is Merseyside, he felt like he came to the Hollywood of football. So many big names littered the two main rival teams. The only time he touched Everton and Liverpool before was when playing Subbuteo.

He wanted to make sure when writing his book that there would be no bias and showed his works to fans of both sides to see that he was a fair referee. But he did use a blue pen and his son and heir is a Blue... although his son in law is a red.

Peter told us that we had two fantastic clubs and he felt so lucky that he could get two slices of the magic that occurred at the weekends when visiting Everton one week and Liverpool the next, which was commonplace in the fifties and sixties as away travel was both costly (and still is), and geographically a test with poor road systems at the time. 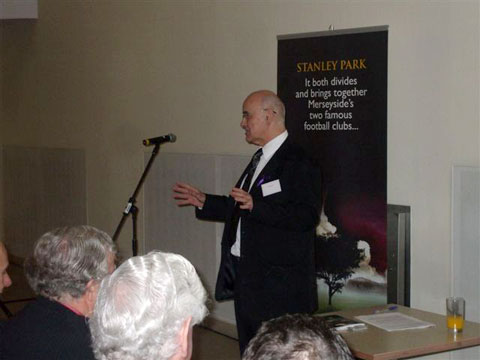 Peter went on to speak about the infamous split in 1892, which at the time was bitter and acrimonious due to John Houlding, a local brewer and owner of Anfield demanding exorbitant rent from the tenants, Everton. As Everton got more successful, they were League Champions within ten years of their formation, so would Houlding’s demand for more rent, until George Mahon led a rebellion.

Before next season, Mahon and Baxter, the two main Everton directors, bought land in Mere Green and raced against time to get the ground ready for the new season. Houlding was left with an empty ground to fill and just three players. He even tried to keep the name Everton but when attempting to register it, was dismissed out of hand... hmm — which brings us to them trying to take the Liver Birds as their own presently. Some things never change... but I digress.

Everton’s early history held a Christian ethos and nature which was enforced when John Houlding died in 1902. The Everton directors decided to forgive and forget the past and at the founder of Liverpool's funeral, three players from each side carried his coffin with all of the Everton directors in attendance.

In 1903, Everton director Baxter led a deputation to complain to the local council that the present tram system servicing Walton and Anfield was inadequate for both sides and to get it sorted. Then in 1905 a joint matchday programme was published, which went on for 31 years. David France's collection I believe has nearly all the eleven hundred issued. Our clubs where one unit so to speak at the time.

Liverpool were in the Second Division, Everton in the First. The reds were competing with Man Utd and Bolton for promotion. One game when Bolton played pushing for leadership, both Liverpool and Everton players went to watch to find the chinks in their armour. The more experienced Everton players  giving the reds valuable information for tactics and fitness.
When Everton won the Cup in 1906, beating Liverpool along the way in the semi-final, the Liverpool directors came to St Georges Hall to welcome the Blue heroes back. 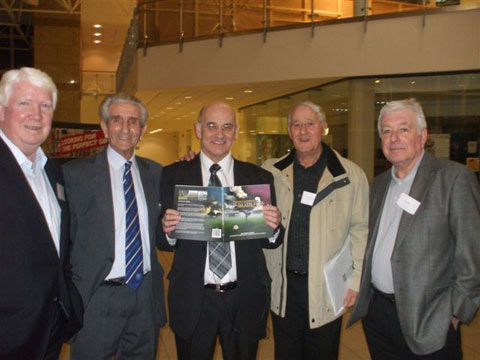 Will Cuff of Everton and George McKenna of Liverpool become two of the most powerful men in football during their time and great friends off the field. At Everton’s 50th anniversary in 1929 both sets of directors gathered at the Philharmonic Hall to celebrate. When John McKenna died, Will Cuff wrote at the time he had lost a life long friend and was deeply saddened.

Sir John Moores was also a major shareholder in Liverpool FC and an advisor, which I did not know. He told the Liverpool directors who picked the team it was not the way forward and that a coach should do the task. He even asked the late great Matt Busby who he could recommend and the Huddersfield’s coach was his recommendation, enter one Mr William Shankly.

At that time, Liverpool had a transfer ceiling of £12,000 which stifled the club when entering the player's market. Sir John helped get their financial house in order not even taking any dividends from his shareholding with them. Err thanks Sir John!

Of course, Sir John was also responsible for bringing Harry Catterick to us after sacking John Carey for finishing fourth. Sir John was a contempoary Abramovich, demanding only the best. Although he never really gave money to Everton — only loans and a wealth of advice and inspiration, building a world class (at the time) stadium, hosting a World Cup semi-final and the envy of so many.

Sadly how can we talk of the relationship of the two clubs without mentioning the name of Hillsborough, a tragedy not just for Liverpool but of the whole of Merseyside, especially and globally. I’ve always said, but for the flick of a coin, this harrowing chapter could have had our names on it. Everyone on Merseyside knew someone who knew someone that was bereaved.  We where all touched in  way that I have never known in my lifetime. We were united in grief, like Colin Harvey said at the time, we were not divided here. Who could forget the thousands of scarves both Blue and Red hanging on the terraces of the Kop. The mile length of both scarf’s joined together across the park.

Even sponsored running teams in Red and Blue ploughing their course to Hillsborough to lay wreaths for so many loved ones. You see, as much as I respected Shankly, he was wrong with one of his so many famous quotes: football is more important than life and death. During this sad time, fathers sons and daughters were cruelly taken away by decisions in my opinion made by the Sheffield Police.

Memories of the time that will live forever on that black day. The emotional scenes at the Cup Final that I thought should never have been played when "Merseyside, Merseyside" boomed around Wembley. Who ever won the cup, it was going to be  an empty, hollow victory. Our boards should have said No when we both got to this final.

Those band of brothers days  now seem a distant past, the banter has gone to a big degree on derby day... replaced by bitterness and hatred from both sets of supporters. Lately another glimpse of light  through another tragedy of the killing of little Blue Rhys Jones came to pass. It was at the Liverpool /Toulouse game that a man I respect and owe a pint to, Tony Barrett, had a great idea to show the world that tragedies like Rhys's death can overcome our local rivalry. I thought at the time Tony’s idea of playing Z-Cars before the game at Anfield could go horribly wrong but my faith in human spirit was rekindled thankfully. As Rhys's parents stood at the side of the pitch with their Blue scarves on,  our song Z-Cars was played and you could have heard a pin drop, such was the respectful silence for the little Blue. When Z cars finished the silence continued then applause before YNWA was sung.

A big round of applause to those reds there that night for both reds and Blues where united again but why does it take a tragedy these days? By the way, Tony Barrett is a red journalist but a good man in my book and loves Merseyside. 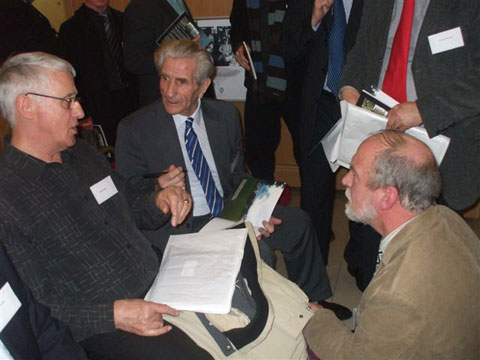 A fan pays homage to Derek and Dave

Over the years, 49 players have been on both books across the park, 39 of which actually played for both sides. Dave Hickson, present tonight, being one of the most famous players to cross the divide, but he saw sense and came back home. Always remember Dave’s famous saying “I'd break every bone playing for my team but I’d die for Everton”! We have had the most transfer dealings between both clubs, I never knew that.

Ben Chambers is widely recognized as the man now who brought football to Merseyside originally to keep his players fit after the cricket season. He came from the Last of the Summer Wine filming area, Sheply, where he is now laid to rest. But for Peter’s detective work, we would not have known that the grave of this man, to whom we owe so much for the formation of the  giants of  Merseyside, had become in disrepair and overgrown, with little known of the significance of the great man.

Peter wrote to Bill Kenwright and Rick Parry, telling of the state of the grave and giving an insight to the debt we owe Ben. An echo of the past was organised just like when John Houlding died, where both representatives of our teams went to Sheply. Graham Sharp and Brian Hall came plus two academy players from each side. The grave was fittingly restored and a service held at the graveside. Graeme Sharp said that it showed him the unity of years gone past maybe its time to restore this unity.

The book is a great read at a low cost, full of information and pictures, just go and buy it! Do you think we will ever get back to just banter and drop the bitterness?