The penultimate home game of the season and a good crowd fully expecting 3 points on a nice Sunday afternoon, Fulham with nothing to play for… hopefully not misplaced over-confidence! Heitinga absent with a suspected fractured ankle bone.

Everton made a very good start, Hibbert's cross from deep on the right volleyed against the base of Schwarzer's right-hand post off the left foot of Bilyaletdinov, a great effort from the Russian.  Pienaar, advancing into the area, went down a little too easily and made a half-hearted appeal… no penalty.

Mikel Arteta whipped over a cross from the Everton right and Tim Cahill got up high once again to glance a header wide of the Fulham goal with Yakubu lurking behind him.  After half an hour, and long spells of limited activity or excitement in a rather dull end-of-season walk in the park, some wonderment as to where a goal might come from.

Some better pressure, but a mistake from Baines with a really poor backpass, and Neviland clipped the ball over Howard: 0-1.  Oh deary me...  Everton responded but Yakubu got a great ball in to Cahill whose lame header was seriously disappointing.  What was all that crap we heard this week about needing to qualify for Europe?

The Yak was the next to fail to produce, on another chance that he scuffed at.  Arteta went down again after a clash of heads with Pantsil, and had to come off for some attention to a bad cut.  Fulham got another great chance with a nice flicked ball forward from Yutaka that Clint Dempsey should have buried past Howard.

Mikey Arteta reappeared after half-time, but Bily didn't... replaced by Victor Anichebe.  And it wasn't too long before Anichebe's weak downard header, after an overhead kick from Yakubu following a good chipped ball in from Arteta, led to a scruffy equalizing goal that Schwarzer scrambled desparateley to keep out but couldn't stop it bobbling over the line just inside the post.  Nice one, Victor! [Note: this was subequently creditted to Smalling as an own-goal]

Arteta put in a great ball for Cahill and his header looked good but Schwarzer got a hand to it.  Then Yakubu threatened, forcing another scrambled save from Schwazer.  Saha caame on for Neville — a second bold move from Moyes in a week! Pulling off one of his favourites... amazing!

Some good defending needed from Jagielka.  At the other end, Anichebe had a decent run and shot but straight at Schwarzer.  Greening then nearly gave Everton an own goal after a great cross from Baines, aken well by Arteta for another corner, with Yakubu and Anicehbe on the line. Another good corner played out to Saha whose header was blocked on the line.

Okaka got right through in on Howard but failed to score, shooting but not beating the Everton keeper.  Hodgson bought on David Elm for goalscorer Neviland with 12 mins left.  Later on, Arteta would have an opportunity from a free kick in the D but he could only drive it at Schwarzer.  Jose Baxter then replaced Yakubu.  Okaka replaced by Stoor for Fulham.

A good drive in from Baines that ended up in Shwartzer's arms as the board went up showing 3 mins of added time.... another last-minute winner? A great cross from Baies, Saha at the back post, a lovely downwad heaader ... wide of the post!!!

Last minute of added time and a gift: a high boot from Baird fouled Cahill... Penalty!  Arteta stepped up and smacked it home, sending Schwarzer the wrong way... Incredible!!!

Not the greatest of displays by the Barceloana of the North [cough] but the points in the bag... barely!

Everton play their penultimate home game of the season this Sunday as the surprise package of the Europa League this season, Fulham, come to Merseyside on the back of a protracted midweek journey to Germany and a hard-fought draw with Hamburg.

In addition to potential fatigue, Roy Hodgson's side will be further depleted by the loss of top scorer, Bobby Zamora, who has an Achilles injury that will see him watching this one from the sidelines.

The Blues, meanwhile, will again be without John Heitinga after it was revealed that the Dutchman suffered a hairine fracture to his ankle at Villa Park 10 days ago but apart from long-term absentees, Marouane Fellaini and Dan Gosling, he is David Moyes's only injury concern.

That means that Tim Cahill is almost certain to start his 200th match for Everton in all competitions since joining the club from Millwall in 2004 and in that time the Australian has cemented himself as one of the Blues' most important players. Though his injury-time goal at Blackburn last week may yet prove to have been in vain in terms of European qualification, it at least keeps Moyes's side in contention going into the final three games of the campaign.

Realistically, they will need to take maximum points from those last three fixtures — certainly achievable given their record against Fulham (the Cottagers haven't won a league game at Goodison since the incpetion of the Premier League), the precedent set by their win at Stoke last season and the fact that the final game will be against already-relegated Portsmouth — and hope that Aston Villa don't pick up more than two points and Liverpool don't earn more than three. 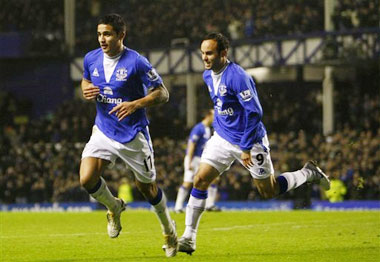 Tim Cahill: In line for his 200th start for Everton

The threat from the below is now just two-fold, with only Birmingham and Fulham themselves able to prevent the Blues from finishing in at least 8th place. In both cases, though, those clubs would need to win all three of their games and Everton would have to lose all three of theirs.