Phil Neville absent for the final game of the season, having had a knee operation yesterday; Tim Cahill also missing... injured or rested for the upcoming World Cup?  Not much to play for, other than pride, Everton already confirmed iin an 8th place finish, no longer the "Best of teh Rest" in the Premier League; the opposition today,Portsmouth, FA Cup finalists, already relegated. Steven Pienaar thankfully playing, dispelling the scurrilous rumours over his absence last week: he was injured.  A big crowd and a full Goodison Park to

Everton were very bright in the opening minutes, Hibbert, Arteta, all looking to attack, Louis Saha a glorious chance he put over the bar on a superb ball in from Baines.  Arteta was next in line, a mishit form Anichebe came back to him but he did not strike it well, allowing the keeper Ashdown to save. It took a whle for Portsmouth to even get a touch but finally they did attack after 8 mins.

The early spark faded a little and the impetous to attack with determination evaporated with it as the game settled into a somewhat predictable end-of-season affair. On 25 minutes, Piquioone got through the Everton defence and look set to score but Howard saved it at the second attempt. Arteta had a snapshot the keeper saw late but saved. Then it was Hibbert running in well but his ctback to Rodwell was driven wide.

Hibbert was putting in a fine perfomrance, getting behind the Portsmouth defence and winning a corner but it was not delivered well. However, Everton attacked again, gettiing another corner that Rodwell looked to head it but could not get it on target. Anichebe was the next to get into an excellent position and he turned nicely but shot into the side netting rather than across to the far side of goal. Just before the break and Pienaar played in Hibbert for yet another chance for the fullback to open his Everton account but the keeper saved it.

Second half and Pienaar needed treatment... then changed his boots while Yakubu came on for a very quiet (aka ineffective) Jack Rodwell. After the hour mark, Piqionne danced around Howard and O'Hara fired it in but somehow it was wrongly declared offside. Bilyaletdinov came on for Anichebe after the hour mark, but Everton still struggled to make the telling final ball... story of the goal. Meanwhile Piquionne and O'Hara combined well again and nearly scored again.

Osman had a good shot that was deflected over, with 10 mins left. Bily got a floick on it, and another corner as Heitinga waited to come on. Arteta swung in a better corner, and Saha headed it down well but it was cleared off the line by Mullins. Hietinga replaced Arteta for a nice ovation. Hibbert had another pop but it was just over.

The game into added time, dying on its feet, and Bilyaletdinov gets the ball on the edge of the area and he lashed it with fearsome power into the top corner of the net, the last kick of the season. Happy days at Goodison Park for the traditional Lap of Honour in fine spirit.

Everton round out the 2009/10 season with a meaningless home game with relegated Portsmouth having fallen just short of completing a remarkable recovery an awful start to the campaign that had some commentators talking in the autumn more in terms of a relegation dogfight than a battle for Europe.

As late as 20th December, the Blues were as low as 16th in the table but by that stage a run of form to rival the two best teams in the country was already underway and the fact that were it not for some disappointing draws from winning positions in recent weeks, David Moyes's side may well have sneaked into the Europa League.

As it is, Everton will finish 8th no matter what happens against a Pompey side whose minds will be squarely on the FA Cup Final against Chelsea next weekend. Instead of a last-ditch effort to overhaul Liverpool in 7th, the opportunity for which evaporated with a terrible display at Stoke last week, the Blues will use thie last match in front of the Goodison faithful to sign off in style and signal their intent to take the bulls by the horn next season and finally realise their enormous promise.

Captain Phil Neville will not be part of the season closer after undergoing corrective surgery on his knee this week, an operation that also rules out the slim possibility of an England call-up for this summer's World Cup Finals in South Africa. 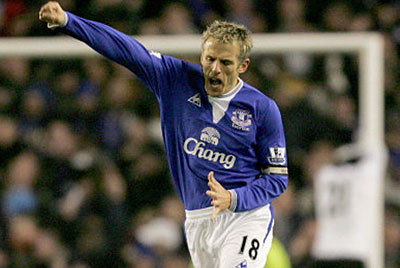 Phil Neville: Misses the season finale after undergoing surgery on his knee

John Heitinga, whose season also seemed to be over a few of weeks ago when he limped off at Villa Park with a suspected hairline fracture of his ankle, may make a surprise return as his replacement, though. Despite the risk to his own World Cup prospects, the Dutchman has vowed to do all he can to be passed fit to play against Pompey; if he is, he would be Neville's natural replacement in the central midfield holding role. Tony Hibbert would line up and right back.

Elsewhere in the side, it's up to Moyes how experimental he wants to get with his fringe players and those who did not play at the Britannia Stadium last weekend. Diniyar Bilyetdinov is one player who might thrive in a pressure-free game as he continues to build his confidence and Jack Rodwell is also due a start. Steven Pienaar is also expected to be fit after missing out at Stoke and should play in what Blues fans fervently hope won't be his last appearance inn a Blue shirt.