Lukaku makes it advantage Everton in first leg against Kyiv 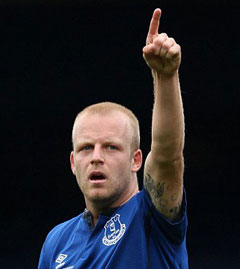 Everton will take a slender but potentially crucial lead to Ukraine next week after they came back from a goal down for the third match running in the Europa League to win the first leg against Dynamo Kyiv.

In an echo of the second leg against Young Boys of Bern in the previous round, Oleg Gusev's goal had put an expectant home crowd on edge when he swept home Andriy Yarmolenko's corner in the 14th-minute opener for the visitors.

The Blues had struggled to make any inroads into Sergei Rebrov's defence up to that point and it wasn't until the last 10 minutes of the half and the atmopshere inside Goodison Park becoming more and more agitated that they finally threatened Oleksandr Shovkovskiy's goal.

The Kyiv goalkeeper was almost responsible for gifting an equaliser to Lukaku when he was dispossessed outside of his area but the Belgian ignored the better-placed Phil Jagielka and went for glory himself with a miscued shot that dropped well wide of the target.

Lukaku came within inches of atoning for that moment a few minutes later when his free kick was tipped over the bar by Shovkovskiy but did so six minutes before the break with impressive determination to set up the equaliser for Naismith.

The striker held off three robust tackles before poking the ball forward to meet the Scot's over-lapping run and Naismith tucked a shot comfortably past the 'keeper to make it 1-1.

Everton needed to carry that intensity into the second half and they did but it would take another 37 minutes before they were able to translate their increasing superiority into another goal.

There were further chances for Seamus Coleman who steered a header of his own wide of the far post and a good opportunity for Gareth Barry when he was played in by Naismith but he scuffed a shot wide. And the Scot was almost in with 17 minutes to go off a one-two pass with Lukaku but he just couldn't dig the ball out of his feet to get a shot away before he was tackled.

The breakthrough arrived, however, just when the Blues seemed to be running out of steam. Leon Osman, a 74th-minute replacement for Ross Barkley, skipped to the byline and attempted to cut the ball back towards the six-yard box but his attempted cross was blocked by Danilo Silva's arm and referee Carlos Velasco pointed to the spot.

Lukaku stepped up, stutter-stepped to prompt Shovkovskiy into diving to his right and then stroke his shot down the middle with enough power that it found net off the 'keeper's foot.

The home side bayed for another goal to pad the lead which they nearly did but Osman couldn't get enough purchase on a header from Lukaku's cross.

Lukaku's goal makes him the top goalscorer in Europe in Everton's history and was just reward for a committed performance that typified his contributions in the Europa League this season.

It puts the Blues in the driver's seat for the second leg where an away goal of their own would put more pressure on Kyiv as they look to try and turn the tables back in their favour.