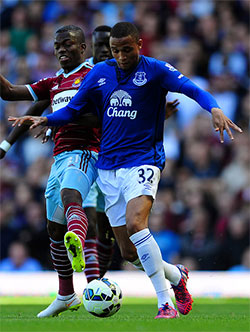 Brendan Galloway made his senior debut at left back in place of the injured Leighton Baines. (Dan Mullan/Getty Images)

Romelu Lukaku popped up with an injury-time winner as Everton came from behind to secure another dramatic victory at Upton Park.

The Belgian had laid on the equaliser for Leon Osman 25 minutes earlier and was in the right place to meet substitute Aiden McGeady's inviting cross to head home from close range.

A fairly uneventful game had come alive with a little over an hour gone when Stewart Downing collected Alex Song's neat pass and tucked a shot inside Tim Howard's post to give the Hammers the lead.

The Blues, who handed a debut to Brendan Galloway at left back instead of Luke Garbutt, had had the better of the first half but had again failed to create enough clear-cut chances to seriously threaten Adrian's goal. The Spaniard had pushed an early Osman shot wide and watched Lukaku blaze a left-footer over from 20 yards but it was often a familiar story of over-elaboration or a lack of cutting edge in the final third for Roberto Martinez's side.

Lukaku went close with a sweetly-struck free kick five minutes into the second half, his shot coming back off the stanchion and Ross Barkley spooned a left-foot shot over the bar but it was the home side who eventually succeeded in breaking the deadlock when Downing struck.

Everton responded with an increased urgency to going behind, however, and when Lukaku picked out Osman on the edge of the six-yard box with a cross from the right, the veteran midfielder took one touch and then scissor-kicked a half-volley beyond Adrian.

Alex Song headed a decent chance over and Adrian turned Lukaku's deflected shot behind for a corner in the closing stages but the game looked to be heading for a creditable point for both sides until the Belgian gave the ranks of travelling Blues massed behind the goal a late thrill as reward for their support.

McGeady, on for Aaron Lennon, wrong-footed his marker wide on the right and Lukaku peeled off his marker before stooping to bury his header, notching his 20th goal of the season and a second successive winner on West Ham's home turf.

The match had been notable because of the possibility of entry to Europe for one of these two sides via Uefa's Fair Play League but four Everton bookings on the day likely put paid to any lingering chance they had of edging past the Hammers into the qualifying slot.