Over the course of our proud history, Everton have had just 14 Africans on our books. Some became club legends, some gained unwanted infamy, and some (most actually!) were just downright useless. This is their story...

Firstly, if any bluenose nerds want to challenge themselves by naming all 14 from memory, go ahead. The full list is at the bottom. However, I will reveal two obscure names immediately because you'll almost certainly never guess them. One is Aristote Nsiala from the Democratic Republic of Congo who achieved his Everton success as an unused substitute during our unforgettable loss to BATE Borisov. His later career has taken him to Vietnam and Grimsby Town (which is more civilised?) as well as a solitary cap for his national team. Who knew that? The second is Ibrahim Said, an Egyptian central defender signed on loan in January 2003. Like Nsiala, he never played for us and was sent back to Al-Ahly having featured on our bench just once (at Spurs). Rumour has it that he made up an excuse (family illness) in order to be released, so he could play in a local derby back home. Regardless, he's definitely not one of Moyes' best buys. Despite this career setback, Said managed to pick up 72 caps for the Pharaohs, winning 2 African Cup of Nations tournaments.

The rest are more well known. Who can forget Ibrahima Bakayoko, the Ivorian striker signed for £4.5million by Walter Smith in 1998? 4 league goals followed, half of which came during a 2-1 victory over Blackburn at Ewood Park. Later successes include top scorer in the Greek 2nd Division in 2011 and an amazing 30 goals in 45 games for his country. What a fantastic player! Everton's first Ghanaian will also be remembered for just as long. Alex Nyarko played (badly) for just 2 seasons at Goodison and his transfer away was famously initiated by a fan running onto the pitch to hand him his own replica shirt. Bringing back happy memories? Quite amazingly, the midfielder is an Olympic medallist having picked up Bronze for his country during the 1992 Barcelona games. The mind boggles!

To be fair to Nyarko, at least he made more of an impression than his countryman Christian Atsu did last season (I'd already forgotten him) not to mention Lacina TraorÃ©, the 6"8 giant who scored a backheel after 3 minutes before promptly injuring himself for the remainder of his loan spell. Arouna KonÃ© will also inevitably join the list of flops once he gets off his camel, reacquainting himself with the likes of Magaye Gueye, who now plays in the Turkish second division only a year after being released. Don't ask me why but I always liked the man from Senegal. Maybe it was because he always seemed to play with a smile on his face as if he was relieved to be at the top level.

Finally, Samuel Eto'o (yes, he actually played for us!!!!!) joins the underwhelming gang of Evertonians from Africa. His highlights included scoring with his first touch in royal blue and a brace at Burnley, before unceremoniously leaving to Sampdoria for a higher wage. Obviously we were too much of a step up for him to succeed, having previously played for much smaller teams such as Barcelona, Real Madrid and Inter Milan.

Thankfully, I can safely say that the abject failures have now been covered which leaves just 5 decent players (in my opinion). Currently playing for us is Steven Pienaar, old and injury prone, but in his heyday a quality winger, and a poster boy for his nation over the course of his South African career. The Johannesburger will be remembered most fondly for an exquisite dink over Arsenal goalkeeper Almunia at the Emirates, a goal that should've given Moyes his only win away at Big 4 opposition. Anyone remember the Rosicky deflection?

The remaining four players are all Nigerian, and all of them have a special place in my Everton heart because I lived in that country for over four years. Firstly, there's Victor Anichebe, a contender for the fail list in many people's eyes but always one of my favourite players. Yes, he didn't try in some games, and yes, he didn't live up to his potential. However, he had all the skill set needed to be a good player and on his day could be fantastic. He also popped up with some very important goals, none more so than his strike against Liverpool for West Brom after latching on to a Kolo TourÃ© backpass. Hilarious.

One of Big Vic's strike partners at Everton was Yakubu, the man with no age. Having picked 22 as his number, the Yak scored 21 goals in his first season at the club, only one short of his target (and his age). The rest was downhill but the journeyman always chipped in and was famous for his eagle celebration which has now been displayed at Portsmouth, Middlesbrough, Reading, Leicester and Blackburn.

Next, we have Joseph Yobo, Everton's record African appearance holder having taken part in 253 matches in all competitions for the club. He also reached 101 caps for his country and was always dependable for us during his 7 seasons on Merseyside. The centre back even overcame the kidnapping of his brother, Norum, by Nigerian pirates in 2008. He also features in the photo at the bottom having combined with his national teammates for a goal at Villa. Sickeningly, he won his only domestic silverware after he left the club, for Fenerbache in Turkey.

At long last, we come to the big man himself, none other than Daniel "The Bull" Amokachi. Despite not making that much of an impact for Everton, Ammo will go down in our history as the man who set us on the way to the FA Cup in 1995, the most recent competition we've won. By famously bringing himself on to score 2 goals against Spurs, the long serving coach of Nigeria became an Everton legend. Nothing more needs to be said. In his short career he also won a Gold medal at the 1996 Olympics but had to retire young due to injury. As the only one to win a trophy he remains the most successful African ever to play for the Toffees. It may be fantasy, but, in the distant future, could another African challenge his record haul? Only time will tell. 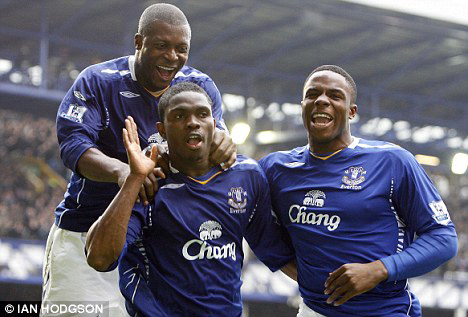