The date is 27 October 1883 and a Liverpool-based journalist has set out to cover a game of football that is to take place on a new enclosure that had recently been completed by the executive of Everton Football Club.

The need for this location had arisen because the number of people that were now assembling to watch them play had become too large to control at their previous home on Stanley Park. The spectators, around 2,000 in number, were swarming around the unguarded touchlines, spilling onto the pitch and disrupting the play.

These fortunate bands of football followers were also enjoying their entertainment free of charge. If the Everton club were going to move forward, then their followers would have to prove their loyalty by being prepared to pay for the privilege of watching them play football on an enclosed ground. Such a location was now ready for occupation and it opened, officially, with a representative match between the Liverpool & District FA and their counterparts from Walsall.

The local newspapers aided this new venture by informing their readers, without making reference to Priory Road, that they could reach the location on the... Trams that would terminate at the Cabbage Hall… and … The Red Bus Company would run a service from Exchange Railway Station directly to Arkles Lane.

This long forgotten transport company, which operated a horse drawn omnibus service, must have chosen to terminate their service at Arkles Lane because it was the nearest accessible point at which they could deliver their passengers to the new football ground. If this was so, then the enclosure stood not on Priory Lane but some way down the slope on its eastern edge. Alec Nesbit, who was interviewed in 1887, confirmed this fact. The former secretary, when questioned by a Bolton-based journalist, was quoted as saying… the first ground we secured was at Priory Road, Anfield; but it was not a success because it was too far out.

Our local newspaper man, nevertheless, managed to reach this “too far out” football ground and, as the play commenced, he reported that… there was goodly company flanking the carefully laid-out enclosure, which combined to give the ground a most picturesque and business-like aspect. He also remarked that during the course of the game, the ball was carried away down the slope. The occasion went off smoothly and, when the final whistle was heard, the game had ended in a draw. 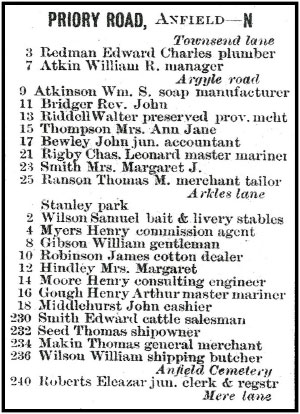 We are told by past historians that the Everton executive had approached a local resident, whose name was William Cruitt, and that he had consented to rent them a section of land near his home on Priory Road. Here they had erected their enclosure. The Gores index of Liverpool however, published in 1884, lists the occupants (as shown here) of Priory Road and, rather strangely, there is no person with the name of Cruitt. Everton Football Club had in fact rented the land off Mr Thomas Seed.

Nevertheless, they were to remain at this location for one season and then abruptly leave without informing the local pressman who had, during this time, been kind enough to cover their progress. Why did this happen? The reason may lie in the poor quality of their fixture list and not, as previously believed, because they were noisy neighbours. The association game in Liverpool was still in its infant stages and lagged some way behind certain other areas of the Red Rose County.

Blackburn Rovers had already reached the FA Cup Final, been beaten 1-0, and now their neighbours, Blackburn Olympic, were about to go one better and actually lift the trophy. The football teams of East Lancashire were “all in the news” and their exploits were well covered by the national newspapers. These were the teams everybody wanted to watch but Everton could not, as yet, attach them to their fixture list. The local football followers, it would appear, were not prepared to pay and watch such teams as Croston and Ormskirk and, consequently, the Everton club was struggling to survive. They had also been upstaged by their nearest rivals, Bootle.

The North Merseyside football club were now the winter tenants of a new sports enclosure on Hawthorne Road and had managed to secure attractive fixtures against touring sides from Scotland. The selection committee of the Liverpool & District FA had also chosen this location to stage their representative matches against sides from both Manchester and North Wales respectively. Everton did, however, have something to cheer about.

The club had fought their way through to the final of the Liverpool knockout and now faced the side which had eliminated Bootle, Earlestown. Everton beat them 1-0. The club, following this triumph, then played their final match at their new location against Burscough – and never returned there again. The reason why they left is open to conjecture.

One theory was put forward by the original Everton historian, Tom Keats, who, in 1928, published a book to celebrate the club's 50th anniversary. He cheerfully stated that… Presumably, the now familiar vociferous exuberance of the spectators disturbed the pastoral serenity Mr Cruitt's environment. If that was the case, well those early Everton fans certainly must have known how to support their team because, in 1884, Mr William Cruitt can be found living, not on Priory Road, but at 8 Wellington Road in Wavertree.

There is, however, a second theory as to why Everton left Priory Road and this appeared in an article that came to light in 1892. It was written in defence of John Houlding in a sports paper known as The Football Field and contained the following statement: I have a vivid recollection of the blank looks from the secretary and committee when the Everton club was requested, by Mr Cruitt, to clear out from their Priory Road ground leaving the goal posts ropes, stakes behind for rent arrears. So who was Mr Cruitt and why was Everton Football Club indebted to him? The answer may be found at the Liverpool Record Office.

William Crossley Cruitt was born in 1836 at Sawston in Cambridgeshire and first appeared in Liverpool during the 1880s where he listed his occupation as that of a Cattle Dealer. Around this time he married Annie Pettrie and, in the summer of 1884, moved in to 232 Priory Road. Mr Cruitt was now the Landlord of Everton Football Club. His Solicitor, no doubt, would have informed him that the tenants he had inherited, due to their lack of income, were “behind with the rent”. Mr Cruitt, clearly not a football fan, instructed him to oversee the process of evicting them. The debt was later paid and the enclosure was dismantled.  Its approximate location however, has never been identified but the following map might provide the answer: 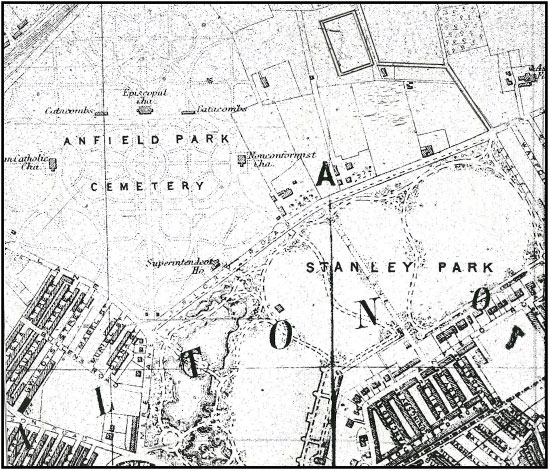 The ground, it would appear, was at the rear of Mr Cruitt's home and could only be reached on foot by walking along the undeveloped surface of Lower Arkles Lane. This thoroughfare, however, has completely vanished off the map.

Mr and Mrs Cruitt went on to have two children and the 1911 census finds them all, waited on by four servants, still living at 232 Priory Road. His former tenants were making their first visit to the new home of Nottingham Forest FC when, on 1 October 1898, William Crossley Cruitt died and was buried in Anfield Cemetery. He was 52 years old.