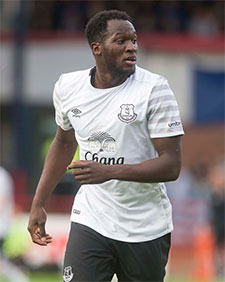 Romelu Lukaku struck for the eighth game in succession but Everton crashed to their third home defeat of the season
Everton slipped to their first defeat since October as the Premier League leaders exploited the shortcomings of Roberto Martinez's rearguard and held on to claim their first victory at Goodison Park for 30 years.

Two of the Premier League's most exciting attacks came head-to-head in a rain-soaked affair and, true to expectation, they served up five goals, albeit with two coming from the penalty spot thanks to rash challenges by Ramiro Funes Mori and Tim Howard.

Everton were the dominant side and looking the more likely but Ross Barkley spurned a great chance to open the scoring in the 25th minute when he snatched at a left-foot volley in front of goal, a miss he would come to rue less than two minutes later.

Funes Mori got caught the wrong side of Shinji Okazaki and then dragged the Japanese forward down in the penalty box, handing the in-form Riyad Mahrez the chance to put the Foxes ahead from the spot. Tim Howard guessed the right way but couldn't get a hand to the Algerian's kick.

The Blues were level five minutes later, however, as Romelu Lukaku rifled home just when it looked as though Leicester were going to survive a scramble in their own goalmouth. Barkley's first shot was saved by Kasper Schmeichel's foot and his second effort was headed off the line but Lukaku fired the rebound into the far corner to make it 1-1.

That goal, which marked the Belgian's seventh successive league game with a goal, the first by a Toffees striker since Bob Latchford 40 years ago, should have provided the platform from which Everton could go on and win the game but they found Leicester's dogged defending a consistent barrier and with nothing working for Gerard Deulofeu, chances were at a premium.

Instead, it was the visitors who took the lead and again it was via Mahrez from a penalty. The Algerian put Jamie Vardy in with a perfectly-weighted pass and when he tumbled under Howard's challenge, referee Jonathan Moss had little option but to point to the spot and book the American. Mahrez sent the goalkeeper the wrong way with a confident strike into the other side of the goal to his first penalty.

Five minutes after that, it was 3-1 and effectively game over. Seamus Coleman and Tom Cleverley tried to work a throw-in routine in a tight area in their own half and when the Irishman's attempted clearance struck Marc Albrighton's hands and fell invitingly for Vardy, the striker had time to tee up Okazaki to bury the ball past Howard.

Martinez made two belated changes in response, removing Arouna Kone and Deulofeu in favour of Kevin Mirallas and Aaron Lennon and the out-of-favour Belgian looked to have set up a grandstand finish with a goal two minutes from time. Barkley's exquisite heel-flick found Mirallas in space in the Leicester box and he struck a hard, low shot past Schmeichel to make it 3-2 heading into stoppage time.

Barkley would test the Foxes' keeper with one final chance in the dying moments but Everton's third home defeat of the season was sealed by the final whistle, but not before Howard had saved the home side from further embarrassment by foiling Ulloa at the death.