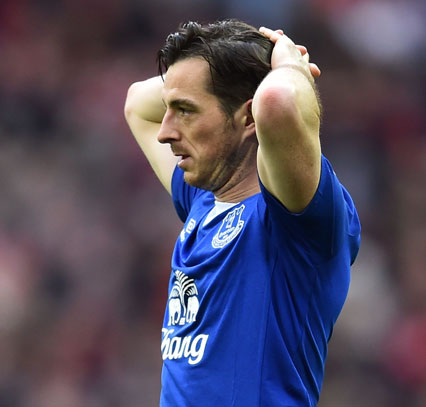 Everton fell at the penultimate hurdle of a cup competition for the second time this season, losing in the semi-finals of the FA Cup to Manchester United in heartbreaking fashion thanks to an injury-time goal by Anthony Martial.

An own goal by Chris Smalling, 20 minutes after David de Gea had palmed away Romelu Lukaku's penalty, with a quarter of an hour left looked like it had swung the pendulum in the Toffees' direction on the back of a stirring second-half fightback.

Trailing to Marouane Fellaini's strike, the consequence of a disorganised, dispirited and overly-defensive first-half performance from Roberto Martinez's side, Everton finally found their fight in the second period and looked capable of winning the game in the closing stages but were left ruing missed chances as extra time loomed.

Martinez's defence, carved open frequently before the break, was breached again catastrophically in the 93rd minute as Martial latched onto a ball prodded forward by Ander Herrera and he placed it past the stranded Joel Robles to win it for the Red Devils.

Martinez had expressed doubts before the game that Phil Jagielka would make the game because of a hamstring injury but the skipper was named in the starting line-up and put in an impressive display over the full 90-plus minutes. Muhamed Besic was deployed as an emergency right back due to Seamus Coleman's own hamstring problem, the Bosnian preferred to Bryan Oviedo who had a nightmare played out of position during Wednesday's calamitous Merseyside derby.

Darron Gibson, meanwhile, was recalled to deputise for the injured Gareth Barry and Tom Cleverley also came into the starting XI after his substitute's appearance at Anfield in midweek.

A pedestrian opening to the contest soon gave way to an increasingly open encounter but while it was United who were in control of the ball and the tempo who first threatened a goal through Martial's slaloming run, it was Everton who might have scored first when Lukaku picked up Robles's long kick forward but was let down by his touch that took him wider than he would have liked his shot was cleared off the line by the retreating Wayne Rooney.

Robles made a great one-on-one save to deny Jessie Lingard at one end before Lukaku found himself bearing down on De Gea's goal again but the Spaniard foiled him from a tight angle.

Despite those two good openings, it was Louis van Gaal's men playing the more purposeful, controlled football and after one incisive move ended with Martial ballooning over the bar, Fellaini nodded the ball back across goal to Lingard a few minutes later but his side-foot volley was too close to Robles.

United's targeting of Besic in an unfamiliar fullback role proved telling 11 minutes before the interval. Marcus Rashford was sent to the byline by a neat pass inside and his cut-back picked out Fellaini in the centre to bobble the ball home and make it 1-0.

The intensity required of the Blues by the occasion belatedly arrived early in the second period, although Lingard could have doubled the advantage with the first chance of the half but shot off Martial's back-heel was tame.

A minute later, Everton kicked up the tempo with two-vs-two counter-attack that ended with Aaron Lennon cross for Barkley who attempted to dribble outside Tim Fosu-Mensah but went down under the young Dutchman's challenge, prompting referee Anthony Taylor to point to the penalty spot after a moment or two's deliberation.

Perhaps because of his saved penalty by Dea Gea at Old Trafford last season, Lukaku, not Leighton Baines, took the resulting spot-kick but while he hit it well enough, the Belgian saw the ‘keeper guess right and push his shot away.

Roared on by their ever-more raucous faithful, however, Everton responded to the set-back with more pressure on United's back line. Cleverley sliced Lennon's wide at the back post, James McCarthy volleyed into the ground and Lukaku headed over from close range unaware that Besic was better placed behind him to convert Cleverley's cross.

All of that gathering momentum was almost negated back at the other end when Fellaini popped up a couple of yards from goal but, unseen by the referee, his goal-bound shot was kept out by Jagielka near the line.

10 minutes later, after Gerard Deulofeu had come on for Lennon, Everton were level. The Spanish winger put a low cross into the danger zone searching out Lukaku, Smalling got caught into two minds over which foot to use to clear and ended up diverting the ball past his own goalkeeper to ignite the Blues fans and players in celebration.

Soon afterwards, Deulofeu forced a one-handed stop from De Gea that he almost pushed into Lukaku's path, Lukaku mis-judged a bouncing ball that sat up for him right in front of goal and he headed wide, and Deulofeu finished an incisive Everton move by slipping in Lukaku but Fellaini got back to make a last-ditch saving tackle.

The match was heading for an extra 30 minutes that would have been punishing on the tired limbs on display but Van Gaal's charges put one last decisive move together with 92 minutes on the clock that ended with Martial winning it in dramatic fashion and sending United into the final.

Everton, meanwhile, were left to contemplate what is effectively the end of their season, one that prolongs the club's trophy drought but calls into very serious question Martinez's continuing stewardship of the team.

Two results in the space of four days that he admitted would define the Toffees' season have ended in defeat and the tide among Evertonians has emphatically turned against him to the point where it seems his position as manager is untenable.