Cruel end to a brave comeback 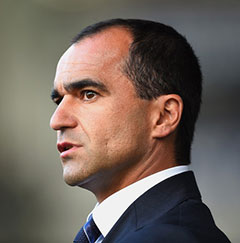 After another poor first half and then a missed penalty, the players seemed to throw out the Roberto Martinez gameplan and came close with a spirited comeback.

It looked like a reprise of Woeful Wednesday as Fellaini scored with Man Utd dominant in the first half. But Everton won a questionable penalty that De Gea saved despite a very strong shot from Lukaku, and the Blues finally woke up, giving it a good game but still not really doing damage until a Deulofeu cross was turned in by Smalling. A strong comeback by the Blues almost came off until a sharp move cut through the Blues defence and Martial scored in the second minute of added time.

After the most traumatic of weeks for Evertonians, in a season of increasingly desperate trauma, some respite to the abysmal Premier League form was hopefully on offer at Wembley Stadium this afternoon. Despite a massive groundswell of derision toward the manager, many calling for him to be sacked before this pivotal game, Roberto Martinez remained in charge of his clearly unhappy retinue.

But today should have been more about the players and the fans, with Martinez having to cobble together a line-up that lacked Gareth Barry, possibly out for the rest of the season, Seamus Coleman also suffering with hamstring issues, and Ramiro Funes Mori, red-carded on that horrific night at Anfield.

Defender Matthew Pennington came into the squad as cover after being recalled from his loan spell at Walsall, with Tony Hibbert also on the bench. Captain Phil Jagielka was declared fit despite his current hamstring damage, with some uncertainty over who would play right back from four defensive midfielders in Gibson Cleverley, Besic, and McCarthy. Could the Blues line-up 4-3-3? Or 3-4-3?

Manchester United, with Rooney and Fellaini on the field, Martial and Rashford in attack, kicked off to get the game going, with Barkley running hard at Blind but not winning he ball as Man Utd played around a bit before hoofing it forward to Fellaini, to no avail, but the Reds controlling early play and slowing things down to a walking pace.

The Blues got a little possession but did nothing with it and a throw-in led to Martial galloping forward and winning a corner off superb defending by Stones. Robles collected, launched high to Lukaku who got past Blind but a horrendous first touch pushed him wide and allowed Wayne Rooney to get back on the line and head the ball away... hopeless really from Lukaku.

That at least livened up a rather sluggish start. Martial almost got past Lennon at right back but was body-checked. The free-kick from Rooney was glanced wide by Rojo. The Reds were clearly the better side despite that missed effort by Lukaku but the Blues did advance, Barkley with a low shot in on De Gea.

Rashord and Lingard got behind the Blue line and Robles was sharply out to block a certain goal, and Lingard then got on the end of a great diagonal ball but Robles was again out fast to snuff out the danger. But the Blues were poor trying to move the ball out of their half, giving possession up cheaply and Utd were soon on the attack, Besic halting the move with a good tackle.

Martial again got past Besic down the Everton right, Besic blocking out for another Utd corner taken by Blind deep, but a free-kick was ordered for Rojo pushing Jagielka. Another long ball to Lukaku and he did well to get ahead but his horrible horrible first touch, chest off knee, again pushed him far too wide and all he could do was pass the ball back to De Gea. A second golden chance squandered.

Lingard had the beating of Gibson but Baines was across sharply for another corner, taken short. Pressure on the Blues continued, Besic finally clearing, but only brief respite before Martial got on the end of another defense-splitting ball that was lashed over Robles and the Everton goal.

It was all one-way traffic, Fellaini heading back for Rashford but Robles saved the Blues again. Barkley tried to break out and was fouled. Baines got forward and crossed but straight to De Gea. The Blues continued to struggle for meaningful possession, exemplified by Stones playing forward to Lukaku's feet, the Big Man unable to make a telling pass.

Barkley finally probed forward but was immediately swarmed by three red defenders and it came to nought, while Utd surged forward again. But the Blues were getting a little more of the play... yet still not really threatening when they did have it at their feet. At the other end, Robles saved a weak shot from Rooney before Martial skipped past Besic and along the byeline, cutting it back to Fellaini who had an easy task even mis-hitting the ball as he converted high into the net past Robles. It had been coming...

The Blues tried to respond but were repelled on the edge of the area, Barkley's shot blocked, and the Reds were soon up the other end, winning a corner, as Everton were being increasingly outclassed by the sharper play of the Red Devils.

More slow, ponderous build-up play saw the ball again launched toward Lukaku's head and the lay-off just not sticking. Everton were a little more competitive in midfield and won a free-kick that was only taken short, but possession play was easily countered by a solid Reds defence that kept them well away from De Gea's goal.

Everton were simply not clicking, and in grave danger of collapsing as they had on Wednesday night, such was the paucity of their play, with all the bad habits created by Martinez's hopeless coaching coming to the fore as they went in after one added minute.

The Blues kicked off after the break, and showed a little more forward intent, Lennon looking for a free-kick as he was blocked off the ball at the byeline. More slow build-up play eneded with a forward ball played to Lukaku the tree-trunk that bounced back high and to an opposition player.

But the Blues did put something together, winning a free-kick wide left off Martial but headed away by Fellaini. Besic, now playing left-back(?) almost got caught and was saved by a handball call. Cleverley had a chance to release Barkley but his pass was impossible to control. Man Utd worked the ball forward and created a great chance for Lingard that he thankfully screwed wide.

Martial was fouled by Besic but the free-kick was defended away but a swift attack by Everton, Lukaku doing well, Barkley and Lennon combing, and Barkley getting a rather fortunate penalty, the defender just getting a touckh on the ball. Lukaku lashed the peknalty hard but De Gea had it down perfectly with a tremendous one-handed save to deny Everton an equalizer, no matter how unjust it might have been.

Everton got a good looking free-kick that Barkley did well to get over the wall... too well as De Gea had time to save again. But at least Everton were attacking, Lennon crossing to Cleverley coming in at the far post but his control was poor as he felt a touch off Lingard, but this not called as a penalty. .

Everton attacked again and again, as if they had finally found a new script, Barkley trying to curl a shot in but winning a corner that came to nothing. A high cross was too high for Lukaku, who should have left it to Besic coming in behind him, and another chance went begging.

At the other end, it looks like Fellaini would score from close range but Jagileka threw himself down in front of Robles and stopped it with his arm, unseen. Blues attacked with gusto, Lukaku heading over, then swinging in a fierce ball that Cleverley could not convert, then a corner swung in too deep.

Barkley picked the ball up and looked o run at the Reds but an interception dispossessed him and Deulofeu came on for Lennon with 20 minutes left. Deulofeu got a run but played the ball away not once but twice. He picked the ball up again on the left side later and passes it straight to a red shirt, creating another strong Man Utd attack down the Everton left.

The Blues tempo had flagged a little but the next attack finally saw a remarkable end product, Deulofeu pausing before firing in a cross that Lukaku had no chance of reaching because Smalling did his job for him, slicing the ball very nicely into the United net, Blues fans erupt!

A great attack don the left saw Barkley release Deulofeu but his cross didn't reach Lukakau as De Gea made a great interception. Baines then whipped in a fantastic ball that was just too high again for Lukaku. A counter by United won a couple of corners after a css went through everyone.

A fantastic counter attack, Deulofeu, Barkley and Lukaku but somehow they contrived not score when i seemed the easiest option, Fellaini getting the crucial interceptions the pace of the match reached fantastic new heights with seven minutes left of the 90. At the other end, another wicked low cross looked lie an open opportunity. Man Utd had a strong spell of attacks, Rooney playing in Rashford, Stones messing up but Jagielka rescuing him.

Hopefully the Blues had not shot their bolt but the final 10 mins were dominated by Man Utd, who switched Fellaini for Herrera. It was desperate defending at times but the Blues broke, Barkley unable to get away from Herrera, who rugby-tackled him, Barkley tumbling and kicking out a little in annoyance: yellow card. Nothing came of the free-kick and Utd attacked again, winning a corner as Gibson went down qwith cramp, 3 mins of added time shown as Robles catches the corner with confidence. Lukaku went on De Gea as he tried to clear, but only gave them a goal kick.

But seemingly from nothing, quick interpassing, the bounce beating Jagielka and Martial somehow wriggled through the Blue line and lashed the ball easily past Robles to win the game in added time. One final attack by the Blues before the whistle blew and that was it. The Everton players had put a great effort for 35 minutes after a pretty poor start that lasted all of 55 minutes. Not the capitulation many expected in the end, but crucial chances missed mean our name was not on the cup after all.