McGeady out in the cold but could yet make Euro2016 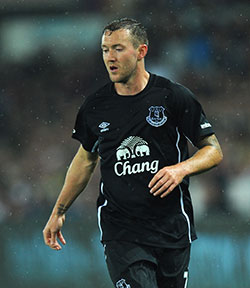 Aiden McGeady's season at club level may have hit rock bottom but he still has hopes of being involved in next month's European Championships thanks to the enduring faith of Republic of Ireland boss, Martin O'Neill.

The Irish winger was signed by Roberto Martinez in a cut-price deal with Spartak Moscow in January 2014 but two years later he was forced to drop down a division to the Championship with Sheffield Wednesday in search of first-team football.

The Russian club had acquired him in 2009 for what was then an eye-watering £9m based on his success with Celtic and while things hadn't gone entirely to plan for the Scottish-born Ireland international, his move to Goodison Park gave him the opportunity to prove himself on the Premier League stage at the peak of his career.

Facing competition from the likes of Gerard Deulofeu, Kevin Mirallas, Christian Atsu, Steven Pienaar and Aaron Lennon at various times in his Everton career, McGeady was never able to hold down a regular starting berth and lost his place in the first team squad completely last autumn, with the 30-year-old later admitting that Martinez had informed him he was no longer part of his plans after a poor showing in the Capital One Cup tie at Barnsley.

Initially resistant to move down to the Championship, McGeady ultimately had no choice if he wanted to remain in the thoughts of O'Neill for Euro2016. However, while it had been expected that a player with his talent and experience would be a vital part of the Owls' promotion push, he won't be in their squad at all for the Championship playoff final at Wembley this weekend.

That has surprised his international manager who will be giving McGeady and players like his Everton club mate Darron Gibson extra training sessions as they prepare for Friday's friendly against the Netherlands.

“Yes, yes, I am [surprised],” O'Neill said in the Irish Examiner. “He made the effort to go out on loan in January and that was commendable, obviously thinking about the Euros.

“I could understand the manager not starting him in some games, or playing him and taking him off, because maybe he did not think his match fitness was really there. But, for whatever reason, he wasn't involved in the second (semi-final) leg at Brighton.

“Then the manager told him he wouldn't be involved in the final.”

Having fallen out of favour with Martinez, it was almost certain that McGeady would have moved on from Everton this summer had the Catalan remained in charge. The Paisley-born winger will probably await the appointment of his successor with interest but it's unlikely he will have a future at Goodison, despite having two years yet to run on his current contract.


Mike Moore
1 Posted 24/05/2016 at 07:06:35
One trick pony, simply isn't good enough. No surprise to me that Sheff Wed have realised that too.
Anto Byrne
3 Posted 24/05/2016 at 08:34:55
Hope he gets some form in the euros. Builds up some confidence gets a few games to impress. Personally I thought he would make a better full back as had pace was defensively minded and could tackle and win the ball cleanly. Just seemed his game went to shit in the last third. Definitely has talent but after his big money moves his bank account is probably all that matters.

How many of us would like to be paid to play football. Geez we had to pay to play on a cold wet windy winters day in January for 4th division Sunday League pub team. Lol great days. We won the Shell Cup 1.0 from a 40yard screamer I think we had a Clattenburg on our side that day.

O'Neill loves him so he'll definitely be on the plane.

It's about time we had another thread about McGeady anyway, considering how high profile he is.

Maybe one of the tests ALL the players must do before signing and subsequently before the start of each season for all signed players, is to run 10 miles in under 50 minutes. This would have ruled out Mcgeady and Niasse from signing for us and would have saved us over £20M (transfer fees and wages)

Mick Davies
20 Posted 24/05/2016 at 19:53:29
Showed some good touches in his early days here - like the the pass at Fulham to Kev, the goal at Leicester and the cross against Cardiff to win the game, but he just looks like a lazy sod and we've got enough of them already.
Maybe another loan next season and if he doesn't work to get it right, at 30, it might be his last chance to use some of his undoubted talent. Money in the bank alone isn't the same as a cabinet with medals in too
Tom Bowers
21 Posted 24/05/2016 at 20:26:10
McGeady is one of those wing players with bags of talent but oh so inconsistent much like Sterling, Delboy, and Oxlade-Chamberlain to name but a few.
It's one thing to have a burst of speed and some trickery but useless if the end product is wayward.
I remember an old Everton winger(Tommy Ring) who's career ended with a broken leg and who's crosses were just amazingly accurate almost every time and he didn't have great speed.
Mick Davies
22 Posted 24/05/2016 at 20:54:34
Tom @ 21, Tommy Ring was a bit before my time but Dave Thomas must be the best crosser of a ball I've seen in my time . . was there any comparison?
Steve Green
23 Posted 24/05/2016 at 21:11:21
Whilst Dave Thomas was the best crosser I have witnessed at Everton (aided and abetted by a centre forward actually wanting to get on the end of them...aka Big Bob) I would have to say that Ronnie Goodlass couldn't half cross a ball as well and land it on a sixpence.

Anyone see the two corners that Stubbsy's boy put in during the closing minutes at Hampden on Saturday when getting beat and needing something brilliant... great... or maybe just proper!!!

Get him down to Finch Farm... now! If he's not good enough to play at our level, at least he can show them how and more importantly where a ball needs to be crossed. Two great crosses equals two headed goals.

Maybe one of the tests ALL the players must do before signing and subsequently before the start of each season for all signed players, is to run 10 miles in under 50 minutes. This would have ruled out Mcgeady and Niasse from signing for us and would have saved us over £20M (transfer fees and wages)

(Well, Martinez, you started it!)

Can still see him now, socks rolled down to his ankles, and a big grin on Bobs face as Thomas shaped to cross the ball.

Mick Davies
31 Posted 26/05/2016 at 17:00:27
On the subject of the ROI; Looks like McCarthy was playing with an injury for us in the last few games according to MON. How many unfit players did Martinez use when he had plenty of replacements? He was alleged to be a qualified physio yet threatened the careers of his players and probably lost us many points by persisting with crocks . . good riddance and I hope the players appreciate our 'true-blue- chairman for allowing this to go on, then cancelling their night out

And if Frank Thomas' 10 miles in 50 minutes becomes the standard, that list will include the entire roster.
With a roster packed with Kenyans in-bound.