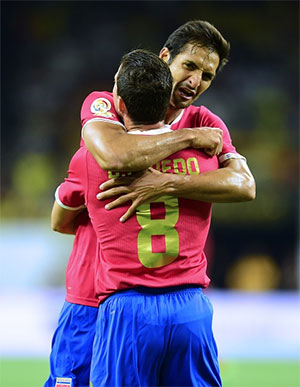 Borges and Oviedo embrace after the pair combined for what proved to be the winning goal
Bryan Oviedo stepped off the bench to play a big role in Costa Rica's third and ultimately decisive goal last night as they beat Colombia 3-2 and handed the United States top spot in Copa America Group A.

The Everton defender had been an unused substitute in his country's first two games, a draw against Paraguay and a heavy 4-0 defeat to the USA.

He was given his chance as a half-time introduction in Houston, however, deployed in the right-back role in which he struggled at times for the Blues this past season.

But when he popped up on the flank on the overlap in the 58th minute and centred for Borges, the latter swept home to make it 3-1.

Costa Rica had got on the board early when Johan Venegas curled home a stunning shot from 20 yards in only the second minute.

Colombia levelled just four minutes later though Frank Fabra but the same player ended up bundling the ball into the net at the other as he tried to deal with Venegas's wicked cross.

José Pékerman threw his star man, James Rodriguez on to try and change the game at the break but they ended up chasing the game after Borges' goal.

Marlos Moreno pulled another back for the South Americans with 17 minutes left but the Costa Ricans held firm, with Oviedo intervening in injury time to deny Rodriguez.

The result means that the US, who edged Paraguay in a feisty affair in Philadelphia in which Deandre Yedlin was sent off early in the second half for two yellow cards in less than a minute, top the group and could therefore avoid Brazil in the quarter finals, depending on results in Group B today.

Remember that before his terrible injury many were advocating selling Baines as Oviedo was playing as good as / better than him. If he can get back to that form then he will be an asset either as a regular player or for future sale.

Tony Draper
3 Posted 12/06/2016 at 11:23:21
Eric @2.
Spot on. Bryan had a truly terrible multiple break to his leg. To ever play again is close to miraculous, yet he's always maintained his positive outlook.

I want players like that in our beloved "Royal Blue Jersey", players who don't let a setback prevent them.

He's still short of real gametime in his true position. Unlike some others Bryan genuinely deserves our patience and support. Then after (lets say) another season it's clear that he's not going to make the grade, let him go with all our respect.

"Grabs an assist"? Really, desperate for headlines or what?

Outstanding contribution to the close season dialogue that one mate, looking forward to your column. Must dash, I'm trying to catch your appearance in the world paint drying championships!

Brian Cleveland
12 Posted 12/06/2016 at 17:17:48
The first thing he did he was make an excellent tackle over on the left when a Colombian forward had broken into the box, wrapped his foot around from the wrong side and won it absolutely cleanly when it would have been easy to give away a penalty.

After that he was on the right all the time and the assist was a nice pull back with his right. Defensively there were moments when he did look like he was a little short of sharpness, but understandable given he has been a bit in and out of the team all season.

His attitude can never doubted though...

One thing to remember about the Colombian team is that they changed the entire team as they had already qualified, but Costa Rica did play an awful lot better than they did against the US. Mistake by Colombia really given that they are now most likely going to face Brazil in the next round. Bad underestimation of their opponents.