Alex Lochhead, the Everton Wing Half from Neilston

Many Everton players over the years have been asked to make their debut in some tough “must win” situations but the first of these must surely be a young Scotsman who arrived in Liverpool during the November of 1891 at a time when his new club were challenging to take the football league championship away from Preston North End. Alexander Lochhead had been born on 27th June, 1865 in the rural community of Neilson in Renfrewshire where he began his football career playing for the village team.

His style of play soon caught the eye of a talent Scout who invited the young half back to join the football players from the Third Lanarkshire Rifle Volunteers who were based in Glasgow. The club, following their formation in 1874, had first played their home matches on the parade ground before moving to the first Cathkin Park in 1875.

In September 1888, the Volunteers began a long and arduous cup run that was to bring them to the final. Lochhead was missing from the line up when they disposed in round three of Queens Park which in turn brought them in to conflict with the Abercorn club from Paisley. The two sides proved to be evenly matched but it was the Riflemen who eventually emerged victories. Alex Lochhead, however, had been involved during the tie in a fight with an opponent and the two men found themselves in a court case that found its way in to the newspapers on both sides of the border…

On Saturday Abercorn and 3rd L V R met for the 4th time to decide their tie for the Scottish Cup at Ibrox. On this occasion, Robert Buchannan, Engineer, Tynedoch Street, Greenock of the Abercorn and Alexander Lochead, Main Street, Barrhead of the 3rd had a stand-up fight and the referee, Mr Robert McHoul, ordered both men to leave the field. They appeared at Govan Police Court on Friday the 28th December. Bailie Mark who presided, charged them with a breach of the peace and after trail and pleading they were sentenced. Buchannan - who seemed to be the assailant in the first instance – was offered 33 days’ imprisonment or a fine of 2 Guinea’s. Lochhead – 25 days’ imprisonment or a fine of 30s. (Sporting Life)


Alex Lochhead must have agreed to pay the fine because on the 2nd of February 1889 he was selected to represent the Riflemen in the Scottish Cup final where their opponents were to be the latest acquisition to the local football circuit, Glasgow Celtic. The game caught the imagination of the local population so the ruling executive decided to double the admission price to one shilling. This did not deter the fans and around 19,000 of them, the largest crowd to yet assemble in Scotland, packed the new home of the Queens Park club at Hampden Park where they paid a record sum of £920 in gate receipts. The event however, was to be spoilt by the weather.

The light snow shower that was falling on the morning of the match had increased considerably, covering the playing surface to depth of three inches when the kick off time arrived. The players and officials met in the centre of the playing area where all concerned agreed that it was unsuitable to stage the game.

It was then decided that it would be played as a friendly and the outcome, regardless on the result, would be put before SFA committee for decision. (Whether the spectators were aware of this fact the newspapers do not make abundantly clear.) The newcomers started the game strongly as both teams struggled with the conditions. The Volunteers however, slowly took control and, with goals from Marshall, Oswald Hannah, won the game 3-0.

The SFA committee then met on Monday evening and, after consultation with the match officials, declared the result to be invalid and ordered the game to be re-played at Hampden Park the next Saturday where the same price of admission was charged at the gate. One third of the money went to the SFA committee and one third each to two clubs participating while all the extra money taken from the people who transferred on to the two grandstands went to Queens Park Football Club. There were no changes in either side from the previous Saturday when the play commenced. The 3rd L V R won the trophy, for the first time in their history, in a closely contested game by 2 goals to 1 and Alex Lochhead received his SFA Cup winners medal.

The form shown by certain members of the Riflemen caught the eye of Scottish selectors and six of their side, Lochhead amongst them, were chosen to represent Scotland, 15-4-1889, in the forthcoming international match against Wales. It was to be his one and only appearance . The game, which took place on the Racecourse Ground at Wrexham, ended in a 0-0 draw.

Alex Lochhead was married that summer and settled with his Aberdeen-born wife Barbara at 3 Main Street in the Renfrewshire town of Barrhead where their first child born. He continued to play football with Volunteers until February 1891 when he accepted a down payment of £130, plus a wage of £3 a week, to join an Everton side who were just one game away from becoming Football League champions. He made his debut on 21st February1891 in a friendly game against Walsall Town Swifts, played in a benefit match against Darwen, and was then thrust in to the half back line for the final game of the league campaign against Burnley at Turf Moor. Everton lost the game 3-2 but became champions when it was discovered that Preston North End had also lost at Sunderland.

Alex Lochhead, along with goalkeeper John Angus, are reported to have been at home in their lodging at 6 Skerries Road when the 1901 census was taken on the 5th of April where he confirmed that he had been born in Neilston. With the Football League fixtures now having all been honoured the Everton board, for a guaranteed sum of £100, finally persuaded the famous Queens Park club to come down and play an exhibition match at Anfield and Lochhead was selected to take part. Over 12,000 people, despite the large price increase, watched the sides play out a 1-1 draw.

The Scot then took part in the Liverpool Senior Cup final where he scored one of the goals in a 4-1victory over Bootle and was presented with a Gold Medal at the end-of-season celebration in Liverpool. It is likely that Lochhead then spent the summer back in Scotland where he would have heard the dreadful news that his fellow lodger John Angus had contacted Typhoid Fever at the family home in Scotland and had died there on the 17th of August.

Lochhead returned to Liverpool but was not selected to play in the opening game of the new campaign, away at West Bromwich Albion (where Everton lost 4-1) but returned for the opening home game against Football League newcomers Darwen where Everton won by 5 goals to 3. He then took part in games against Blackburn Rovers and Accrington but was dropped following a 2-1 defeat at league leaders Sunderland. 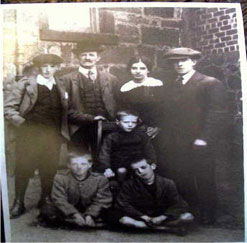 Lochhead played his sixth and final Football League game for Everton on November the 21st in a disastrous 5-1 away against Wolverhampton Wanderers and then lost his place in the first X1 to fellow Scotsman Hope Robertson. He then returned to the reserve side and was not retained by the club at the end of season. Alex Lochhead then return to Scotland where he played for 3rd L V R and Clyde until he retired from the game. He spent the rest of his days working as a Cabinet Maker and living, with his wife Barbara, at on Main Street, Barrhead where they raised the family who are pictured here with their Father. Alexander Lochhead, a former wing half with Everton, was living at this address when he passed away on the 9th of January 1939 and was buried at Neilston Cemetery.