Koeman acknowledges the need to improve 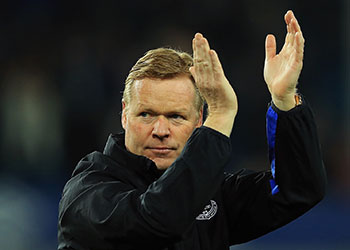 Ronald Koeman expressed his happiness at Everton's progress to the playfoff round of the Europa League qualifiers but admitted his team lacked fluidity going forward in the second leg against Ružomberok.

The Toffees matched their score from the first leg by recording a 1-0 win in Slovakia thanks to substitute Dominic Calvert-Lewin. The striker came off the bench to make the difference for Ronald Koeman's side, who had again looked ponderous and disjointed, with a composed finish 10 minutes from time.

The result meant that Everton won the tie 2-0 on aggregate and are in the "hat" for tomorrow's draw but the manager knows his charges must keep improving before the Premier League season kicks off in a little over a week's time.

“I think we were better defensively tonight than we were last week,” Koeman told evertonfc.com. “But we know that we can and need to improve in our ball possession. We had a lot of space for one of the two centre-backs in the first half and we need to dribble in and create more than we did.

"It was a really physical game and 90 minutes that the players need in pre-season. We are through to the next round, the job is done and I'm really happy.

"The Europa League has always been important for me. I like to be in Europe - it's important for our experience. It's good for the club, the players and the fans. It's not easy to reach the group stages but we will do everything to get there.”