Keane and Jagielka could miss next two games 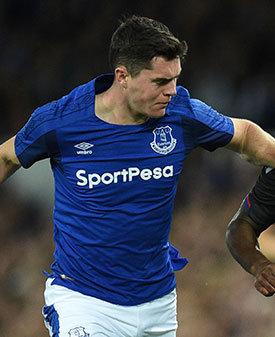 Everton look set to be without both Michael Keane and Phil Jagielka for both the Apollon Limassol and Burnley games because of injury.

The duo missed yesterday's 2-1 win over Bournemouth and Ronald Koeman says it's possible neither player will feature until after the upcoming international break.

Keane suffered a gash to his foot that will rule him out of Thursday's Europa League clash with the Cypriots while Jagielka has a minor hamstring complaint.

"It's not so bad," Koeman said of Keane's injury yesterday. "His foot was a little bit open and the doctor said he will maybe reach next Sunday but he will be doubtful for Thursday.

"I think he cannot start on Thursday but maybe yes on Sunday.

"Jagielka has a slight hamstring problem and will be one week to 10 days out and we will not take that risk before the international break.

"We did not have seven normally starting players today so it is even more of a compliment to the players who played today for what they showed."

I don't see them playing together, Rooney slows the game down (still a very skilful player) whereas Sigurdsson is more of a fast pace player.

I said it in a previous post: Do we have a Gerrard/Lampard situation with Rooney and Sigurdsson? However, nobody agreed or disagreed with me on that point?

Brian Porter
7 Posted 25/09/2017 at 11:10:29
"Normally starting players?" So in other words, Koeman is effectively saying he will revert to type as soon as all his personal favourites are available again, precisely the attitude towards team selection that did for Martinez in the end.

We have gone from one dumb manager to another. I thought he said last season, that every position in the team was up for grabs by the players who were performing the best at that moment in time. Another lie, Ronald?

Do you really think he's deliberately making a mess of things? No, he's principled and has 'his way' of doings things, but isn't that single minded attitude the reason people get into positions like his?

You could say the exact same thing about all top managers – and by 'top manager' I refer to every single one of them in the Premier League.

I quite like the guy, despite our recent results and perceived treatment of Niasse. Reading Koeman's comments on the Niasse thing, I kinda got what he was saying.

He's Everton manager, and while he is, I'll still back him. You can't blame him for us not signing a striker either – it's a bigger issue than just Ronald Koeman.

He made one critical error for the goal. There was another error we got away with, but everything else he did was very good and he brought the ball out of defence well, but perhaps a little too well as he looked to get forward, and perhaps he shouldn't be doing that whilst looking to stake his claim to be a centre half. Instead, he should be showing he can do the basics and then build upon that.

Very much a mixed performance, but it was very promising and he clearly can do the job and do it well, he just needs some experience at the top level. Surely, he must start on Thursday.

It's worse than a Lampard/Gerard conundrum – amazed that the BBC panel had them as the all time Premier League central midfield: idiots.

We have three No 10s (Sigurdsson, Rooney and Klaassen) and almost no wingers - –or none that are picked to play. We should have chosen between Sigurdsson and Klaassen and used the savings on a left wing back. Amazingly, we are picking all three and have no width. I'd give Klaassen the Europe games, and Sigurdsson or Rooney the Premier League games.

Stranger things have happened. Oumar never gave up, perhaps Ross should sit down with him!

We needed Niasse because of a lack of alternatives. We'd need a plane crash (Heaven Forbid!) for the same to be true for Barkley.

Ross should look at Oumar on the pitch in not giving up, as well as off it.

David (#16), Oumar has conducted himself with dignity.

Ross for some reason is being badly advised, and appears to be acting on that advice, and dare I say it, alienating himself from a lot of us who have/are supporting him through this current turbulent period in his career.

I can't see him breaking into any current top 6 squad, let alone securing a starting berth.