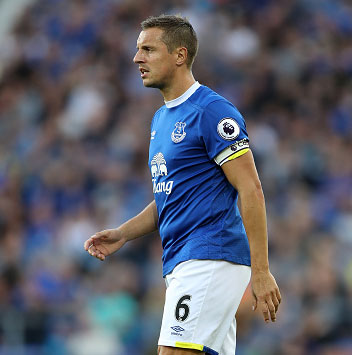 Phil Jagielka is expected to walk back into the side

Everton's season resumes this Sunday with a run of games to close out October that could have a huge bearing on their season.

The visit of Lyon in the Europa League and a trip to Chelsea in the League Cup loom as vital games but this weekend's match against Brighton and Hove Albion on the south coast carries huge importance as Evertonians look for a reaction to the dismal home defeat to Burnley last time out.

The Blues go into the match, their first league meeting with Brighton for 34 years, level on points with the newly-promoted side but two places lower because of goal difference, a worrying statistic given how Ronald Koeman appeared to have, for the most part, shored up the defence he had inherited from Roberto Martinez last season.

The Dutchman's side have shipped 12 goals in seven games and it is hoped that the anticipated return of captain Phil Jagielka following a hamstring strain can help instill some solidity at the back while the issue of who will score the goals at the other end continues.

Jagielka will provide a boost to Koeman's squad, which is still without the services of long-term injury absentees Seamus Coleman, Ramiro Funes Mori and Yannick Bolasie, while Ross Barkley and Aaron Lennon are also ruled out.

The manager was able to report better news with regard to James McCarthy, though, telling reporters at his pre-match press conference that the Irishman, having been allowed by Martin O'Neill to return to Finch Farm rather than be pressed back into international action prematurely, is back in full training.

On the assumption that Jagielka does start, perhaps in place of the beleaguered Ashley Williams or in a defensive three with the Welshman and Michael Keane, the biggest question marks will be over how Koeman lines up his attacking unit in the wake of much criticism of his formation in recent weeks.

Will Oumar Niasse start after failing to make the desired impact against Burnley, likewise for Nikola Vlasic, and what of the No.10s conundrum?

Gylfi Sigurdsson excelled for Iceland over the international break in his more natural central role and there is a clamour among supporters for Koeman to play him there rather that deploying him in a wide left role. It would mean dropping or re-accommodating Wayne Rooney in the side but he left the veteran on the bench for the start against Burnley and could do so against Brighton.

If there is pressure on the manager's shoulders, he doesn't seem to be betraying any effects of it or any acknowledgement of the shortcomings of his line-ups. Rather, he pointed again to an abbreviated pre-season and tough run of fixtures and the need for patience as his squad gels.

“We need to win, we need to change our situation in the table and that starts this Sunday,” Koeman said. “That is priority for me for the long term.

“We did not have a normal pre-season. We had to play really [quickly] competition to qualify for Europe and the schedule is so tough that you don't really have time to train and to improve.

“That is why I'm thankful that we are playing on Sunday. At least today we had a normal training session with a lot attention and focus on Sunday.”

Brighton began their first Premier League season with a creditable draw at Watford on the opening day before the harsher realities of the top flight took hold with back-to-back defeats to Manchester City and Leicester.

Since then, Chris Hughton has managed to engineer home wins against West Bromwich Albion and Newcastle before they lost in predictable fashion to Arsenal before the international break.

The veteran boss will be without Tomer Hemed, who is suspended, Sam Baldock and Beram Kayal.

Hughton, like some commentators have suggested during the recent analysis of what's gone wrong at Goodison Park, believes that Koeman has the ability to turn things around so, “as with all good players and good teams they will turn it around.”

He expects a difficult game against Everton but that will require a level of cohesion, fluidity and determination that has been sorely lacking from the Blues for much of the season. Hopefully the fortnight's break has allowed some more of the manager's methods, direction and approach to sink in and the renaissance can begin at the Amex Community Stadium this Sunday.