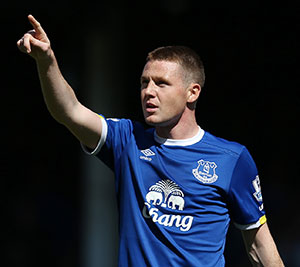 Everton U23s lost 3-1 to Wolfsburg in the opening fixture of their Premier League International Cup campaign at Southport.

This was the fist of the group games, which will see David Unsworth's men also face Derby County and Dinamo Zagreb, and it marked the return to action of James McCarthy.

The Republic of Ireland midfielder has been sidelined with a knee injury since July but he came through the first 45 minutes against Wolfsburg before making way at half-time.

Everton were ahead at that point thanks to Boris Mathis's opener and a brilliant stop by Louis Gray at the other end to deny Julian Justvan.

The German side were the stronger in the second half, however, and goals from Murat Saglam and substitute Abdallah El-Haibi turned the game on its head. Blaz Kramer added a late third to seal the win.

“McCarthy is doing full training but it's too soon to bring him in," first team boss Ronald Koeman had said of the midfielder last Thursday. "He will do some more training sessions, he will get more game time next Tuesday in the U23s and then I think he is back for the first team

“I'm not interested in [Roy Keane's] comments,” Koeman continued when asked his thought's on saracastic remarks made by Ireland head coach, Martin O'Neill's assistant suggesting that Everton's “scientists” should take more responsibility for the treatment of their player.

“The player had several problems physically. We tried to solve that problem and he's now back. For the first time they (Ireland) did a good thing by not playing the player in his current state of fitness.

“OK, we'd like to bring him back. He's an important player for us but we don't like to take risks and that's good for us and let's hope he'll be totally fit for next weekend.”