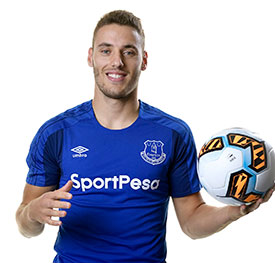 Nikola Vlasic has received a call-up from Croatia for their forthcoming World Cup play-off against Greece.

The 19-year-old was a rare high point over the final few weeks of Ronald Koeman's tenure as Everton boss and has been rewarded for his form with the chance to earn his second cap for his country.

Vlasic's first appearance for Croatia came in a friendly against Mexico in May but this will be his first senior cap since joining the Blues from Hajduk Split.


Alasdair Mackay
1 Posted 24/10/2017 at 07:46:25
We have so many good young players at the club. Vlasic, Davies, Lookman, Calvert-lewin, Dowell, Kenny, Keane, Pickford.
What we need is a manager with good experience of getting the best out of young players oh wait.
Stephen Smith
2 Posted 24/10/2017 at 08:11:42
Hope our new manager builds a vibrant young side we can be proud of with this young man playing a big part.
Erik Dols
3 Posted 24/10/2017 at 08:28:48
Early days and no guarantees, but this could be the best buy we made in years. I really like this kid. He's very young and will be hit-and-miss the coming two or three years, hope he grows to become the new Modric (albeit in a slightly different role/style of play). The potential is there.
Kim Vivian
4 Posted 24/10/2017 at 09:40:09
Congratulations Nikola. More good experience.

A potential Everton legend we have here.

I would have felt peeved with the way he was hung out by OFM in press and television interviews.

Brian Williams
6 Posted 24/10/2017 at 10:29:44
Agree Eric, and can't for the life of me understand some on another thread having a go at the lad when he was one of the very few positives from Sunday's debacle.
I wonder whether some just watch the highlights (there's a laugh) and make their mind up from those.
Sam Hoare
7 Posted 24/10/2017 at 10:35:48
I thought when we played them that he reminded me of Barkley but with a bit more fire. I was delighted when we bought him and so far am yet to change my opinion of him. Looks a real player at only 19.
Tony Heron
8 Posted 24/10/2017 at 11:04:14
Had my first proper look at him on Sunday and was well impressed. Not afraid to run at defenders, good control, intelligent. He's young and will make mistakes like the misplaced pass he gave on Sunday which led to a goal. I wouldn't really blame him for that either when Arsenal still had to move the ball 80 odd yards up the pitch. I also noticed how distraught he was, in stark contrast to some who when thier mistakes lead to goals don't seem to give a stuff.
Derek Knox
9 Posted 24/10/2017 at 12:11:59
I am made up for the lad, as I am for any of our squad to be selected, for their National side.

It can only be good as far as experience is concerned, just try to avoid injury please.

Seriously, he does look mint. He seems to get better each time I see him.

Nitesh Kanchan
12 Posted 24/10/2017 at 13:48:51
Congratulations to him. Hoping he can score winning goal for Croatia and they qualify for the World Cup. That will give him huge amount of confidence.

That aside, we need some quality German or Brazilian players in our side. Those two national sides are easily the best international teams right now.

Skilful kid with a great attitude who looks like playing for Everton means something to him. Loved that run on Sunday where he beat four men. I hope when he gets the pace of the game he'll stop giving the ball away, but Rooney did it just as much!

Pickford has limitations. He's short for a GK so any shot that goes over his head always seems to go in. He can't glove the ball. How many goals have we conceded where he can't hold onto the ball and gives the enemy a 2nd shot which is more often that not converted into a goal?

He's great at getting down low against low shots (because he is short), but awful at higher aimed shots. Keane looks lost at times. Jags is still the better option. Kenny is bang average, and poor when compared to Seamy at the same age.