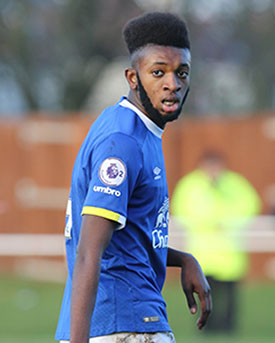 Everton were eliminated from the Carabao Cup at the hands of Chelsea but there was plenty of encouragement to take from a spirited second-half performance in which the Toffees dominated at Stamford Bridge.

Everton were understandably tentative in the first period but their strategy of containment came very close to succeeding in getting them to the interval on level terms. A lapse in marking for a Chelsea corner allowed Antonio Rudiger to put the home side ahead, though, making caretaker boss David Unsworth's task that much harder.

His side grew in stature, confidence and threat after half-time, however, and but for Willy Caballero, who made some vital saves in the Chelsea goal while also watching Ademola Lookman strike his crossbar, might have at least forced extra time.

Unsworth made a big decision with his first starting XI by naming rising Under-23s star Beni Baningime in midfield in place of the injured Morgan Schneiderlin who was a late scratch from the line-up, presumably due to a recurrence of the injury that kept him out of the weekend defeat to Arsenal.

That gave 19-year-old Baningime, who has been compared to the likes of N'Golo Kanté, the chance to impress.

James McCarthy returned to the team for his first appearance of the season, replacing the suspended Idrissa Gueye. Gueye missed tonight's game after picking up two yellow cards in the 5-2 defeat to Arsenal at the weekend.

Unsworth's selection also offered Aaron Lennon the opportunity to stake his claim after falling out of favour with Ronald Koeman but the chosen formation didn't have room for Dominic Calvert-Lewin or record-signing Gylfi Sigurdsson, both of whom are on the bench.

Nikola Vlasic, one of the brightest spots of Koeman's tenure this season, wasn't in the squad after picking up an injury against Arsenal. He underwent an x-ray on Sunday that revealed no damage but he likely sustained bruising that will benefit from the rest.

Also missing were two Koeman acquisitions in the form of Maarten Stekelenburg, overlooked in favour of Joel Robles, and Cuco Martina, as well as Davy Klaassen and Sandro Ramirez.

The two sides began in fairly even fashion, Rooney seeing the first opening in the fourth minute but he didn't do anything with it.

Chelsea began to assert themselves with about 10 minutes gone but the Blues were holding a disciplined back line and they too settled, winning the first corner of the contest in the 22nd minute.

The home side earned a corner of their own with 25 minutes gone when Jagielka could only scuff a cross behind and when the set-piece was taken short and a cross swung in, Rudiger found himself unmarked at the back post where he looped a header over Pickford.

A minute later, Zappacosta was cynically blocked off by Williams who picked up another yellow card for his trouble but Willian's free kick was cleared.

While Everton battled to carve out opportunities at one end, with Rooney isolated and unable to hold the ball up effectively when he had it, Batshuayi held off his man to get a shot away at the other 10 minutes before the break but Pickford wasn't troubled.

A giveaway by Williams just inside the Chelsea half set up a counter-attacking chance for Antonio Conte's side but Zappacosta lashed his shot into the side-netting with the visiting defence scrambling to get back.

No changes were made by either side at the break, but Mirallas seemed to have a wide brief to roam and support Rooney. Davies was shown a yellow card for one foul too many early in the second period and McCarthy followed him into the book shortly afterwards for a high boot on Kenedy.

The Blues carved out their best move of the match so far after 53 minutes when Baningime thundered into a tackle on Ampadu, the ball broke to Rooney but Kenny arriving on the overlap made a mess of the final shot, slicing well wide of goal.

Everton better was to follow a minute or so later when Kenny crossed, Mirallas cushioned a header to Rooney but he was foiled at point-blank range by Caballero.

The Chelsea keeper almost made a catastrophic error, though, passing the ball straight to Lennon but his touch was heavy and Caballero charged him down.

Another Everton corner arrived in the 59th minute but a lack of height meant they couldn't make it count. They stayed on the offensive, though, and Mirallas whipped a ball in that Lennon almost turned in, a defender getting a vital touch to guide it over the bar.

Chelsea countered quickly from the resulting corner and Jagielka ended up in the book when he scythed down Musonda.

Cesc Fabregas's introduction for Drinkwater with a little more than an hour gone gave Chelsea a more daunting look and Unsworth responded by bringing McCarthy off and throwing Calvert-Lewin into the fray.

And the young striker won a quick corner, again down the Everton left but Williams couldn't get enough on his header. Rudiger, meanwhile, took umbrage at Calvert-Lewin's challenge, hacked down Mirallas and picked up a booking of his own.

From that free kick, Jagielka looked to have flicked Baines's ball home but Caballero was there to push it away and the Argentine repeated the feat seconds later to parry Mirallas's shot away as it searched out the bottom corner.

With 17 minutes to go, Lennon made way for Lookman came within inches of finishing a patient probing Everton move but fired into the side-netting off Davies's pass.

Near calamity followed, though, at the other end. Rooney sold the defence short with a poor backpass, Batshuayi toed it past Pickford but Jagielka recovered brilliantly to hold the Belgian off and slide the ball behind.

Everton remained unbowed, however, and Lookman went even closer than before, grazing the crossbar with an excellent left-footed shot after cutting in from the right.

Chelsea effectively killed the tie in stoppage time when Willian exchanged passes with Fabregas from another short corner and the Brazilian raked a shot off the far post and into Pickford's net.

Determined work by Niasse allowed Calvert-Lewin to bundle in seconds later to halve the deficit but Unsworth and his side had run out of time.