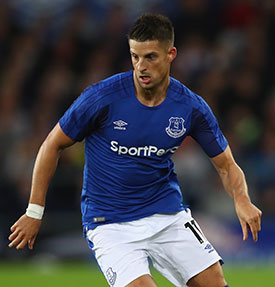 Kevin Mirallas has issued a public apology to Everton and expressed his commitment to the club following reports he was dismissed from training on Saturday.

Both the Belgian and Morgan Schneiderlin were said to have been ordered to leave Finch Farm by David Unsworth after disrupting a training session and were subsequently left out of the squad that faced Watford on Sunday.

Schneiderlin denied being sent away from training in a social media post yesterday and Mirallas has now issued a similar statement on Instagram where he does acknowledge acting out of frustration at not being selected for the first-team squad for a second match running.

“I have to restore the truth after some articles in the media,” he said. “I was not excluded [from] the squad due to a lack of commitment during training. [T]his was a manager decision and I was frustrated as I am fully committed [to] Everton since arriving in 2012 and I can't accept our actual ranking (in the Premier League).

“I apologize to the president and owner, my team mates and the manager for not being able to cope at that moment with my frustration.”

Like Schneiderlin, Mirallas has struggled for consistency this season and has been overlooked by David Unsworth since being substituted at half-time at Leicester the weekend before last.