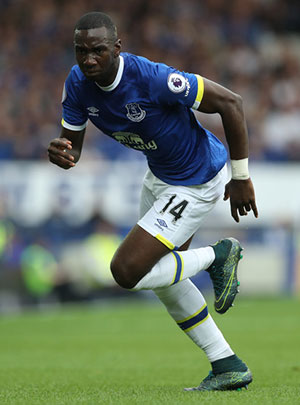 Yannick Bolasie has returned to first-team training after almost a full year out with a bad knee injury while Ross Barkley is close to making his own return.

The Congolese winger underwent two surgeries earlier this year to repair a ruptured cruciate ligament and damage to the meniscus in his knee and has been escalating his training over the past couple of months.

Bolasie trained with the Under-23s last week and joined the first team today to a "warm round of applause" from his team-mates according to the club.

"We had a light session this morning and [Yannick] trained with us and it was great to see him out there with the first team this morning," David Unsworth said in his press conference today.

He has missed almost a year on the sidelines with the injury but he is not expected to return to full action for another month.


Barkley, meanwhile, could be back on the pitch for the Blues next month as Unsworth provided an update on his situation following surgery of his own.

"James McCarthy [and] Ross [are] maybe a couple of weeks away," the caretaker boss said, "so they're starting to filter back in.

"There's still some conditioning work to be done with all those players but it's nice to see them back out on the grass. We need those players back as quickly as possible because they're top players."

Is it too late for Yannick to be charged with feigning an injury? :)

Good luck to him. Deserves to get back on his feet soon.

Minik Hansen
5 Posted 22/11/2017 at 16:57:45
Just what the dressing room and the fans needed, any kind of psychological boost. Brings hope to the time ahead. COYB!
Steve Ferns
6 Posted 22/11/2017 at 17:04:20
I hope he is able to regain full range of movement. It's a very nasty injury, and I am told that whilst he may play again, and may play well, he will never have the movement in his knee that he had before and even a slight reduction could completely wreck his game.

Nathan Jones
7 Posted 22/11/2017 at 18:05:45
It's funny how fans' perception of players get better, the longer they are injured. He was cutting a lot of slack when he first joined us. I think it'll still be some time before he's match fit and back to his best or as close to it as he can get.

While not a world beater, the biggest problem is a lack of pace and wingers, so it's just what the team needs.

Mark Rankin
8 Posted 22/11/2017 at 19:16:48
I remember thinking, prior to Bolasie signing, that Everton had, for the most part, done very well to dodge the very expensive duds. Even when they'd not set the world alight, we palmed a few of our other expensive signings off for decent cash. Bolasie seemed to be the starting point where we began spunking it up the wall.
Jon Withey
9 Posted 22/11/2017 at 19:25:39
Agree, Mark – £25m for him, then Schneiderlin, Klaassen, Sigurdsson – I can't even be proud of our spending record anymore... relatively decent players but no sell-on value and not worth that cash in the first place.
David Pearl
10 Posted 22/11/2017 at 23:40:30
Yes we seem to have learnt nothing from the RS or Spurs. Watching them spend millions on average players. However... it is great to have him back in training. He's just what we need to supply our erm, ya know, our striker!

These players, Yannick, Ross and Macca are of a higher quality than than the players we have bought in. I'm sure we were supposed to buy better to improve. But what would I know.