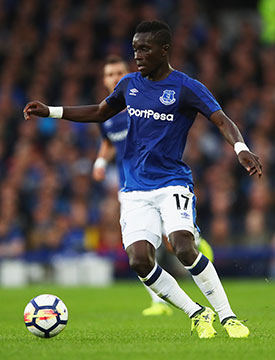 Idrissa Gueye is expected to be out of action for around three weeks, according to his international manager, Aliou Cisse.

Cisse revealed to reporters yesterday that the Everton midfielder arrived at Senegal's training camp with a "muscle tear" which, given his prior injury this season could be a recurrence of a hamstring problem.

"My squad is almost complete, but Gana had a muscle tear when he came over," he said. "I had wanted him to be in my team, but I think he will be out for three weeks.

"I wanted him to come over with the rest of his national teammates, so we could assess his injury. He was able to do so."

If the assessment from the Senegal national team's medical staff is correct, Gueye would miss his country's friendlies with Uzbekistan and Bosnia-Herzegovina and the Blues' upcoming home games against Manchester City and Liverpool.


Paul Setter
1 Posted 22/03/2018 at 06:32:16
Can't say I'm that bothered... 3 tackles a game? Surely we have someone that offers more than “most running around all game”.
Derek Thomas
2 Posted 22/03/2018 at 07:22:54
Get Beni in, sorted... Keep Schneiderlin out, double sorted.
Colin Glassar
3 Posted 22/03/2018 at 07:30:48
Can’t we just forfeit the rest of the season as we are virtually safe? Just bring this embarrassing, and painful, campaign to an end.
Steve Hopkins
4 Posted 22/03/2018 at 07:46:03
I say stick Schneiderlin back in, see whether being dropped and booed by his own fans has improved his attitude; if not, sack him off for the last games and get rid in the summer. This season is a complete write-off and Beni will be around for the new one.
Jim Bennings
5 Posted 22/03/2018 at 08:00:00
Playing Baningime against Man City and Liverpool would be a gross mistake, are people not seeing Tom Davies being eaten alive in that midfield battle this season? These young kids are only better in people's imaginations because they are unexposed but it's ruthless to put them in against top class opponents.

Playing Rooney in the middle with Davies is about as much as we can do with Bolasie and Walcott our wide with maybe Niasse supporting Tosun is my way to go, we got to give Man City and Liverpool something to worry about not just sit there with umpteenth central crab-like midfielders that don't move forward.

Man City and Liverpool coaching preparation will consist of the players watching videos of teams with five-man defences who managed to strife both of these teams play getting a result. May show the last Merseyside derby. That's if Big Sam doesn't decide to rest his players for the winnable game after these two fixtures. It depends how sure he is of getting a contract extension. This is a good way of assessing how negotiations are going,

The current First Team, under Big Sam, are used to swimming in the shallow end of the Premier League; once they go to the deep end, they sink. Things are this bad.

Gareth Clark
7 Posted 22/03/2018 at 10:36:26
I see people commenting that it's too early for Baningime... unfortunately you're wrong, he has been absolutely amazing and so calm & if anyone deserves a chance, it's him.

Although I see Schneiderlin being the change.

My team for Man City:

I think Davies needs a break & Klaassen deserves a chance, he will work so hard and that's what we need. 3 in midfield to congest that area, Rooney playing deep & looking for the outlet pass to the wings or into Tosun. Klaassen box-to-box. Walcott and Calvert-Lewin stretching them coming back on defense. Calvert-Lewin also gives us a much better chance of winning headers and creating chances from second balls. Tosun holding the ball up so that we can move up the pitch and distributing to the wingers.

We can also easily shift to a 3 at the back with the introduction of Funes Mori. Davies to add a box-to-box or Schneiderlin to solidify (we hope) the midfield. Bolasie and Niasse, explosive and workrate off the bench too.

Peter Gorman
9 Posted 22/03/2018 at 13:17:01
Beni Baningime is coolness personified – plays the game with simple efficiency, much like Gana used to before everybody started griping he didn't score enough.

I'd have no hesitation playing Beni; even if he has a pair of shockers, he will learn from it – all part of his development. I doubt he would though.

How will anyone know if Baningime is good enough if he remains untried? How did Rooney, Sterling, Ali, Kane and lots of others come through?We all know what Schneiderlin brings to the table and Klaassen has also had chances to shine. Vlasic is another who has not had a fair shake in my opinion.

Alardyce is opting for experience over youth in his first team selections and we all know that our midfield lacks pace and cannot cope with fast moving attacks who just run past them. We are doing okay to retain survival and that is all Big Sam really needs to justify his job.

In the longer term, all Evertonians want the chance of success at least and no-one will know how well our kids are developing if they are never to be tested. With Gueye injured and the 40 points secured, then it should be time to see what our youngsters are made of.

Alan J Thompson
11 Posted 22/03/2018 at 13:56:41
He'll pick Schneiderlin for no bloody good reason. I'd sooner play with 10 men!
William Cartwright
12 Posted 22/03/2018 at 15:13:27
Unfortunately, living overseas, I don't get the chance to see live games as much as I would like, and I haven't seen Baningime play except on TV. However, what I have seen has been excellent, and his support from the fans seems very consistent and I can't understand how Schneiderlin has been picked instead of him.

Is he really as good as Unsy and ToffeeWebbers think and what aspects of his game are the strongest?

Defensive midfield is not a position you normally expect a very young player to break through in and apart from needing another stick to beat Allardyce with, I am really interested to get more of an understanding of what qualities he can bring to the team.

Man City's (and Spurs') massive asset is their full backs joining the attack, pressing and keeping the other full-backs guessing. By playing wingers or 3 midfielders, we play into their hands as they will continually double up on our full backs, allowing their wingers to drift inside causing confusion and mayhem for the centre-backs.

I think we need to counter this by playing two defensively disciplined wide midfielders who are capable of swinging early, quality deliveries into the depths of Man City's half, then trying to pounce on a flick-on. It will be a lonely thankless task for the striker given the nod, and will need a central midfielder with the legs and eagerness to break forward every time the ball is with a wide player, while getting back just as quickly. Ideally this would be Sigurdsson.

Right Midfield: Rooney – he has played disciplined games before and has shown in the derby how effective a ball he has got from these areas.

Left Midfield: Garbutt – he has one hell of a delivery and will be defensively minded enough to help Baines. Plus at left midfield, he is not that accountable last line of defense, so will release pressure on him.

Central Midfield: Baningime – he will tackle everything in sight, while leaving Schneiderlin to mop up behind him.

Central Midfield: Davies – I don't see anyone else to play the role of surging forward and getting back equally as quick, unless we take a punt on Klaassen.

Centre-Forward: Calvert-Lewin – causes far more problems than Tosun (without the goal threat) and Man City will have bad memories of him from the first match.

We still have Walcott, Bolasie and Tosun to throw on if it goes wrong.

Must be another one due seeing as we are playing those twats!!! I wonder if Klopp has chosen the ref yet?

Forget Schneiderlin, he opted out ages back. Other than that, keep the same team. Only make enforced changes.

There is one change we should make before the next game:

Not content with so much poor form, we finally get some injured players back and now Gylfi, Holgate and Gana are all out.

What a disaster it has been and could only have been surpassed if they had been relegated.

Somebody at Goodison angered the gods!!

He should have stayed back home surely.

The club are required to release the player if his country insists on it. That is to prevent clubs doing what many used to do – withdrawing players from international squads on spurious grounds.