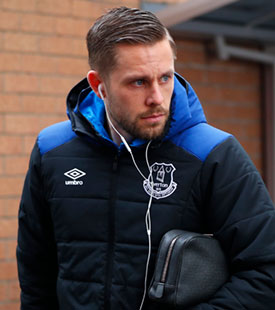 Gylfi Sigurdsson says he is feeling the benefits of his rehabilitation work as he bids to recover from the injury he sustained earlier this month.

The Iceland international damaged his knee during the home win over Brighton & Hove Albion but managed to play the full 90 minutes before learning the extent of the problem.

Scans revealed no significant ligament tear but the initial prognosis by Everton's medical team, one contested by manager Sam Allardyce, was pegged at between six to eight weeks.

That means he stands a good chance of being fit for the World Cup in Russia and could, perhaps, play for the Blues before the Premier League season is out.

“It is going well and I am steadily making progress each day,” Sigurdsson told evertonfc.com. “I have not had any setbacks, I am off the crutches and out of the brace and almost back to walking normally.

“The medical team have been really good and kept me busy in the past few weeks, they want to get the work in.

“We have been working on getting the swelling down and the fluid out of the knee – and getting some movement back into the knee.

“I am seeing the specialist in London next Tuesday, he will reassess me and we will take it from there.”

Everyone has injuries during their career and you just have to get through it.

“I am not very patient, I have to be honest. I like to get things done quickly. But I know this is going to take time and I will have to be patient and make sure I am not rushing it.

“The body will take its time to recover and I have to listen to it. I have been very lucky with injuries in my career and, hopefully, I will come back stronger and fitter than ever."


Dermot Byrne
1 Posted 26/03/2018 at 19:33:30
Go for it lad. Showing why we bought him recently imho. With changes we all hope for, I think he could become a player we look back on fondly.
Bill Gienapp
2 Posted 26/03/2018 at 20:38:25
I really hope he's fit for the World Cup. Would be such a shame for him and for Iceland if he's unable to play.
Mike Gaynes
3 Posted 27/03/2018 at 02:36:23
Right on, Bill. A nation of 334,000 people holding its collective breath at the moment. With my own country out of it, I'll be supporting them at the World Cup.
William Cartwright
4 Posted 27/03/2018 at 04:20:49
Excellent player, not responsible for setting his fee, made it clear he wanted to join Everton, played as well as he could given a poor summer's preparation, played out of position under 3 different managers, never once complained, continued to work hard throughout the season, showed patience and class – no nonsense media drivel, also showed signs that he really is a world class No 10, a potential rival to Seamus for the captaincy, an all round gentleman and super player we should be building the team around.

Only Everton could mismanage a player to this extent and not learn from their stupidity. I really hope he gets fit for the World Cup and I will be following Iceland for sure.

Jay, surely the last adjective you could ascribe to Sigurdsson is "solid", in any sense of the word.

Martin Reppion
7 Posted 27/03/2018 at 11:05:26
Sigurdsson has been one of the highlights of a poor season. Despite, as said above, being played out of position and being in and out of the team, he has always shown a willingness to put in a shift and show his class.

Frankly, if he isn't fit for us this season, I hope he doesn't go to the World Cup. I want him fresh and raring to go for us in August. But I am sure, like any player, he will want to play – even if he is on one leg.

The same goes for all the blues on international duty. I will support them (except when playing against England). But I hope they get back in one piece.

I also hope his rehabilitation is not rushed in any way. It would be sad for all the if the injury reoccurred after one or two games.

Don Alexander
9 Posted 27/03/2018 at 11:43:11
He's proven himself for several seasons since his Spurs days to be a very good footballer indeed for a side who are not top-notch. He has vision beyond the abilities of many team-mates but if he plays all the time in the no.10 role, rather than having to fill in on the wing or wherever, we'll see way more from him and them.

Compared to Pogba he's been a bargain in terms of fee!

Steve Ferns
11 Posted 27/03/2018 at 13:13:08
Gylfi Sigurdsson is one of our best players (bloody well should be for the fee paid). I think he's had a solid but unspectacular season. Sure, there's been a few spectacular goals, none more so than his first, and some moments of magic.

I would say that he is quite some way short of excellent. He's very good, and recently has become consistently so. But let's not build him up to be better than he is. He would not get into the best XI of any of the top 6. However, whilst Ozil at his very best is one of the very best in the world, Gylfi is more consistent and I think his median performance is better than that of Ozil.

As for position, I wouldn't play him as a Number 10. I think we are much better without a Number 10. When we play a more standard 4-3-3 with two wide forwards, and Gylfi deep so he can get on the ball early and make attacks happen faster, then this is where we and he are at our best. Otherwise, we require another deeper player to get him the ball, and I don't think he's good enough inside the penalty area. He's better initiating attacks and arriving late to strike from outside the box or play through balls.

As for Iceland, makes a nice story for sure, but selfishly, I'd rather he was resting at home and started the season fresh. No doubt he will be rushed back like Beckham or Rooney was, won't quite be fit enough, then will break down, and then will miss the start of the season. We're Everton, you know what our luck is like.

Tom Bowers
12 Posted 27/03/2018 at 14:25:11
He's obviously a talented player who's taken time to settle in but was coming good when he got injured. No need to rush him back with only 7 unimportant games to go (except the derby match).

With the right changes next season we will see the best of what he has to offer.

I was going to say yes he is good, I'm happy to see him in an Everton shirt (always have been)... but £45m? It still seems unreal.

Keep up the good work, Sigurdsson.

I prefer the 4-3-3 too, our attacking threat has gone from zero to 5/10 in a matter of weeks . This is all down to Walcott. Defenders just can't commit when he is around.

Quality with pace to burn wins matches and I see the ultimate nightmare for the defences of the bottom 14.

Now with Tosun getting on the end of decent balls in confidence is seeping back. like the first rains on the barren Serengeti.

All we need now is to swap Bolasie for Salah on the other side. Failing that, I have got high hopes for Lookman filling the role.

Lenny Kingman
17 Posted 27/03/2018 at 18:43:26
£45 million for an Icelandic footballer, playing or not, for Everton, hopes to be at the World Cup. Surreal.
Paul Ellam
18 Posted 27/03/2018 at 19:37:26
Great player, can't wait to have him back.
Brian Porter
19 Posted 27/03/2018 at 23:48:53
I feel the only way we will ever see the best of Sigurdsson (and players like Vlasic and Lookman), is if Allardyce is given his marching orders and a new, more attack minded coach /manager is brought in to replace him. Allardyce doesn't have an attacking bone in his body and all our creative players will continue to struggle or get game time with him in charge.

We have some great prospects for the future at the club, many of whom we risk losing as they become more and more disillusioned with their lack of opportunities under Allardyce. Same goes for Sigurdsson, who we will only see the best of if he is played in his best position rather than out wide as Allardyce insists on using him.

Peter Gorman
21 Posted 28/03/2018 at 01:18:33
Always a pleasure to see our players turn out at the World Cup but after this year I'll be more interested in spotting potential replacements. Siggy might as well focus on a steady rehabilitation as there is nothing to gain from playing for us again this season.
John Malone
22 Posted 28/03/2018 at 11:17:04
He's getting better for us; a decent player – I wouldn't call him 'great'. Nowhere near as good as Christian Eriksen of Spurs.

Hopefully he'll be fit for the World Cup but Iceland go home early; nice rest for him before the start of our season.

A poor player who lacks pace and couldn't spot a pass to save his life. I've seen milk turn quicker and – apart from the odd good goal – he has done nothing to justify the astronomical fee we paid for him.

And to think that clown Koeman spent all summer chasing him whilst neglecting other more important issues... No wonder we are shit.