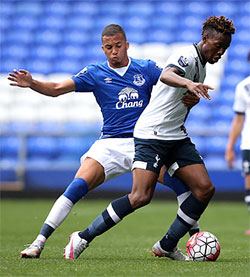 David Henen's career with the Blues appears to over based on a message the Belgian forward posted to Twitter today.

Henen, whose departure from the Blues has been mooted for a while now, tweeted his thanks to a "wonderful club" for three great years, a hint that he will be leaving as a free agent now that the Under-23s season is over.

Signed by Roberto Martinez as a teenager on loan and then permanently via a complicated transfer from Anderlecht to Olympiakos, Henen was regarded as potentially being the next striking talent off Belgium's production line following the emergence of Romelu Lukaku and Michy Batshuayi.

He never truly caught fire at Under-23s level but has been a regular for David Unsworth's team this season, often deployed more as a winger than an out-and-out striker.

A transfer back to France was rumoured to be in the offing towards the end of both of the last two transfer windows but never materialised for the former Monaco loanee.

The season is over, finish with 5 goal 7 assists in 15 games for u23 + ( 3 goals 6 assists in 4 pre-season games). It was 3 great years for this wonderful club especially last season when we won the league 💙 thank you for your support during this years 😃