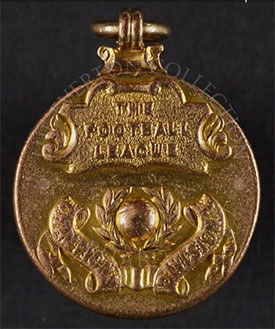 One of the most cherished medals in Everton's history is coming home, writes David Prentice in the Liverpool Echo.

The League Championship medal presented to Dixie Dean after his record-breaking 60-goal season in 1927-28 will be back at Goodison Park - on the eve of the 90th anniversary of the legendary centre-forward's iconic achievement.

And fans are being invited to see it at a special celebration event at the People's Club Lounge at Goodison Park on Friday, 4th May.

The medal was sold at auction in Glasgow in 1991 to Gordon Wallis. On the night Gordon will reveal for the first time an unexpected personal story linked with the Dean medal purchase.

Tickets for ‘Dixie Dean — the legend of 60 goals' event are £10 each and are available now.

Now, when any half-decent League One player earns enough to put away a pension for life so he'll never have to work again, and average Premier League players make more on one contract than most of us could ever spend, clubs build monuments to them and welcome them back as supermen.

We live in strange times.

Dave Abrahams
5 Posted 26/04/2018 at 11:08:33
Martin (4), and give them the opportunity to have benefit matches when they retire from football already millionaires.
Ray Roche
6 Posted 26/04/2018 at 11:33:49
Dave, to be fair, the proceeds from the Testimonial matches granted to footballers these days usually go to the player's favourite charity. Claire House and Rainbow Trust and the Make A Wish Foundation benefitting from Osman and Hibbert.

When Dean was granted one in 1964 and a gate of about 38,000 turned up, it was Dean who got the much-needed cash, because he had fallen on fairly hard times, as did Lawton who was also given a Testimonial.

Phil Parker
7 Posted 26/04/2018 at 12:20:23
I saw the medal collection on display at the Adelphi in 1991 before the auction was held in Glasgow, remember thinking I could maybe have bought his Baseball medal, it went for £60. Went to the great man's funeral in 1980. Had to be there, he IS Everton. Look forward to a fitting night next Friday.
Mark Smith
8 Posted 26/04/2018 at 13:04:19
My father was in hospital with heart failure. I took him the Dixie Dean story and the look of joy in his face remains with me some 25 years later!
Dave Abrahams
9 Posted 26/04/2018 at 14:43:15
Ray (6), yes I'm aware of all that Ray, I went to both Dixies and Tommy's benefit games and didn't mind them, both deserving causes, along with Eddie Spicers and Billy Liddell's of Liverpool especially Eddie Spicers whose career was finished through injury, add them to Brian Labone's who didn't earn fabulous money.

I don't believe modern players don't get anything from these games and I support charities of my choice when I donate.

I can't see many players staying at a club for 10 years in today's climate. When you think that the two clubs could field two teams of Scottish and English players — amazing by today's standards.

Dave Abrahams
12 Posted 27/04/2018 at 12:33:48
Ray (#11), no problems, Ray, I didn't feel patronised, it is just two different viewpoints on the same subject.
Ray Roche
13 Posted 27/04/2018 at 12:46:35
Dave, I've read the sad story of Lawton approaching Dicky Attenborough for money when he was skint. Sad that our former heroes have had to resort to selling World Cup medals, shirts etc to see them through their old age.
Colin Glassar
14 Posted 02/05/2018 at 09:09:46
If William Ralph Dean hated the racially inspired name ‘Dixie’ so much why has it not been changed? I’m not one of these revisionist PC nutters but if I was called Darkie as a young man, and hated it, I don’t think I’d want to be known by that name for the rest of my life and beyond.
Mick Conalty
15 Posted 02/05/2018 at 15:30:07
One of the pundits on radio TalkSport (TalkShite) said Alan Shearer was the record league goal scorer on 38 goals. Obviously football did not start till the Premier League started and, if that is the case, England never won the World Cup. The modern arrogant football commentators think they can re-write history.
Colin Glassar
16 Posted 03/05/2018 at 07:49:19
Mick, I was at a wedding on Saturday and a young lady asked me did I support LFC and I said "No, Everton." She replied “Who are they?”

Our history means absolutely nothing to the outside world apart from being an unimportant footnote.

Terry Underwood
18 Posted 07/05/2018 at 13:28:09
Lots of talk about ex-players falling on hard times. Surely that situation no longer exists with the advent of the workplace pension. As I understand it, the pension is transferable between employers so modern day players should be able to fall back on a reasonable income once they reach pensionable age.