T.G. Jones biography shortlisted for Sports Biography of the Year 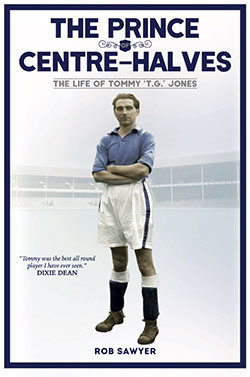 Rob Sawyer's brilliant biography of legendary Everton defender T.G. Jones is up for 2018 Sports Biography of the Year.

Published in 2017 by DeCoubertin Books to coincide with Jones's centenary year, The Prince Of Centre-Halves: The Life Of Tommy TG Jones uncovers the true story of this enigmatic football figure who played 178 times for the Toffees either side of World War II.

Utilising a mixture of archive material and interviews with those who knew Jones and saw him play, Rob paints a compelling picture of a brilliant footballer and outspoken and complicated man.

Rebel, pioneer and football genius this is the definitive story of one of the game's forgotten heroes.

The shortlists for this year's Sports Books of the Year awards were announced at a ceremony in London this morning and the winners will be announced at a dinner at Lords on 7th June.

The winners of each category then go to an overall Sports Book of the Year award vote, overseen by The Times.

A noted Everton historian and member of the Everton Heritage Society, Rob is, of course, a lifelong fourth-generation Evertonian and a historical columnist at ToffeeWeb.

The Prince Of Centre-Halves is available for purchase from DeCoubertin Books for £15.99